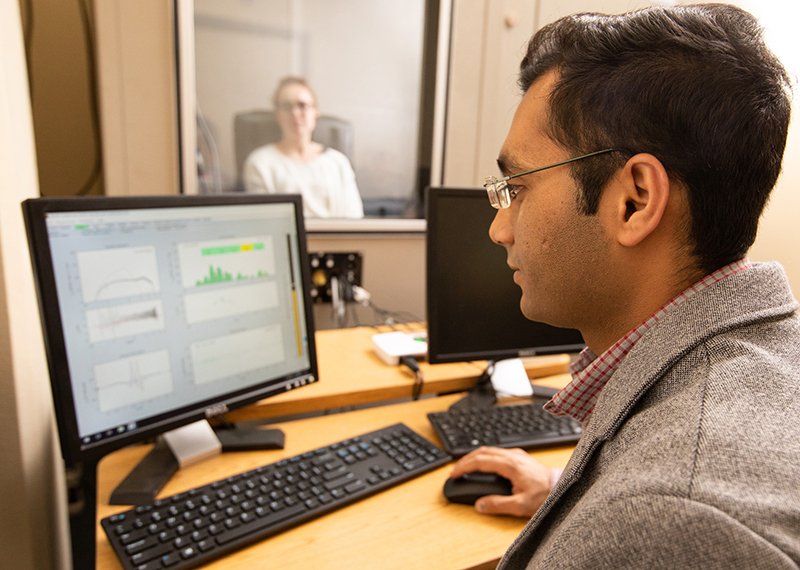 There is no known cure, and there are no FDA-approved medications developed specifically to treat it. The fact is, tinnitus is very common but not well understood. A better understanding of its causes could eventually improve the lives of millions of people throughout the world. That’s why a team of researchers, led by Ishan Bhatt, NAU assistant professor of communication sciences and disorders, recently launched a three-year study investigating whether genes influence tinnitus perception. Funded through a National Institutes of Health grant of $455,982, the project’s long-term goal is to construct a genetic risk profile that can be used by health care providers and educators to identify individuals genetically at risk for chronic tinnitus and help them prevent the condition.

Bhatt’s collaborators on the project are co-investigator Jason Wilder, professor of human genetics and genomics, who will oversee the genetic analyses; co-investigator Jin Wang, associate professor of statistics, who will provide statistical expertise; and Raquel Dias, a senior staff scientist at the Scripps Research Institute, who will consult on bioinformatics. “We don’t have much information on how genes influence this disease, so we’re investigating genetic association to tinnitus,” Bhatt said.

Doing so could influence three areas of future treatment:

To isolate any genetic link from other causes of the condition, the team will study healthy young adults with tinnitus. Bhatt’s team is distributing screening questionnaires throughout the university to find 300 healthy subjects among the student population on NAU’s Flagstaff campus. Study participants will be invited to Bhatt’s Auditory Research Lab, where the team will assess hearing health measures and collect saliva samples for DNA analysis.

Bhatt hypothesizes that acute tinnitus is predominantly caused by environmental factors, whereas chronic tinnitus (such as having bothersome tinnitus for less than a year) is predominantly influenced by genetic factors. “The beauty of the population of healthy young adults is that they don’t exhibit age-related confounding factors and tend to exhibit almost no tinnitus-related distress,” Bhatt said. “By studying healthy young adults who are not exposed to the extremely traumatic environments that other adults—such as factory workers, military personnel and musicians—might have experienced, the project expects to control for the adverse effects of environmental and age-related confounding factors on tinnitus.”

The study is already underway, and Bhatt expects the sample size will grow. The screening questionnaire is circulating, and the team will collect and analyze data until December 2021. A clinical doctoral student will soon join the study to collect the audiological data and oversee the logistics. Bhatt is certain this study is just the beginning. “We hope to collect enough pilot data so we can ultimately conduct a large-scale genetic analysis and construct a clinically useful genetic risk profile for tinnitus,” he said.