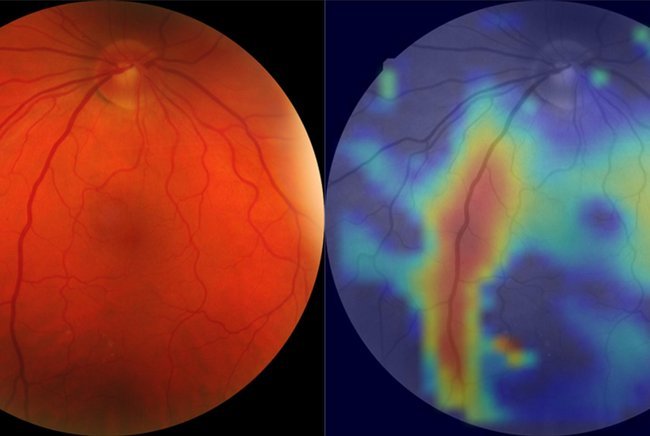 Left: Image of the retina. Right: Output of our AI model, which shows the important regions in red. This example is from someone with Type 2 diabetes.

Eye doctors make use of advanced imaging techniques to assess the health of the cornea and retina in the eye. For example, high resolution images can be used to check how successful corneal transplantation surgery has been, or if the retina is showing early signs of type 2 diabetes. Detailed analysis of these images can take a lot of time, which is impractical in standard clinical practice given the urgency there can be with diagnosing a disease like diabetes.

Friso Heslinga, from the Medical Image Analysis group at TU/e, worked together with hospitals in the Netherlands and Denmark to obtain eye images from patients with various eye problems. Using deep learning, Heslinga built computer models that can do automatic analysis and support eye doctors in providing proper patient treatment.

The cornea of the eye, which is found at the front of the eye, is transparent to light. The light passes through the cornea, and is then focused by the lens onto the retina where it interacts with photoreceptor cells to generate signals for the brain to process.

This cornea transparency is also used by ophthalmologists (or eye doctors) to look into the eye using several medical techniques. For example, special microscopes can image the tiny cells of the cornea, laser-based techniques are used to scan different layers of the eye, and using a simple extension tool for a camera, "normal" photos of the retina can also be obtained.

For instance, just knowing that the cornea is thicker than average is already an indication of an underlying condition. However, it would be better to have detailed cornea thickness maps to help quantitative the corneal thickness.

For his Ph.D. research, Heslinga developed artificial intelligence models, which were trained using supervised deep learning, to automatically measure corneal thickness at every point in the eye and construct a detailed thickness map. In addition, he came up with a way of ensuring that the maps are always centered. "Doctors can study how cornea thickness evolves and where the changes take place over several examinations. This can be very useful to assess the success of corneal surgery," notes Heslinga.

Another corneal-related treatment that Heslinga looked at was corneal transplantation surgery, which involves the attachment of donor cornea tissue to the inside of the patient's own cornea. This can be a difficult process for surgeons as during surgery they have to ensure that the donor tissue is not upside-down. If it is upside-down, then it cannot be attached to the existing cornea.

"To help surgeons with their task, along with our collaborators from the ophthalmology department at University Medical Center (UMC) Utrecht, we developed a method to automatically assesses the images of the cornea tissue during surgery to check for the correct orientation," says Heslinga.

Added to that, after transplantation surgery, it is important to monitor the donor tissue and see if it stays attached to the old tissue. "So together with corneal specialists from the Rigshospitalet–Glostrup in Copenhagen, we designed a method that finds any spots were the donor tissue is detaching from the underlying tissue."

Similar to the corneal thickness maps, these results can then be provided to ophthalmologist to establish the success of the transplantation procedure and help determine if further treatment is needed.

Furthermore, Heslinga studied images (or fundus photographs) of the retina. "Previously, studies have shown that automatic image analysis can be used to check whether the retina has been damaged, especially if the patient has had diabetes for an extended period without successful treatment," says Heslinga. "However, at that point, the damage to the retina should be quite visible, and so far, no studies have been able to automatically detect early stages of diabetes."

Heslinga and his collaborators created an artificial intelligence model that can distinguish between retinal images from people with type 2 diabetes and images from those with normal glucose metabolism, and even prediabetes. "This was only possible thanks to the collaboration with The Maastricht Study, which has over 50,000 photos available for the training and testing of his model," the researcher adds.

Heslinga's techniques still need extensive clinical testing and validation before they can be used in hospitals, but he is optimistic that in the near future artificial intelligence will be supporting ophthalmologists in many ways.

"I envision a future where my models and techniques play a key role in treating corneal and retinal issues in countless patients around the world," says Heslinga. "These are new tools to help future eye doctors do the very best for patients, and it's all about using a little AI for the eye."

In surgery, artificial intelligence (AI) is applied mostly in imaging, navigation, and robotic intervention. However, AI can also play a major role in preoperative planning. Objective…

Many consider our eyes to be the windows to the soul. Yet the cornea, the panes of these windows, sometimes need significant repair. Friso Heslinga, PhD, created artificial intelligence models to…

Researchers at Karolinska Institutet have developed an AI-based tool that improves the diagnosis of breast cancer tumours and the ability to predict the risk of recurrence. The greater diagnostic…