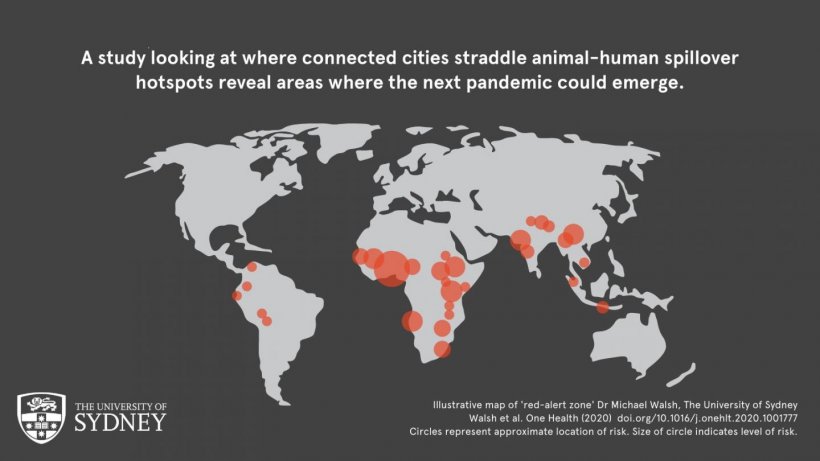 Areas exhibiting a high degree of human pressure on wildlife also had more than 40 percent of the world’s most connected cities in or adjacent to areas of likely spillover, and 14-20 percent of the world’s most connected cities at risk of such spillovers likely to go undetected because of poor health infrastructure (predominantly in South and South East Asia and Sub-Saharan Africa). As with COVID-19, the impact of such spillovers could be global.

Led by the University of Sydney and with academics spanning the United Kingdom, India and Ethiopia, the open-access paper shows the cities worldwide that are at risk. Last month, an IPBES report highlighted the role biodiversity destruction plays in pandemics and provided recommendations. This Sydney-led research pinpoints the geographical areas that require greatest attention.

Digital epidemiology in the Covid-19 war

Digital epidemiology is on the frontline in the Covid-19 war, with innovative techniques used to observe and monitor this viral spread across populations. Its increasingly important role was outlined to a virtual session at Medica 2020 by theoretical biologist Professor Dirk Brockmann. In a keynote presentation ‘Perspective of digital epidemiology – opportunities, promises and challenges’,…

Lead author Dr Michael Walsh, who co-leads the One Health Node at Sydney’s Marie Bashir Institute for Infectious Diseases and Biosecurity, said that previously, much has been done to identify human-animal-environmental hotspots. “Our new research integrates the wildlife-human interface with human health systems and globalisation to show where spillovers might go unidentified and lead to dissemination worldwide and new pandemics,” said Dr Walsh, from the University of Sydney’s School of Public Health, Faculty of Medicine and Health.

Dr Walsh said that although low- and middle-income countries had the most cities in zones classified at highest risk for spillover and subsequent onward global dissemination, it should be noted that the high risk in these areas was very much a consequence of diminished health systems. Moreover, while not as extensively represented in the zone of highest risk because of better health infrastructure, high-income countries still had many cities represented in the next two tiers of risk because of the extreme pressures the affluent countries exert on wildlife via unsustainable development.

The researchers took a three-staged approach:

“This is the first time this three-staged geography has been identified and mapped, and we want this to be able to inform the development of multi-tiered surveillance of infections in humans and animals to help prevent the next pandemic,” the paper reads.

Of those cities that were in the top quartile of network centrality, approximately 43 percent were found to be within 50km of the spillover zones and therefore warrant attention (both yellow and orange alert zones). A lesser but still significant proportion of these cities were within 50km of the red alert zone at 14.2 percent (for spillover associated with mammal wildlife) and 19.6 percent (wild bird-associated spillover).

Dr Walsh said although it would be a big job to improve habitat conservation and health systems, as well as surveillance at airports as a last line of defence, the benefit in terms of safeguarding against debilitating pandemics would outweigh the costs. “Locally-directed efforts can apply these results to identify vulnerable points. With this new information, people can develop systems that incorporate human health infrastructure, animal husbandry, wildlife habitat conservation, and movement through transportation hubs to prevent the next pandemic,” Dr Walsh said. “Given the overwhelming risk absorbed by so many of the world’s communities and the concurrent high-risk exposure of so many of our most connected cities, this is something that requires our collective prompt attention.”

Recovery from severe Covid-19 is characterized by a reduction of certain white blood cells and changes in the molecular regulation of the immune system, an international research team found.