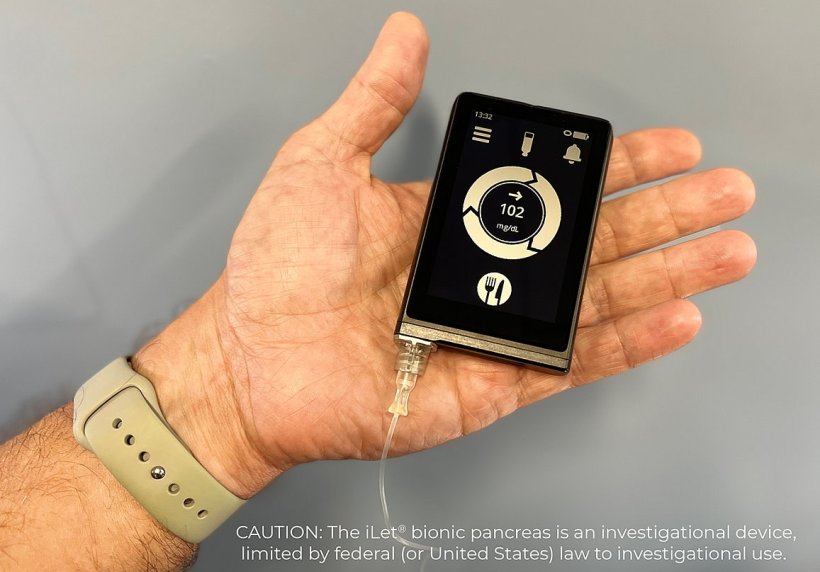 Compared to other available artificial pancreas technologies, the bionic pancreas requires less user input and provides more automation because the device’s algorithms continually adjust insulin doses automatically based on users’ needs. Users initialize the bionic pancreas by entering their body weight into the device’s dosing software at the time of first use. Users of the bionic pancreas also do not have to count carbohydrates, nor initiate doses of insulin to correct for high blood glucose. In addition, health care providers do not need to make periodic adjustments to the settings of the device. “Keeping tight control over blood glucose is important in managing diabetes and is the best way to prevent complications like eye, nerve, kidney, and cardiovascular disease down the road," said Dr. Guillermo Arreaza-Rubín, director of NIDDK’s diabetes technology program. “The bionic pancreas technology introduces a new level of ease to the day-to-day management of type 1 diabetes, which may contribute to improved quality of life.”

This system can safely improve glucose control to the degree we found, and do so despite requiring much less input from users and their health care providers

The 13-week trial, conducted at 16 clinical sites across the United States, enrolled 326 participants ages 6 to 79 years who had type 1 diabetes and had been using insulin for at least one year. Participants were randomly assigned to either a treatment group using the bionic pancreas device or a standard-of-care control group using their personal pre-study insulin delivery method. All participants in the control group were provided with a continuous glucose monitor, and nearly one-third of the control group were using commercially available artificial pancreas technology during the study.

In participants using the bionic pancreas, glycated hemoglobin, a measure of a person’s long-term blood glucose control, improved from 7.9% to 7.3%, yet remained unchanged among the standard-of-care control group. The bionic pancreas group participants spent 11% more time, approximately 2.5 hours per day, within the targeted blood glucose range compared to the control group. These results were similar in youth and adult participants, and improvements in blood glucose control were greatest among participants who had higher blood glucose levels at the beginning of the study. “Our observation that this system can safely improve glucose control to the degree we found, and do so despite requiring much less input from users and their health care providers, has important implications for children and adults living with diabetes,” said Dr. Steven Russell, study chair, associate professor of medicine at Harvard Medical School, and staff physician at the Massachusetts General Hospital in Boston.

Hyperglycemia, or high blood glucose, caused by problems with insulin pump equipment, was the most frequently reported adverse event in the bionic pancreas group. The number of mild hypoglycemia events, or low blood glucose, was low and was not different between the groups. The frequency of severe hypoglycemia was not statistically different between the standard of care and bionic pancreas groups.

Four companion papers were also published in Diabetes Technology and Therapeutics, two of which provided more detailed results among the adult and youth participants. The third paper reported results from an extension study in which the participants from the standard-of-care control group switched to using the bionic pancreas for 13 weeks and experienced improvements in glucose control similar to the bionic pancreas group in the randomized trial. In the fourth paper, results showed that using the bionic pancreas with a faster-acting insulin in 114 adult participants improved glucose control as effectively as using the device with standard insulin. “NIDDK’s decades-long investment in developing advanced technologies for diabetes management has reached another promising milestone and continues to provide significant return,” said NIDDK Director Dr. Griffin P. Rodgers. “While we continue to search for a cure for type 1 diabetes, devices like the bionic pancreas can allow people to worry less about their blood-glucose levels and focus more on living their fullest, healthiest lives.”

Dr. Edward Damiano, project principal investigator, professor of biomedical engineering at Boston University, and founder and executive chair of Beta Bionics, Inc., concurs. “The completion of this study represents a major milestone for the bionic pancreas initiative, which simply would not have been possible had it not been for the support provided by the NIDDK over the years.”

The study is one of several pivotal trials funded by NIDDK to advance artificial pancreas technology and look at factors including safety, efficacy, user-friendliness, physical and emotional health of participants, and cost. To date, these trials have provided the important safety and efficacy data needed for regulatory review and licensure to make the technology commercially available. The Jaeb Center for Health Research in Tampa, Florida, served as coordinating center.

A large epidemiological study shows that patients with an autoimmune disorder have a substantially higher risk of developing cardiovascular disease than individuals without autoimmune disease.