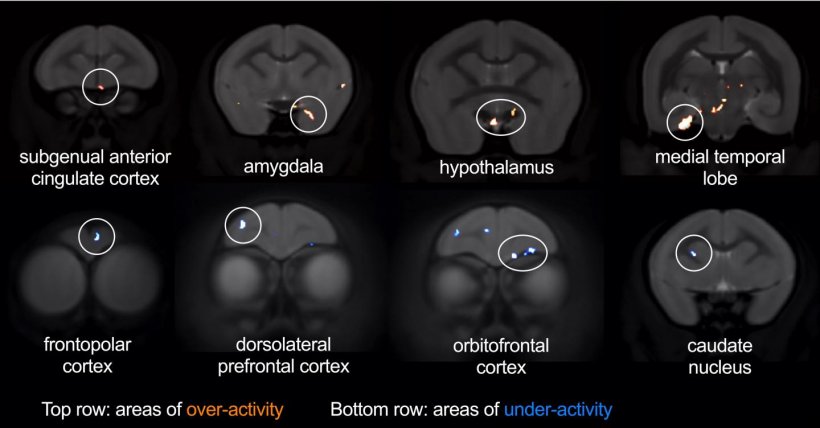 The researchers used brain imaging to explore other brain regions affected by sgACC over-activity during threat. Over-activation of sgACC increased activity within the amygdala and hypothalamus, two key parts of the brain's stress network. By contrast, it reduced activity in parts of the lateral prefrontal cortex - a region important in regulating emotional responses and shown to be underactive in depression.

Depression is a debilitating disorder affecting hundreds of millions of people worldwide, but people experience it differently. Some mainly have symptoms of elevated negative emotion like guilt and anxiety; some have a loss of ability to experience pleasure (called anhedonia); and others a mix of the two.

Research at the University of Cambridge has found that increased activity in sgACC - a key part of the emotional brain- could underlie increased negative emotion, reduced pleasure and a higher risk of heart disease in depressed and anxious people. More revealing still is the discovery that these symptoms differ in their sensitivity to treatment with an antidepressant, despite being caused by the same change in brain activity.

Using marmosets, a type of non-human primate, the team of researchers infused tiny concentrations of an excitatory drug into sgACC to over-activate it. Marmosets are used because their brains share important similarities with those of humans and it is possible to manipulate brain regions to understand causal effects.

The researchers found that sgACC over-activity increases heart rate, elevates cortisol levels and exaggerates animals' responsiveness to threat, mirroring the stress-related symptoms of depression and anxiety. "We found that over-activity in sgACC promotes the body's 'fight-or-flight' rather than 'rest-and-digest' response, by activating the cardiovascular system and elevating threat responses," said Dr Laith Alexander, one of the study's first authors from the University of Cambridge's Department of Physiology, Development and Neuroscience. "This builds on our earlier work showing that over-activity also reduces anticipation and motivation for rewards, mirroring the loss of ability to experience pleasure seen in depression."

To explore threat and anxiety processing, the researchers trained marmosets to associate a tone with the presence of a rubber snake, an imminent threat which marmosets find innately stressful. Once marmosets learnt this, the researchers 'extinguished' the association by presenting the tone without the snake. They wanted to measure how quickly the marmosets could dampen down and 'regulate' their fear response. "By over-activating sgACC, marmosets stayed fearful for longer as measured by both their behaviour and blood pressure, showing that in stressful situations their emotion regulation was disrupted," said Alexander.

Similarly, when the marmosets were confronted with a more uncertain threat in the form of an unfamiliar human, they appeared more anxious following over-activation of sgACC. "The marmosets were much more wary of an unfamiliar person following over-activation of this key brain region - keeping their distance and displaying vigilance behaviours," said Dr Christian Wood, one of the lead authors of the study and senior postdoctoral scientist in Cambridge's Department of Physiology, Development and Neuroscience.

The researchers used brain imaging to explore other brain regions affected by sgACC over-activity during threat. Over-activation of sgACC increased activity within the amygdala and hypothalamus, two key parts of the brain's stress network. By contrast, it reduced activity in parts of the lateral prefrontal cortex - a region important in regulating emotional responses and shown to be underactive in depression. "The brain regions we identified as being affected during threat processing differed from those we've previously shown are affected during reward processing," said Professor Angela Roberts in the University of Cambridge's Department of Physiology, Development and Neuroscience, who led the study. "This is key, because the distinct brain networks might explain the differential sensitivity of threat-related and reward-related symptoms to treatment."

The researchers have previously shown that ketamine - which has rapidly acting antidepressant properties - can ameliorate anhedonia-like symptoms. But they found that it could not improve the elevated anxiety-like responses the marmosets displayed towards the human intruder following sgACC over-activation. "We have definitive evidence for the differential sensitivity of different symptom clusters to treatment - on the one hand, anhedonia-like behaviour was reversed by ketamine; on the other, anxiety-like behaviours were not," Professor Roberts explained. "Our research shows that the sgACC may sit at the head and the heart of the matter when it comes to symptoms and treatment of depression and anxiety."