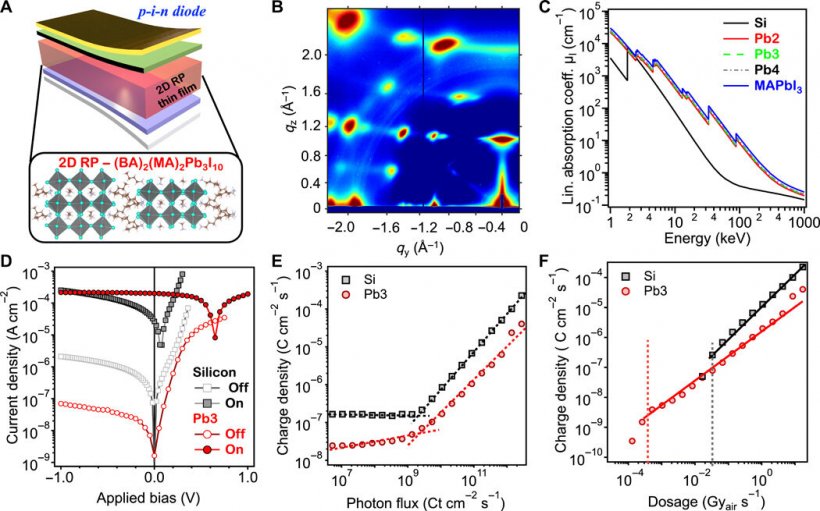 Solid state radiation detectors can directly convert X-ray signals (radiation photons) into electrical current or charges, with superior sensitivity and a high count rate. The devices can outperform other detection techniques in use to meet critical needs in medical and security applications and in Advanced Photon Source facilities. In order to determine the device detectivity or sensitivity and resolve above the dark noise in a high-performance X-ray detector, scientists must minimize the dark current amplitude at reverse bias and resolve the current generated at low X-ray dosage.

The process requires high purity semiconductors and fully depleted junctions across active regions, while semiconducting materials used for detection also need be robust. Researchers presently use high-purity semiconducting single crystals operating under high voltages across active regions to meet these requirements. Such detectors, however, need a high operational voltage across a large thickness (~ 1 cm), which cause technical challenges such as charge drifting or high fabrication costs to maintain large volumes of monocrystals in scalable imaging applications.

A new type of thin-film device

In this work, Tsai et al. designed a new type of thin-film device made in p-i-n junction configuration (three differently doped regions sandwiched between the p- and n- doped region) using 2-D perovskite to efficiently detect X-ray photons. Using synchrotron grazing incidence … gle X-ray scattering (GIWAXS) measurements, the team confirmed superior crystallinity and the preferred orientation in the 2-D thin film. To test the feasibility of perovskite as a radiation detector, they calculated the linear X-ray absorption coefficient (µ1) as a function of incident energy for three different materials, where the values for the perovskite materials were 10- to 40-fold higher than that of silicon. The team explored the strong X-ray absorption observed at perovskite materials, to achieve charge transport and collection across two electrodes. The dark current density for the 2-D RP (Ruddlesden-Popper) device indicated a high dark resistivity of 1012 Ohm.cm as a result of the pin junction and the efficient dark current blocking layers in its constitution. When they exposed the devices to an X-ray source, the team observed a giant increase in X-ray induced current density (Jx) at zero bias (short circuit). Similarly, the 2-D device features also contributed to a larger open-circuit voltage of 650 mV under X-ray exposure at short circuit, compared to a silicon diode (~250 mV).

To understand the performance of the superior detector, Tsai et al. examined the power- and field- dependent J-V (current density) characteristics of the device in depth. When they plotted the J-V curves under various X-ray photon fluxes, the device signals decreased with diminishing photon flux. Further observations suggested near-ideal charge collection efficiency under X-ray exposure due to thin-film pin junction design. The results showed the efficiency of the thin-film detector even at low dosage exposure. The high open-circuit voltage (VOC = 650 mV) generated in the device due to the high carrier density further indicated its use as an alternative detection parameter, when VOC scaled linearly with the photon flux during experiments.

The team subsequently measured the X-ray luminescence spectra of the perovskite thin film by probing its visible emission signal under X-ray excitation. The ionized charge recombination pathway helped gain deeper insight into the operational mechanism of the detector. Based on the observations, Tsai et al. noted that when high-energy X-ray excited the material, the charges avalanched and ionized at much higher energy. The charges then transported through states of high and low energy for their eventual collection, yielding an electrical signal. The processes allowed high X-ray induced electrical current signal and high VOC generation without thermal loss to demonstrate the outstanding performance in X-ray detection in the study.

Another advantage of the thin-film 2-D device architecture included a large built-in field, which facilitated the fast extraction of X-ray carriers. The team stabilized the performance of the device for 30 cycles of voltage scans and X-ray exposures and showed stability of the thin film under both bias and X-ray exposure. In this way, Hsinhan Tsai and colleagues developed a high-quality layered perovskite thin film to engineer a promising candidate to detect radiation. The thin-film device design allowed high sensitivity with an improved detection limit. The device operated with low external bias for stable detection of both low-energy X-ray and ions, with potential applications broadly in medicine and space science.

Canon Medical Systems Corporation has entered into an agreement to acquire Nordisk Røntgen Teknik, with the acquisition being completed following the necessary approval procedures. 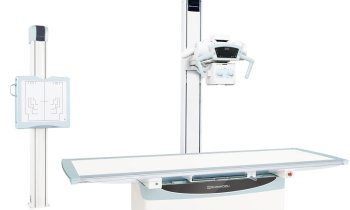