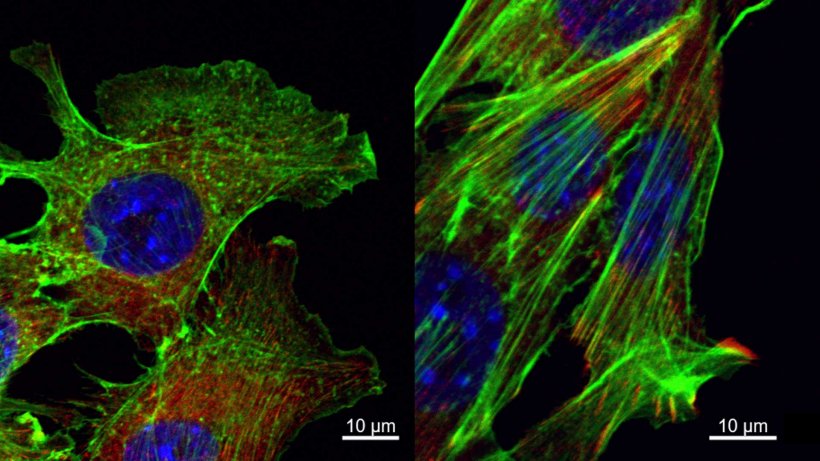 Certain regulatory RNAs are involved in cancer cell movement and metastases. On the right, cancer cells are on the move with long, stiff actin filaments (in green) acting like fingers to help it move. Paxillin (red) collects in patches on the cell’s edge, sticking it to a surface. On the left, cells lacking one such regulatory RNA, MaTAR25, are flat. Actin filaments and paxillin are disrupted (speckles instead of filaments or patches), so cells are unable to move efficiently, reducing their ability to escape a tumor and metastasize.

In animal experiments, the researchers could reduce the growth of metastatic tumors with a molecule designed to target that RNA and trigger its destruction. The same strategy, they say, could be used to develop a new breast cancer treatment for patients.

The study, led by CSHL Professor and Director of Research David Spector, was reported in the journal Nature Communications.

In 2016, Spector and colleagues identified dozens of RNA molecules that were more prevalent in breast cancer cells than in noncancerous cells of the same type. All were long, non-coding RNAs (lncRNAs)—RNA molecules that do not encode proteins and are thought to play various regulatory roles inside cells. The current study investigated how one of these, Mammary Tumor-Associated RNA 25 (MaTAR 25), impacted breast cancer cells’ behavior in mice.

Experiments by Kung-Chi Chang, a graduate student in Spector’s lab, indicate the molecule contributes to cancer’s progression in several ways—revving up cells’ growth as well as their ability to migrate and invade tissue. These effects may be due to changes in the activity of the tensin1 gene, which the team found is one of MaTAR 25’s targets. Tensin1 helps connect a cell’s internal cytoskeleton to the external matrix that surrounds it and is therefore positioned to influence a cell’s movement as well as its growth-regulating pathways.

To eliminate MaTAR 25, the researchers designed a small piece of nucleic acid that recognizes and binds to its sequence. Once bound, that molecule, known as an antisense oligonucleotide, alerts an enzyme inside cells to destroy the lncRNA. When the researchers injected this molecule into the bloodstream of mice, it reached tumor cells and degraded most of the MaTAR 25, with dramatic effects. Spector said: “When we did histology on the tumors, we found that they were very necrotic, meaning there was a lot of cell death after this RNA was degraded. And obviously, that’s an important finding, but equally, if not more important, we found a very significant reduction in metastasis to the lungs. So this, you know, really gave us some very exciting data that this RNA molecule has some potential as a therapeutic target.”

Spector’s team found that high levels of an analogous RNA called LINC01271 are associated with more aggressive disease in patient breast tumors. They are now investigating whether an antisense oligonucleotide that targets LINC01271 can interfere with tumor growth and metastases in patient-derived breast cancer models.

The risk of early breast cancer spreading to another part of the body ranges from 6% to 22%, according to the first results of a large and detailed global study of metastatic breast cancer presented…

Mapping the 'family tree' of cancer

When cancer is confined to one spot in the body, doctors can often treat it with surgery or other therapies. Much of the mortality associated with cancer, however, is due to its tendency to…

A team at Purdue University has developed a novel testing platform to evaluate how breast cancer cells respond to the recurrent stretching that occurs in the lungs during breathing. The technology is…