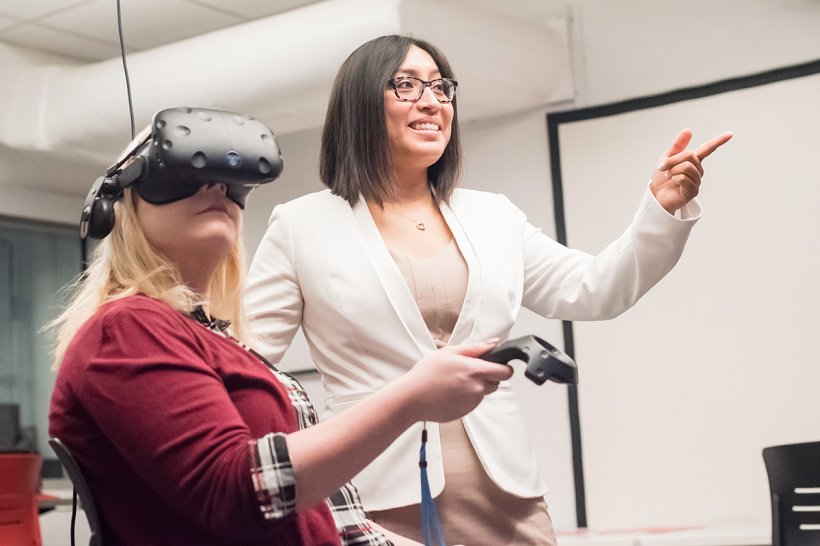 Visual media designer Drew Fast of the Center for Innovation in Teaching and Learning uses a virtual reality headset with the help of social work professor Rosalba Hernandez. Fast and Hernandez co-wrote a study that explored hemodialysis patients using a virtual reality program on mindfulness/meditation to alleviate the physical side effects and monotony of their treatments.

Patients in the study wore a head-mounted virtual reality display to participate in a 25-minute mindfulness/meditation intervention called Joviality, a fully immersive experience that transported them to settings away from the clinic. “While virtual reality has been found to be beneficial in pain management and physical rehabilitation, its potential for helping dialysis patients contend with the physical side effects and tedium of their treatment sessions has been largely unexplored,” said University of Illinois Urbana-Champaign social work professor Rosalba Hernandez, the lead author of the study published in the journal Kidney360.

However, virtual reality also can induce nausea and lightheadedness – known as “cybersickness” – so it was important to determine if it would be a safe platform for delivering content that could enhance hemodialysis patients’ treatment experience without exacerbating such symptoms, Hernandez said. Patients are transported to a virtual living room environment, where they feel as if they are seated in an armchair following the visual and auditory cues from a flat-screen TV. Patients use head movements such as nodding to navigate the virtual environment because their ability to move their hands and arms is limited during treatments. The patients watch a video on the virtual TV in which Hernandez explains the principles of mindful awareness and how patients can apply them in their everyday lives to improve their emotional well-being. After the mindfulness lesson, viewers are transported to a peaceful garden setting for a 12-minute guided meditation.

The team adapted the positive psychology concepts from a module on mindfulness that is part of an intervention called Developing Affective Health to Improve Adherence, an online wellness program for patients with diabetes. In a prior study, Hernandez’s team found that dialysis patients who used the five-week DAHLIA positive psychology intervention on tablet computers during their treatment sessions alleviated their feelings of depression and boredom.

Patients in the current study, who ranged in age from 34-84, had been undergoing hemodialysis for 3 1/2 years, on average. They used the meditation/mindfulness program twice, beginning 30 minutes after treatment commenced or during the final hour. Patients’ feelings of cybersickness and other motion-related symptoms such as fatigue and disorientation greatly improved after using the virtual reality equipment, according to scores on questionnaires they completed before and after the sessions. However, Hernandez cautioned against drawing causal inferences since the study did not include a control group, and patients’ improved symptoms could have been caused by other factors such as social contact with the center’s staff.

A randomized trial would be the next step to corroborate the benefits found in the current study, she said. “The exact mechanism by which virtual reality improves symptoms is not understood, although researchers suggest two plausible mechanisms,” Hernandez said. “Either the high-definition graphics and interaction with virtual objects diverts patients’ attention, lessening their symptoms, or virtual reality reduces brain activity in regions that govern pain responses.”

Article • A new kind of therapy

For many years, Virtual Reality (VR) has been part of the gaming sector with eye goggles for players to interact with certain scenarios. However, more recently VR has shown it can deliver specific treatments in healthcare. It is already being applied, for example, to treat phobias and as a distraction therapy for pain.

Patients reported that the mindfulness/meditation intervention was fun, easy to use and provided a relaxing, calming atmosphere that actively distracted them from the clinic setting and promoted a sense of being present in the virtual environment instead. The virtual reality trial was also well received by staff members at the treatment center, who reported that it neither interfered with their duties nor socially isolated the end users.

Although the pilot study was small, with just 20 participants from one clinic, Hernandez said the results are promising and that the potential therapeutic uses and benefits of virtual reality for hemodialysis patients can be explored in larger trials that examine its effects on quality of life, dietary adherence, longevity and morbidity. The majority (80%) of the study’s participants were men, whose average age was 55. Participants self-reported a high prevalence of comorbid diseases – 85% reported having hypertension and 50% said they had diabetes. “Our group currently is designing a 3D grocery store shopping trip for hemodialysis patients that helps them identify the healthiest types of food they can purchase and consume,” Hernandez said.

An autoimmune side effect of immune checkpoint inhibitor (ICI) drugs could signal improved control of kidney cancer, according to a new study by researchers in UT Southwestern's Kidney Cancer Program…

Focal treatment of prostate cancer involves treating only the tumor and not the entire gland, sparing surrounding tissue and nerves. The method is being evaluated in a research study.