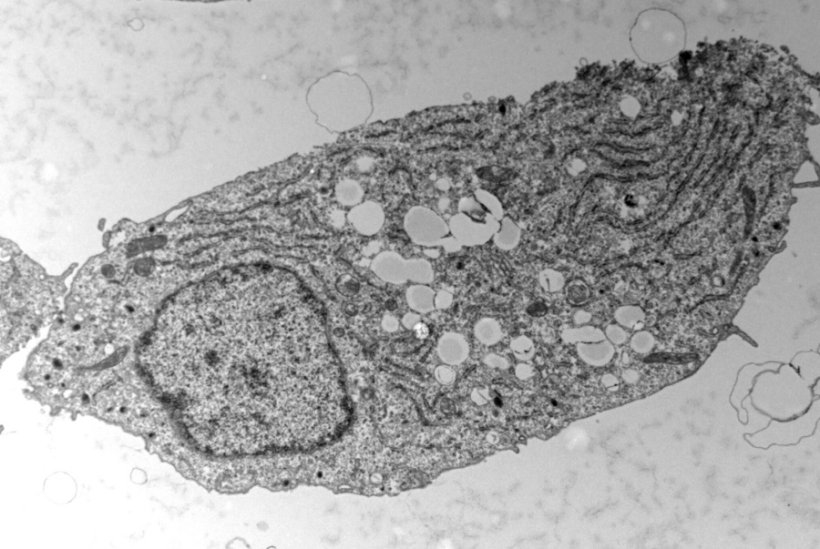 Pancreatic beta cell under electronic microscopy. The white circles visible in the centre of the cell correspond to fat storage droplets.

With nearly 10% of the world's population affected, type 2 diabetes is a major public health issue. An excessively sedentary lifestyle and excessively caloric diet encourage the development of this metabolic disease by altering the functioning of pancreatic cells and making blood sugar regulation less effective. However, fat, which is often cited as the ideal culprit, could be rehabilitated. Indeed, fat does not necessarily aggravate the disease and could even play a protective role.

By studying insulin-producing pancreatic beta cells, scientists from UNIGE) have shown that these cells suffered less from excess sugar when they had previously been exposed to fat. By investigating the cellular mechanisms at work, the researchers discovered how a cycle of fat storage and mobilization allows cells to adapt to excess sugar. These results, published in the journal Diabetologia, highlight an unexpected biological mechanism that could be used as a lever to delay the onset of type 2 diabetes.

Type 2 diabetes results from a dysfunction of pancreatic beta cells, which are responsible for insulin secretion. This impairs the regulation of blood sugar levels and can lead to serious heart, eye and kidney complications. In the 1970s, fat was singled out and the concept of lipotoxicity emerged: Exposure of beta cells to fat would cause their deterioration. More recently, excess sugar has also been blamed for damaging beta cells and promoting the development of type 2 diabetes. However, while the culpability of sugar is no longer in doubt, the role of fat in beta cell dysfunction remains ambiguous. What are the cellular mechanisms involved?

"To answer this key question, we studied how human and murine beta cells adapt to an excess of sugar and/or fat," explains Pierre Maechler, a Professor in the Department of Cell Physiology and Metabolism and in the Diabetes Centre of the UNIGE Faculty of Medicine, who led this work.

The number of gamified mobile applications is rising rapidly—especially in healthcare. Gamified apps or devices are used in many fields, from mental health therapy to stroke rehab to managing metabolic conditions. This article illustrates how gamification is employed in diabetes care.

The essential use of fat

In order to differentiate the effect of fat from that of sugar, the scientists exposed beta cells to an excess of sugar, of fat, and then to a combination of the two. The toxicity of sugar was first confirmed: Beta cells exposed to high sugar levels secreted much less insulin than normal. "When cells are exposed to both too much sugar and too much fat, they store the fat in the form of droplets in anticipation of less prosperous times," explains Lucie Oberhauser, a researcher in the Department of Cell Physiology and Metabolism at the UNIGE Faculty of Medicine, and first author of this work. "Surprisingly, we have shown that this stock of fat, instead of worsening the situation, allows insulin secretion to be restored to near-normal levels. The adaptation of beta cells to certain fats would thus contribute to maintain normal blood sugar levels."

By further analyzing the cellular changes at stake, the research team realized that fat droplets were not static reserves, but were the site of a dynamic cycle of storage and mobilization. And thanks to these released fat molecules, beta cells adapt to the excess sugar and maintain a near-normal insulin secretion. "This release of fat is not really a problem as long as the body uses it as a source of energy," adds Pierre Maechler. "To avoid developing diabetes, it is important to give this beneficial cycle a chance to be active, for example by maintaining regular physical activity."Scientists are now trying to determine the mechanism by which this released fat stimulates insulin secretion, in the hope of discovering a way to delay the onset of diabetes.

A device using next-gen technology to automatically deliver insulin was found to be more effective at maintaining blood glucose levels than standard-of-care management for type 1 diabetes.

News • Early clues in the panceas

A team from Geneva has discovered a molecule that can identify the development of diabetes before the first symptoms appear.