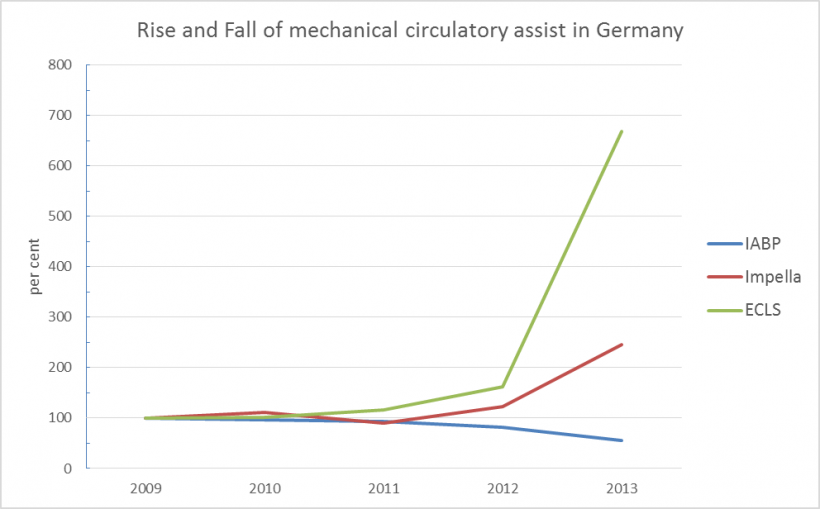 Development of the use of circulatory assist devices in Germany. In 2009, 10,205 percutaneously implanted IABPs were recorded (2009 was chosen as the base year because the first patients for the IABP shock II trial were recruited in that year). In 2013, the year following the publication of the results, the figure had fallen to 5,712. In the same period the number of Impella implantations had risen from 153 to 372, and of ECLS (without purely perioperative use) from 273 to 2,268.
own illustration, based on data provided by Statistisches Bundesamt (Destatis) and personal conversations.

A small study at the small University of Halle (Saale), Germany, triggered the most significant business kill of the current decade. Confirmed by a multi-centre study, the IABP Shock II trial, it prompted the worldwide revision of guidelines: the recommendation regarding the use of intra-aortic counter-pulsation (IABP – intra-aortic balloon pump) was downgraded from a Class I ‘strong’ recommendation to a simple recommendation (see European Hospital, 4/2013 p. 20-21 and EH 4/2014 p. 14-15). Why: There was no difference in 30-day and one-year mortality between patients who had received IABP in addition to conventional therapy after infarction-induced cardiogenic shock and those who had not received IABP (30d, 40% vs. 41%; 1a, 52% vs. 51%). Consequently, in Germany, the number of implantations decreased by almost one third (see figure).

Meanwhile, the sister clinical discipline cardiac surgery, where in the early 2000s significantly more IABPs had been implanted, made renewed efforts to assess the oldest and most easily implantable mechanical circulatory assist device and published a specific S3 guideline on the use of intra-aortic counter-pulsation in cardiac surgery (S3 Leitliniezum Einsatz der intraaortalen Ballongegenpulsation in der Herzchirurgie.

These guidelines clearly recommend the following:

Evidence is equally weak regarding the recommendation on the point in time of implantation: early if HLM weaning of the patient is difficult or impossible.

Very strong evidence (IA) - and strong recommendation – for the operation of IABP: Pre-surgery implanted IABP is recommended for use during the actual cardiac surgery, to transform non-pulsatile flow of the HLM to pulsatile flow.

Dr Kevin Pilarczyk, cardiac surgeon and coordinator of the guideline, which was drafted in cooperation with the national professional organisations for cardiology, intensive and trauma medicine and extra corporeal techologies, sums up the recent data: ‘The results of the IABP shock II trial, with patients who almost exclusively had received interventional treatment, cannot readily be applied to cardiac surgery patients.

‘A patient in infarct-induced cardiogenic shock who has to undergo balloon dilatation or stent implantation in the cardiac cath lab cannot be compared to a comparatively stable non-infarction patient who has an increased perioperative risk profile due to reduced pump function. Surgery involving general anaesthesia, heart-lung machine and temporary cardiac arrest differs fundamentally from cardiac therapy.’

Such pathophysiological considerations are supported by a recent meta analysis assessing several randomised studies on preoperative IABP in high-risk cardiac surgery patients: it showed that aortic counter-pulsation is associated with reduced hospital mortality and reduced length of stay – even when limited to more recent studies. Data regarding the continuation of IABP-induced pulsatility during HLM are equally reliable [Source: Int J Artif Organs. 2009;32:50-61]. In contrast, IABP in high-risk patients before stent implantation does not seem to have any benefits [DOI: 10.1016/j.ijcard.2012.12.027]. Dr Pilarczyk concludes: ‘While there are no dedicated studies for this particular setting, we recommend considering IABP implantation in infarction-induced cardiogenic shock with surgical revascularisation due to the differences to cardiology.’

It remains to be seen to what extent these data will lead to an increase in implantations. Today, cardiologists are familiar with other, more difficult to implant systems – with remarkable results: attacked as business killers two years ago, they have now turned into business boosters. All other relevant systems – Impella, TandemHeart and ECLS – are significantly more expensive than IABP. The reimbursement a hospital receives for ECLS is at least ten times the amount reimbursed for IABP.

The implantation figures of all other systems totalled and projected into the future indicate that these other systems will overtake IABP in 2017 – despite the fact that, to date, no randomised study has demonstrated an advantage over – shown to be useless – IABP.

Profile:
Following medical studies in Giessen, Essen and Houston, Kevin Pilarczyk MD became a researcher at the Mayo Clinic Rochester. He is now senior resident at Westdeutsches Herzzentrum, the West German heart centre in Essen, Germany. His clinical and research focus is cardio-surgical intensive care, particularly extracorporeal cardiac and pulmonary support systems. He is secretary and coordinator of the interdisciplinary S3 guideline for the use of intra-aortic balloon counter-pulsation in heart.

Why is fried food bad for the heart?

Fried-food intake is linked to a heightened risk of major heart disease and stroke, finds a pooled analysis of the available research data, published online in the journal Heart. And the risk rises…

One step closer to regenerative heart valves and stents

Non-degradable prostheses for cardiovascular tissues can be used to replace heart valves and blood vessels, but they can’t stay in the body permanently. In two recent papers, researchers at the…

Patients with acute heart failure nearly double their risk of dying if they get Covid-19, according to new research. The small, single centre study highlights the need for patients with heart failure…