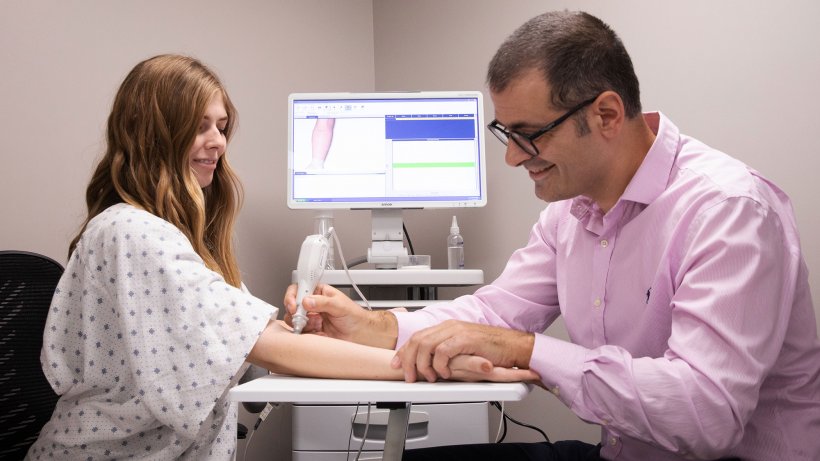 Natasha Andreasen, left, and Benjamin Sanchez-Terrones demonstrate the new diagnostic tool they are developing to detect breast cancer in a patient

While the risk of getting breast cancer is higher for older people, it can strike at any age. Studies show that 5% to 7% of females with breast cancer are under 40 years old. To widen the age group of those who can get tested, University of Utah electrical and computer engineering assistant professor Benjamin Sanchez-Terrones is developing a safe, painless diagnostic tool for detecting breast cancer that uses a low electrical current instead of radiation. His research was recently published in the journal IEEE Access.

The research is based on the notion that cancer causes a person’s lymphatic interstitial fluid to change due to the increased presence of white blood cells and other physiological changes that happen to fight off the tumor. “We suspect that the immune response is triggered in a person with cancer and produces lymphatic interstitial fluid that is less electrically conductive,” says Sanchez-Terrones, who is also a member of the Experimental Therapeutics program at the Huntsman Cancer Institute in Salt Lake City, Utah. To detect that change, Sanchez-Terrones along with Utah-based IONIQ Sciences, which develops cancer-screening technologies, are creating a diagnostic device with two electrodes that send a low-voltage electrical current through the body to detect these lymphatic changes. 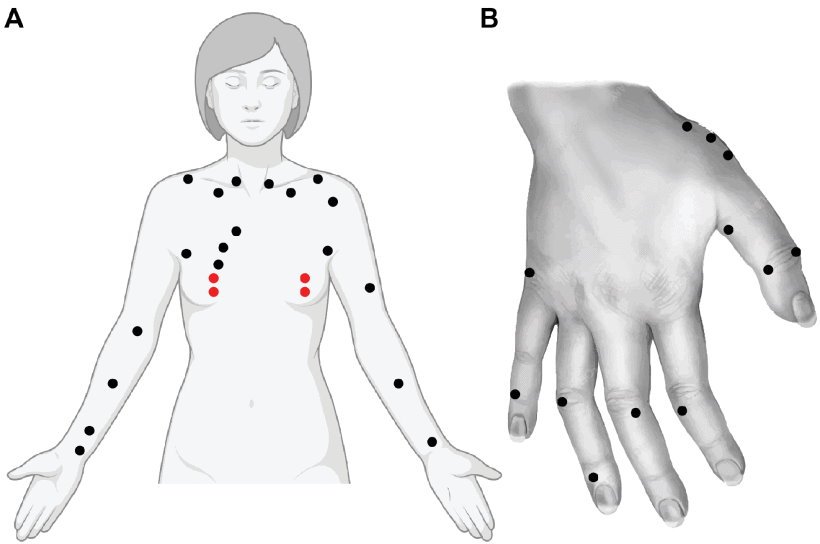 The patient holds one electrode while the doctor touches different parts of the body with a handheld probe containing the second electrode. Each time the second electrode touches the skin, a painless electrical current runs from that electrode to the one the patient is holding. The doctor may do this as many as 40 times, and the whole procedure takes less than 30 minutes. Measurements of the person’s conductivity are taken with each touch, and an algorithm in the device analyzes the data points and calculates a likelihood the patient has cancer or not. An early clinical study conducted on 48 women, 24 with malignant breast cancer and 23 with benign lesions, showed the procedure was 70% effective at predicting whether a patient has cancer and 75% effective at determining if a person did not have cancer, Sanchez-Terrones says.

Because this method uses low-voltage electricity instead of radiation like a mammogram, Sanchez-Terrones says it can be used repeatedly on women of any age. It therefore is designed to be used in conjunction with a mammogram to provide an even more accurate overall diagnosis. “The likelihood of success at fighting the cancer depends on when you act on it. If you can detect it and treat a person sooner, your chances of survival are higher,” he says.

The procedure also could be used on breast cancer patients currently undergoing treatment to determine if their therapy is working. Cancer patients can only get a mammogram six months to a year after radiation treatment ends, according to the American Cancer Society. But with this new diagnostic tool, more tests can be conducted without the risk of exposing the patient to more radiation from a mammogram. “They do one mammogram measurement before, one six months later, and one maybe a year later. That’s three times you are measured, and that’s it,” Sanchez-Terrones says. “But what about in-between? When there is no radiation from a mammogram involved, you can use this to find out how the patient is doing and perhaps change the therapy if necessary.”

This process of using electrical current to detect cancer is already being used by IONIQ Sciences to predict the presence of lung cancer. Sanchez-Terrones has also published a paper in November in JID Innovations about using the method to detect skin cancer so a doctor does not have to rely on just a visual examination of the patient. Sanchez-Terrones and IONIQ Sciences have so far received a Breakthrough Therapy Designation for the breast cancer device from the Federal Drug Administration and will apply for full FDA approval.

AB-MRI could be the ideal screening tool

MRI is increasingly relevant to cancer management, especially to detect breast carcinoma. Professor Christiane K Kuhl from the department of diagnostic and interventional radiology at the University…