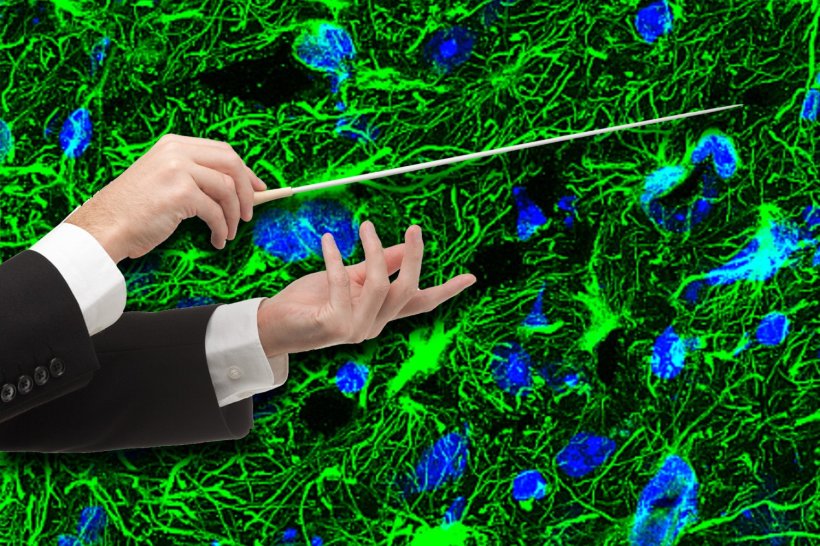 From now on, they set the pace of activity signals for the entire tumour cell network. With serious consequences: The activity pattern activates two central molecular mechanisms in the tumor cells that drive the growth of the glioblastoma and increase its resistance. In addition, the team led by Professor Dr. Frank Winkler in the Clinical Cooperation Unit Neurooncology at UKHD and DKFZ identified the ion channel that gives tumour cells their pacemaker capabilities. This could provide a starting point for future therapies: In animal experiments, targeted inhibition slowed tumour growth and led to the death of parts of the tumour network.

The researchers have published their findings in the journal „Nature“.

The pacemaker cells transmit at a specific frequency, and that is apparently the activation code for exactly these two signaling pathways. In a sense, we have thus cracked the code of tumour communication

Similar to cells in the healthy brain, the tumour cells of glioblastomas form extensive networks and thus infiltrate large parts of the brain. Due to these branching networks, they cannot be completely removed by surgery and survive intensive chemotherapy and radiotherapy. An important component of this organizational structure is the exchange of information between the tumour cells and input from neuronal activity. The research work of David Hausmann, a medical graduate student in Winkler's lab and first author of the article, focused on the internal communication of tumour cells: "We wanted to know what information the tumour cells pass on to each other - mainly via calcium signals - and how this is encoded - we wanted to understand the language of the tumour."

In specifically developed tumour models with human glioblastoma cells, e.g. in the form of mini-tumours in the culture dish as well as in brains of living mice, the researchers discovered a hierarchical organizational structure in addition to a basically existing "equal" mode of communication: individual cells of the network develop into pacemakers that dictate their periodic rhythmic activity to the others. In this context, the basic network structure of glioblastoma resembles that of the worldwide web in terms of communication efficiency: the pacemaker cells act as network nodes, i.e. they are particularly well connected with other tumour cells. They are equipped with specific ion channels - a prerequisite for rhythmic activity. "The tumour rhythm functions similarly to the heart rhythm. In fact, this ion channel, the calcium-dependent potassium channel KCa3.1, is also found in the pacemaker regions of the heart. But there it is only one among many," Hausmann explains.

Here's how it works: Electrically charged potassium ions flow in through the channel, which changes the surface tension of the cell - whether it's a heart cell, a neuron, or a tumour cell - and activates it. The activation signal is then transmitted to the network. What leads to muscle contraction and heartbeat in the heart results in the activation of two specific molecular mechanisms (MAPK and NF-κB) in glioblastomas, the researchers found. These are linked to the aggressive growth and resistance of glioblastomas. "The pacemaker cells transmit at a specific frequency, and that is apparently the activation code for exactly these two signaling pathways. In a sense, we have thus cracked the code of tumour communication," says senior author Prof. Winkler.

The research group showed that only a few percent of glioblastoma cells develop into pacemakers. When individual ones are targeted and turned off, the cells connected to them also die. "With the pacemakers, we have clearly discovered an Achilles' heel of glioblastomas," says Professor Dr. Wolfgang Wick, Medical Director of the Neurological Clinic at the UKHD and Head of Clinical Cooperation Unit Neurooncology. "If we can effectively block the KCa3.1 channel and thus turn off the pacemakers, this could permanently weaken the tumours and deprive them of the survival advantages of their network." A suitable drug candidate already exists, and initial tests in mice have been promising. However, clinical trials have yet to show whether it is suitable for therapy in humans.

All cancer tumors have one thing in common – they must feed themselves to grow and spread, a difficult feat since they are usually in a tumor microenvironment with limited nutrients and oxygen. A…