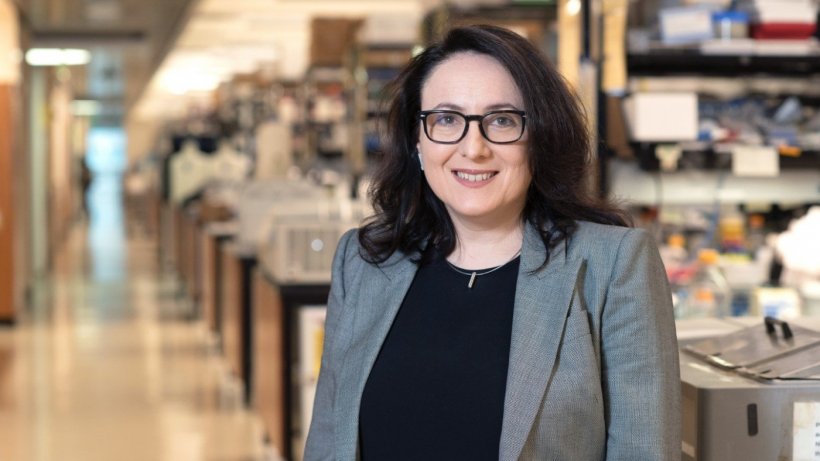 An important part of the brain's immune system, cells called microglia constantly extend and retract "branches" from their cell body to survey their environment. Think of an octopus, not moving its body, but reaching its tentacles in every direction. That's how microglia operate. In the span of an hour, each cell will have covered the entire three-dimensional space that surrounds it. And then, it will start all over again.

This continuous and rapid surveillance is a unique feature reserved for microglial cells in the brain. It occurs in your brain all the time, without the presence of disease, and whether you are awake or asleep. Microglia can also rapidly direct their branches toward a site of injury in the brain. The longstanding theory has been that microglia perform this surveillance to sense invasion by an infectious agent or to sense trauma.

"This never made sense to me," says Katerina Akassoglou, Ph.D., a senior investigator at Gladstone Institutes. "Why would a cell expend so much energy for something that might never happen? I always thought there must be another reason for microglia to be moving all the time, likely related to a normal function in the brain."

As it turns out, Akassoglou was right. In a recent study published in the journal Nature Neuroscience, she and her team show that, in fact, surveillance by microglia helps prevent seizure activity (or hyperexcitability) in the brain. These findings could open new therapeutic avenues for several diseases, given that hyperexcitability is a feature of many neurological disorders, including Alzheimer's disease, epilepsy, and autism.

Akassoglou has been interested in the brain's innate immune system since the beginning of her scientific career. She first witnessed microglial surveillance under the microscope during her postdoctoral fellowship in 2003, in a neighboring lab that discovered the phenomenon. Right away, she knew that to understand these cells, she had to find a way to "freeze" their movement.

"That was easier said than done—it took over 10 years to figure out how to stop them from moving," says Akassoglou, who is also a professor of neurology at UC San Francisco (UCSF). "There are ways to kill the cells, but then they are gone and you can't study their movement. It was very challenging to find a way to keep them alive while also preventing them from being able to survey the brain."

She and her team created the first mouse model in which the process of microglial brain surveillance can be blocked. The cells are still alive, but they can no longer extend and retract their branches. Then, the goal of the project was simply to observe what happens.

"It was purely driven by curiosity," Akassoglou says. "We just wanted to know, why do these cells move all the time, and what happens to the brain if they stop?"

"Microglia seem to sense which neuron is about to become overly active, and keep it in check by making contact with it, which prevents that neuron's activity from escalating."

Initially, nothing seemed to happen and the "frozen" microglia appeared normal. Until one day, Victoria Rafalski unexpectedly observed a mouse having a seizure. "That's when we realized that with microglia not functioning properly, mice were having spontaneous seizures," says Rafalski, Ph.D., a first author of the study and former postdoctoral scholar in Akassoglou's lab at Gladstone. "It was our first indication that surveillance by these cells might suppress seizure activity. It also gave us a hint as to why they needed to move constantly—suppressing seizures may be a nonstop necessity in the brain."

To investigate further, the researchers relied on the latest technological advances in microscopy and image analysis. They combined these approaches to develop their own method to observe the interaction between microglia and active neurons in a live brain, as mice ran on a wheel while their whiskers were tickled.

The scientists discovered that microglia are not extending their branches at random. Instead, microglia reach out primarily to active neurons, one after another, while paying less attention to non-active neurons. Importantly, they noticed that when microglia touch an active neuron, that neuron's activity does not increase further.

"Microglia seem to sense which neuron is about to become overly active, and keep it in check by making contact with it, which prevents that neuron's activity from escalating," explains the study's other first author, Mario Merlini, former staff research scientist in Akassoglou's lab, who now leads a team at the University of Caen Normandie in France. "In contrast, in our mouse model where microglia movements are frozen, we found that the activity of nearby neurons keeps increasing, a bit like a heater with a broken thermostat. This changed our thinking on how neuronal activity is regulated in the brain. Instead of an on-off switch, microglia are the brain's thermostat, controlling excessive neuronal activity".

"We now have a model to study the consequences of impaired microglia surveillance on brain inflammation and cognition in diseases including Alzheimer's disease, multiple sclerosis, and also brain infection by viruses, like COVID-19."

These findings helped the team discover a physiological role for microglial surveillance; microglia are essential for maintaining neuronal activity within a normal range by preventing neurons from becoming overactive, or hyperexcitable.

"Network hyperexcitability can be observed in patients with epilepsy and in other conditions in which epilepsy is more likely to occur, such as Alzheimer's disease and autism," says Jorge Palop, Ph.D., a co-author of the study and associate investigator at Gladstone. "And, a hyperactive brain causes a large number of neurons to fire (or become active) at the same time—a process known as hypersynchrony that can lead to spontaneous seizures. Our study could offer a new way to intervene in diseases with hyperexcitability."

"In many brain diseases, the ability of microglia to survey the brain is impaired," says Akassoglou. "We now have a model to study the consequences of impaired microglia surveillance on brain inflammation and cognition in diseases including Alzheimer's disease, multiple sclerosis, and also brain infection by viruses, like COVID-19."

Knowing that microglia constantly move to keep the brain from becoming hyperexcitable could have therapeutic implications. In fact, hyperactivity in the brain could be reversed by using pharmacologic activators to force microglia to extend their branches. In the study, this approach restored the microglial processes when whiskers were tickled and brought neuronal activity back to normal levels. Akassoglou and her team are now expanding these studies to test any possible beneficial effects in models of disease.

"By unlocking the enigma of microglia's constant movement, we now have new clues for treating devastating brain diseases," says Akassoglou.