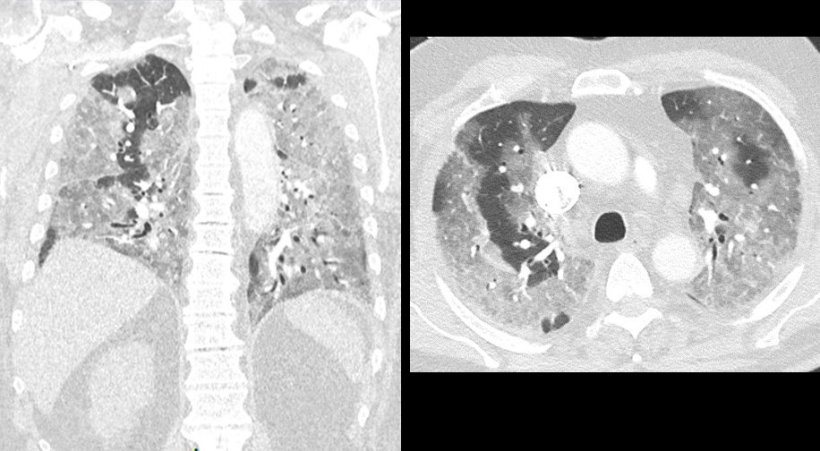 The severity score is based on the presence and extent of ground-glass opacities (GGO), consolidation opacities, or both, seen on the CT images of lung lobes. Each lung lobe extent is classified with a numeric score as mild, moderate, or severe, ranging from 0 (not present in any lung lobe) to 20 (> 75% in all five lung lobes). The number of lung lobes involved per patient by GGO or consolidation opacities is also estimated as a first visual CT score to assess the extent of the damage.

A score of 7 or higher is the threshold indicating greater risk of death within 30 days from Covid-19, independent of other commonly accepted risk factors, including patient age, respiratory rate, oxygen saturation levels, comorbidities, and hs-troponin I level at admission. The score also helps predict discharge rates among inpatients.

The study to develop the severity score

Principal investigator Professor Elie Mousseaux, MD, PhD, and colleagues developed the score by assessing the initial chest CT exam of 210 consecutive patients hospitalised for at least 24 hours who were not directly admitted to an ICU between March 13 and April 8, 2020. CT images of all patients were assessed by pairs of radiologists working independently who were blinded from all clinical data, biology, and initial chest CT analysis. In cases of differing assessments, a cardiothoracic imaging specialist would provide a consensus reading used for the final analysis of the relationship between the visual lung CT scores, 30-day mortality, and other outcomes.

The researchers analysed rates of all-cause mortality at 30 days according to the number of affected lung lobes by either GGO, consolidation, or both, and according to the visual lung damage CT score. All of the patients were initially admitted to Covid-19 wards, but 72 patients were transferred to an ICU during their hospital stay. As of May 8, 2020, when follow-up ended, 147 had been discharged, 15 remained hospitalised, and 48 died.

The total CT severity score combining GGO and consolidation was a mean of 6.3 in survivors and 9.5 in non-survivors. The 30-day mortality increased threefold if the visual lung damage CT score was 7 or greater. The more frequent and significant features in non-survivor patients were dyspnoea (shortness of breath), higher respiratory rate, and lower oxygen saturation. The researchers reported that there also was a significant increase in creatinine levels, in cardiac biomarkers and in inflammation biomarkers in non-survivors compared to survivors. Additionally, the presence of pleural effusion and of peripheral distribution of lesions was more frequent in non-survivors.

Patients with a CT severity score of 7 or higher were also twice as likely to be transferred to an ICU during hospitalisation. Survivors with high scores also had longer hospital stays.

After infection with SARS-CoV-2, where does the immune system store the memory to provide long-term protection against reinfection? Though numerous studies have examined blood to track immune responses to SARS-CoV-2, a new study of Covid survivors shows that the memory of the infection is primarily stored in T and B cells within the lung and the lymph nodes surrounding the lung.

‘The scoring system has helped the hospital staff in their decision about admitting a patient whose Covid-19 symptoms might not be considered severe enough for an inpatient stay,‘ Mousseaux explained. ‘If a patient has a CT score greater than 7, we keep that patient in the hospital to be sure their clinical condition will not change during the next few days. In this situation, the CT is essential.’

The researchers explained that ‘to evaluate prognosis, the short-term mortality seems to us as a more objective criterion than a composite endpoint including mortality. Given the magnitude of the epidemic from one location to another, at near-peak the number of patients transferred to intensive care and conversely sent home were more complex to analyse because of the obvious lack of available space in many institutions, particularly regarding ICUs. ‘We have confirmed here that the proportion of patients discharged was lower and that transfers to the ICUs were greater when the lung severity CT score on admission was 7 or greater,’ they added.

Elie Mousseaux, MD, PhD, heads the cardiothoracic imaging division in the radiology department at Assistance Publique Hôpitaux des Hôpitaux de Paris (AP-HP) of the Hôpital Européen Georges-Pompidou in Paris. He is a professor of radiology at the Faculté de Médecine Paris Descartes of the University of Paris. Dr. Mousseaux leads a research team at INSERM U970 in the Cardiovascular Research Center (PARCC), focusing on rare and/or hereditary cardiovascular diseases, and development of post-processing of cardiovascular biomarkers in CT and MRI.

A promising new application for photon-counting CT: The new technology outperforms conventional CT in detecting subtle damage in the lungs of patients with persistent symptoms of Covid-19.

Using functional MRI with inhaled xenon gas, researchers have identified that long COVID symptoms are related to microscopic abnormalities that affect how oxygen is exchanged from the lungs to the…