In his opening speech Dr David H Hussey, president of the RSNA, indicated that he hopes for closer co-operation between the doctors involved in diagnosis and therapy. ‘If diagnostic radiology and radio-oncology co-operated more, this could only be for the benefit of cancer patients,’ he emphasised. This is why, he said, he would be pleased if more radio-oncologists played an active role in the RSNA. Over 700 companies presented their latest products at this year’s event in Chicago.

The co-operation between Agfa and Siemens is already successful. The Agfa exhibition stand - still adorned with the Siemens logo – displayed Mammomat Novation. The co-operation between the two companies envisages that Agfa will offer their customers the digital mammography system manufactured by Siemens and that in return, Siemens will include Agfa’s range of digital storage systems in their portfolio. However, emphasis at Agfa was on its Impax Enterprise, which includes Impax RIS (radiology information system) and the new release 6.0 of Impax PACS as important parts of the electronic patient file.

Aycan, well known in Germany as a pioneer of the DICOM concept, introduced the Xerox Dokucolor 240 - the new flagship product for the printing of X-ray images on paper. The DC 240 prints bones and soft tissue in colour or black and white on DIN A3 or DIN A4 paper.

Barco, manufacturer of display solutions, presented colour monitors with three million pixels. These new, high-resolution colour displays are calibrated with the DICOM-Grayscale. The radiologist can use the same monitor to make a diagnosis viewing images of the lungs, or to view 3-D reconstructions of the heart in colour. Barco’s 3-D image display and analysis software, Voxar, impresses with its sheer range of functions - leading to its demonstration at numerous other exhibition stands as well.

Eizo was another manufacturer presenting 3 Megapixel displays. All display manufacturers have one thing in common - they do not simply offer the hardware (the panels) but also useful software features. Eizo’s LEA (Lifetime Expectancy Analyzer), for instance, can predict the lifetime of the screen’s sensitive backlighting.

Fujifilm was the first company to introduce digital storage systems in radiography. The Japanese company introduced two new readers in Chicago, the Capsula and Clearview systems. The innovative company, with its European headquarters in Dusseldorf, has also had a lot of success with its Synapse PACS system over the last few months.

It would be almost impossible to name all the highlights produced by General Electric. Their dominance in the American market was obvious from their huge exhibition stand. GE’s new range of products for digital radiography is called Definium - which ranges from mobile systems to fully-fitted X-ray rooms. The LightSpeed series is now complemented by a BrightSpeed range with a 4-, 8- and 16-slicer. GE is now offering its flagship product - the volume scanner VCT - in combination with a PET (positron emission tomography).
The three large manufacturers, Philips, Siemens and General Electric, see molecular imaging combined with personalised medicine as one of the most important growth segments. In the future, molecular imaging will enable all oncology patients to receive fully personalised therapy. In their technology pavilion, GE demonstrated to RSNA visitors how they envisage the care cycle will look in 10-15 years.

The German-Pavilion: For the last five years the RSNA has been part of the international trade fair programme run by the German Federal Government. This means that the Federal Ministry of Economics and Technology (BMWi) as well as the Federal Ministry of Food, Agriculture and Consumer Protection (BMVEL) make quite substantial subsidies available to smaller companies that hope to exhibit abroad. Among the firms exhibiting in the German Pavilion were IT specialists Medavis, Medos and Visus, as well as the contrast media manufacturers Medtron and Ulrich.

Whilst  Medavis as a radiology information systems (RIS) manufacturer, and Visus, as a PACS manufacturer, co-operate in Germany, Medos can supply department management systems as well as digital imaging archives. In May 2005, Medos was taken over by the Swedish Ortivius group, a company that offers, amongst other products, complete solutions for primary control units, ambulances and telematic systems for the transmission of patient and vital data from an ambulance directly to electronic patient files used by the hospital information system (HIS).

Visus entered into a large contract with the Diagnostic-Network AG, a teleradiology service provider from Dillingen/Saar, which already provides CT and MRI image analysis to 50 German clinics, day and night.

Medtron and Ulrich manufacture innovative contrast media injection concepts for medical imaging.
Hitachi used to attract a lot of attention (in the early 1990s) as the supplier of basic technology for Philips Tomoscan computed tomographs (CT), but then they apparently retreated from the European market. However, the firm has returned to Germany with a new product range of computer and magnetic resonance tomographs.

Although Kodak offers a complete product range for digital radiography, the company is a long way from the days where the name Kodak stood for innovation in radiological imaging. Holding a Kodak X-ray, mammography or dry laser film used to be like looking at holiday snaps. However, the new digital, complete product range DR 3000, DR 7500, CR 850 and CR 950 seems to lack that certain something which would make it stand out from the competition. The same fate befell Konica-Minolta. Their strategists reacted too late to new trends. Admittedly, digital radiography has only really achieved a notable turnover in the last three or four years, but the trust that a customer requires in a company would have been built up long before that. However, Konica-Minolta is now also back, with two digital storage systems and a digital mammography scanner.

Compared with Barco, Eizo, Planar and Totoku, NEC Displaysolutions is one of the newer players in the medical imaging manufacturers market. Their range of grayscale and colour monitors is adequate, by all means, but there are no particular highlights. However, Planar can offer just that. Their 30-inch display with four  Megapixels, framed by high sheen, black casing, clearly stands out. The landscape format is large enough to display two mages side by side. With this product, the unsightly dividing line that occurs when images are displayed across two monitors has become history. A dream to look at, but at around €10,000.– not cheap!

Philips hit the headlines last year when they acquired the American companies Epic and Stentor. Epic produces hospital information systems. Stentor (digital imaging archive, PACS) is a long-standing winner of the KLAS report, an American classification system for PACS systems. The integration of all imaging systems into the IT infrastructure is part of the vision of this Dutch company. The test-runs of the German versions of Xtenity (Epic-KIS) and iSite (Stentor-PACS) are due to start in 2007/2008. Despite the fact that it has been marketed for about a year, the magnetic resonance tomograph Panorama 1.0 Tesla manufactured by Philips is still a particular magnet for visitors at the RSNA.

Sectra has released its PACS Release 10.2, which has been adapted to the new requirements of multislice CTs. Computer tomograms with a full resolution of 64 slices produce several thousand cross-sectional images during examination. The ‘Smart Caching’ function of Version 10.2 is aimed in particular at working with large sets of data. Moreover, as of now, Sectra offers a new 3-D application as well as an integrated cardiology solution. The Swedish company’s ‘Microdose Mammography’ system is a digital mammography machine of the highest quality.

The only real surprise for most visitors at the exhibition came from Siemens. For the first time, the Dual Source CT, a computed tomograph with two tubes and detector systems was introduced to the international public. The German premiere happened just prior to this, at Medica 2005. The system is likely to significantly improve quality in coronary imaging. In the field of magnetic resonance imaging, the Erlangen-based  company is banking on their two workhorses Magnetom Espree, a 1.5 Tesla System with a gantry opening of 70cm and a gantry length of only 125cm and the Magnetom Trio. The 3 Tesla machine is now also equipped with TIM (Total Imaging Matrix) technology for whole body examinations. Siemens’ combination of the PET scanner and the computed tomograph Sensation 64 is of particular interest, as it facilitates non-invasive imaging of coronary vessels and perfusion studies all in one examination.

Swissray is a Swiss X-ray system manufacturer with considerable success in the US and Eastern Europe. It now offers flat detectors based on silicon technology for its radiography systems. The company uses the tried and tested detectors produced by Trixell, which Siemens and Philips are also using in their systems. The new technology, along with innovative product design, should enable the Swiss company to penetrate the Germany market as well.

Last but not least, Toshiba. The Japanese have a complete range of X-ray systems, modalities and ultrasound scanners. A regular cycle of innovation ensures up-to-date technology. Be it digital X-ray systems, 64-slice CT or open MR, Toshiba has it all.

All in all, visitors at RSNA 2005 had the impression that the motto of the congress was evolution rather than revolution. All manufacturers have developed their modalities, as well as their IT systems, to an extremely high, technical level over the last few years. The keyword DICOM (Digital Imaging and Communication in Medicine), up until recently a synonym for data connectivity, is hardly mentioned these days. Exchange of data within radiology and interdisciplinary across different areas of medicine is now the reality. So, we can get on with the business of making diagnoses in peace.
*Editor: www.radiologieforum.de

At RSNA 2009 GE Healthcare is presenting a big basket filled with trends and innovations for the radiology department:

Biomarkers - the hallmark of personalised medicine

"One size fits all" – the phrase is a fact of life in terms of the drugs available to treat cancer patients today. This solution can bear tragic results. Only 25% of cancer patients currently…

An improved view with 64 slices

Late in 2009, GE Healthcare’s 64 slice PET/CT Discovery 690 began its use in the University Clinic for Nuclear Medicine in Innsbruck, Austria. Apart from routine clinical examinations for treatment… 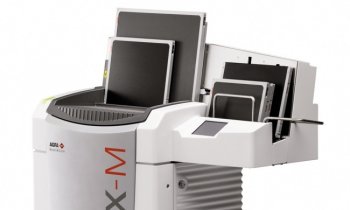