In the future, it could help prevent complications in the healing of endoprostheses. The coating also offers further advantages: It is extremely wear-resistant and yet at the same time so rough that bone cells adhere well to it. The study was published recently in the journal "Scientific Reports" of the Nature Publishing Group. 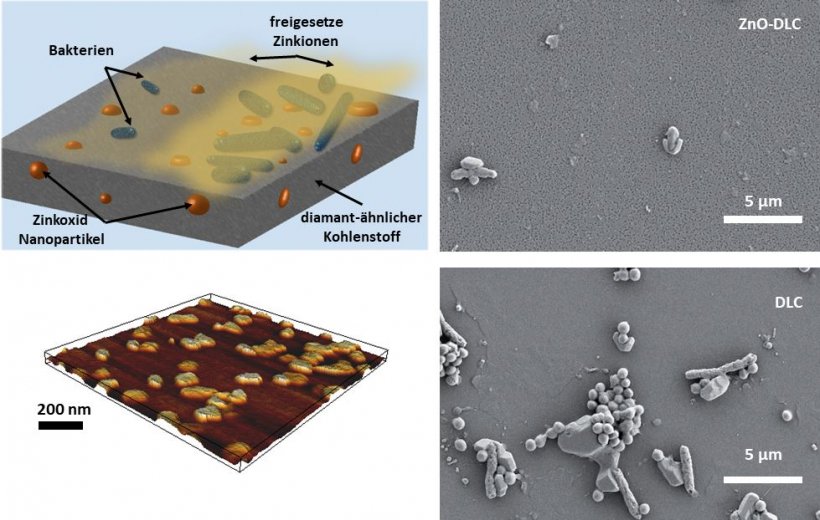 Intelligent coating: Nanoparticles of zinc oxide are embedded in a wafer-thin coating of diamond-like carbon (DLC) (top). The bacteria shown are not to scale, but in reality are about 20 times larger. When the zinc oxide particles dissolve, tiny depressions remain on the surface (below, here shown as a negative - the depressions appear as mountains). Bone cells can adhere well to them. DLC without zinc oxide (bottom right) is much more easily colonised by bacteria than DLC with metal particles (top right). Both images were taken at a pH value that normally prevails in infections.

Today, the implantation of artificial hip or knee joints is part of everyday surgical practice. One problem that doctors have to contend with is infections near the prosthesis. They delay healing and can permanently impair the stability of the connection between the endoprosthesis and the bone. In addition, they increase the risk of surgery for the patient. "The situation is further complicated by the fact that more and more bacteria are becoming resistant to common antibiotics," explains Dr Christoph Westerhausen from the Department of Experimental Physics I at the University of Augsburg. "This forces us to look for alternatives.”

One such alternative could be the innovative coating that the research team from Augsburg, Hamburg and Munich has now developed and tested. This is a wafer-thin coating made of diamond-like carbon, which experts call "DLC". DLC coatings are extremely resistant; they have therefore been used for many years whenever wear and abrasion must be minimised. But the key feature of the new coating lies elsewhere: "We dope it specifically with zinc oxide particles," emphasises Westerhausen. "Zinc ions are toxic to microorganisms; the dissolution of zinc oxide is also strongly dependent on the pH value of the solution.”

Unfortunately, though, the heavy metal has a significant disadvantage: it can also damage or even kill body cells - an effect that is, of course, undesirable for the healing of the implant. However, as long as the zinc oxide is embedded in the DLC layer, there is no danger. Only when the nanoparticles dissolve in the tissue fluid and the zinc thus becomes a freely mobile ion does it unfold its toxic potential. This happens particularly quickly in acidic environments (an effect, incidentally, that was used in the manufacture of the zinc-carbon batteries that were previously widely used). "And it was precisely this phenomenon that led us to the design of our DLC coatings," says Westerhausen.

When the wound becomes acidic

Infections are often accompanied by a reduction in the pH value - the wound "becomes acidic". The scientists' idea was that perhaps this would lead to the carbon coating releasing its zinc content, primarily in the presence of bacteria - i. e. when it is actually necessary. "That was why we initially produced tiny zinc oxide particles," explains the biophysicist. "Each of them was not even one twentieth as thick as a bacterium.” Then the researchers stirred this "heavy metal dust" into a liquid polymer solution and used it to wet their test implants. They then converted the thin polymer film into DLC using a sophisticated process.

They tested the resulting coating for its behaviour at different pH values. Normally, the tissue fluid is neutral to minimally alkaline; in case of inflammation, however, it becomes slightly acidic. In fact, the zinc oxide dissolved much faster under these conditions. The coating released about thirty percent more zinc ions in the initial phase of the release when the pH was lowered by one level (which corresponds approximately to the typical value for an infection). In an even more acidic environment, the increase was as much as 130 percent. In microbial tests, the researchers were also able to show that the coating can effectively inhibit the growth of bacteria - especially at an acid pH value. Among the microbes tested were also those that are resistant to various antibiotics and that therefore frequently cause problems after operations.

Admittedly, tissue cells were also damaged by the zinc ions. "However, the effect also occurs with an acid pH, i. e. with an infection," stresses Dr Westerhausen. "In such a situation, however, the advantage - namely killing bacteria - far outweighs the disadvantage of tissue damage. In further tests, the scientists now want to vary different parameters of the new coating, such as the amount of zinc ions added. They hope to be able to further optimise the effect. "We already see great potential in our DLC coatings to significantly reduce complications during the healing of endoprostheses,” says Westerhausen.

The main goal of arthroplasty is to relieve pain, improve and restore joint function and recover quality of life. Periprosthetic joint infection remains a complication that has to be taken seriously.