"Antibiotic resistance in the European Union is estimated to result in 25,000 deaths per annum and costs 1.5 billion euros in healthcare costs and productivity losses. Yet, more worrying is the emergence of bacteria with plasmid-borne resistance against colistin - an antibiotic of last resort. For Gram-positive bacteria the variety of resistance genes is limited and molecular diagnostics can provide useful information about treatment of a patient shortly after a blood culture bottle flags as positive.

The situation for Gram-negative bacteria is more complicated as there are a large number of resistance genes, many of which can be transmitted between different bacterial species. The CDC has listed carbapenem-resistant Enterobacteriaceae (CRE) as an urgent threat in antimicrobial resistance and a number of companies manufacture molecular diagnostic kits which can identify the five major types of resistance in a few hours. Those kits are useful for routine screening, but for epidemiology or infection control a highly multiplexed molecular diagnostic kit is required that encompasses a large number of minor as well as major CRE genes. It is likely that the highly multiplexed kits will become the norm for screening applications, as well giving hospitals immediate access to infection control issues.

Ideally, diagnostic tests should advise the clinician of the best clinical strategy rather than just informing about the content of individual sequences of resistance gene found in the sample. This requires a more complex strategy where the spectrum of resistance genes that would preclude use of a particular antimicrobial agent are tested. If all genes that might give resistance to that class of antibiotic are missing, then treatment with that drug is recommended. 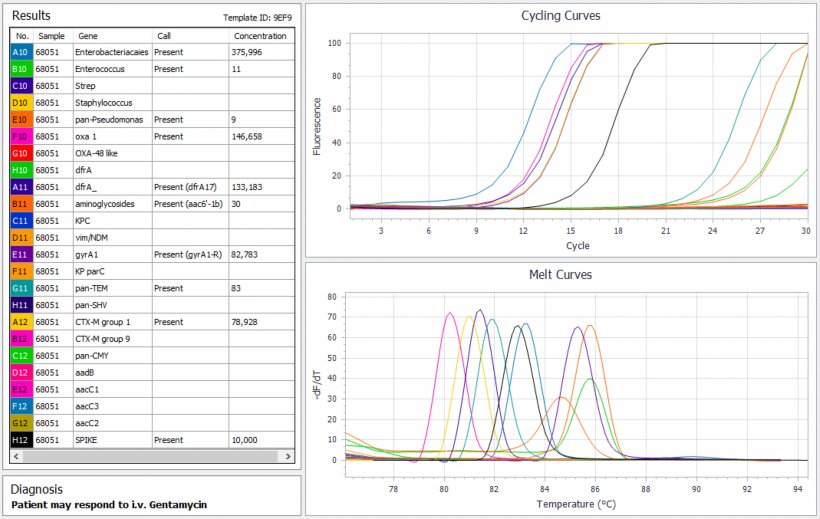 A highly multiplexed assay for bacterial ID and resistance genes can be used to predict a possible treatment based on knowledge of the epidemiology of infections. Note the ‘Diagnosis’ at the bottom left hand side of the results screen.

Because the number of resistance genes is large a probability consideration based on epidemiology has to be included so that a clinical course can be recommended with a certain probability of success. This type of analysis requires a highly multiplexed PCR system which can detect multiple sequences from a single sample (see figure). This approach was recently carried out for difficult to treat urinary tract infections and might be the forerunner of similar tests for other conditions. Improved antibiotic stewardship could be well served if the microbiologist can advise the best antibiotic to use, thus preventing over prescription of last resort antibiotics in critical hospital settings. The issue is whether a result can be obtained fast enough to be of value, and what probability of success would be acceptable to the clinician. In this context, the ability to detect the presence of bacteria and resistance gene in EDTA blood before culture is an important step forward.

Microbial resistance is also becoming of major importance in sexually transmitted infections. Mycoplasma genitalium is not easy to culture, so nucleic acid testing is the only feasible route for diagnosis of resistance. Unfortunately, macrolide resistance has become widespread and is very common in some patient groups. A particular concern is Neisseria gonorrhoeae, which has recently been given ‘superbug’ status having acquired resistance to ceftriaxone, which is the last remaining option for first-line treatment. The rise of resistance in STIs argues for more complex STI diagnostic screening encompassing both infectious agent and resistance genes."

Before his move to Australia, Professor Keith Stanley was an academic at the University of Cambridge and the European Molecular Biology Laboratory. After he invented Multiplex Tandem PCR, which enables quantitative analysis of large multiplexes, he launched the molecular diagnostics company AusDiagnostics, which works closely with customers to develop novel diagnostic solutions.

Antibiotic resistance: a global problem in urgent need of solutions

Antibiotics have been at the heart of modern healthcare since the 1950s. They are prescribed prior to an operation to minimise the risk of infection after the operation. Or antibiotics are prescribed…

The European Society of Clinical Microbiology and Infectious Disease (ESCMID) – an organization that explores risks, knowledge sharing and best practices in the fight against infectious disease –…

Periprosthetic joint infection (PJI) can be an enormous challenge for orthopaedists and trauma surgeons. Antibiotic-loaded bone cement is an important element in a prevention strategy.