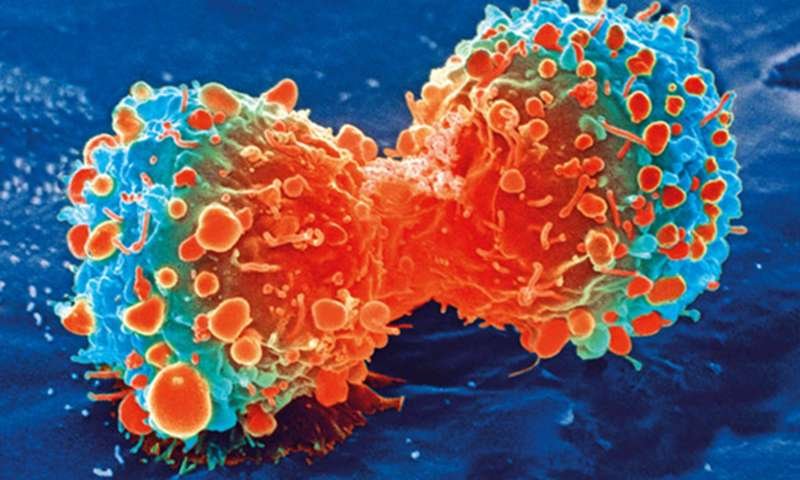 Cancers with the same genetic weaknesses respond differently to targeted drugs depending on the tumour type of the patient, new research reveals.

Scientists at The Institute of Cancer Research, London, found that cancer cells from a range of tumour types with the same genetic changes sent out different molecular signals when treated with precision medicines—and that this affected how the cells reacted to the treatment. Many cancers share genetic weaknesses that can be attacked using the same targeted treatments, but doctors have noticed before that these drugs weren't always equally effective in people with different tumour types. The new study of cells from lung, bowel and pancreatic cancers demonstrates that there are stark biological differences in the way that cancer cells from different tumour types respond to gene-targeted drugs.

The researchers looked at 30 different cancer cell types in the lab from bowel, lung and pancreatic tumours, measuring changes in 'on and off switch' molecules in cells linked to seven well-known cancer genes. They found that drugs that blocked the common cancer gene PI3K, including an experimental drug discovered at the ICR called pictilisib, had varying effects in different cancer types. One of the ways PI3K works is to flip the off switch on a related protein, AKT, to stop tumour growth—but in this study, bowel cancer cells were less likely than lung cancer cells to switch off AKT in response to pictilisib.

We found that cells from different cancers responded quite differently to drugs targeting the same genetic fault.

The researchers believe these kinds of 'dynamic' cell signals—which vary depending on the tissue background—could explain why targeted drugs can work differently in people whose tumours have the same genetic faults. Looking at the response to pictilisib in more detail, the researchers analysed the drug's effect in cells taken from 10 patients treated at The Royal Marsden whose tumours had faults in KRAS—the most frequently mutated gene in cancer. They found that pictilisib triggered an increase in another protein switch, called MEK, in three out of seven samples taken from people with bowel cancer, but in none of the three samples from lung cancer patients.

The study was done in cells in the lab, and larger studies will be needed to uncover the signalling changes in response to targeted drugs in more detail. But the researchers believe the findings will affect the outcome of ongoing clinical trials—and the results are already influencing the design of early-stage trials testing the benefit of new drugs blocking the KRAS gene. In future, the work could also lead researchers to look back at existing treatments that were deemed to have 'failed', and reassess their benefit in different cancer types.

Offering a deeper understanding of cancer's complexity and response to treatment, the research forms part of the ICR's ambitious strategy to overcome evolution and drug resistance in its planned Centre for Cancer Drug Discovery. Professor Udai Banerji, Deputy Director of the Drug Development Unit at The Institute of Cancer Research, London, and The Royal Marsden NHS Foundation Trust, said: "We found that cells from different cancers responded quite differently to drugs targeting the same genetic faults—suggesting that if someone's tumour has a particular genetic fault, we can't automatically assume that a drug targeting that fault will work for them. Our new study suggests that we need to take cancer type into account when designing clinical trials testing the benefit of treatments targeting specific genetic changes—and that we no longer group people participating in clinical trials by the genetic faults in their tumour alone. What's exciting is that we could now look back at targeted drugs that 'failed' before making it into the clinic, to see if any existing treatments could offer benefit to people with other cancers than the tumour types in which they were originally trialled."

Professor Paul Workman, Chief Executive of The Institute of Cancer Research, London, said: "Precision medicine has driven huge advances in cancer treatment over the last two decades, giving some patients months or years of extra life with far fewer side effects than traditional chemotherapy. This new study brings nuance to the paradigm of precision medicine, and shows that the story isn't quite as straightforward as matching a drug to a cancer's genetics. If we can understand better how targeting the same gene can have different effects depending on the tumour type, it can help us to predict more accurately how individual patients will respond to treatment."

Cancer: riding the wave of innovation

In haematology and medical oncology, there is always something new. However, the increasing stratification of cancer therapies presents an enormous challenge for clinical research. Tumour cells –…