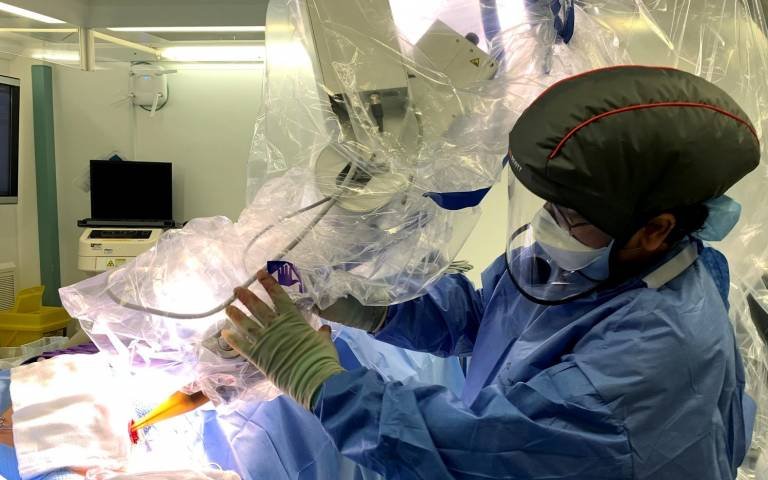 A single dose of targeted radiotherapy during surgery is just as effective as conventional radiotherapy.

The results, published in the British Journal of Cancer, mean that eight out of ten patients who receive the treatment, TARGIT-IORT, will not need a long course of post-operative external beam radiotherapy (EBRT). These results strengthen and expand previously published outcomes.

Patients who received the treatment are less likely to go on to experience fatal cardiovascular disease such as heart attacks, lung problems or other cancers. As well as avoiding scattered radiation from EBRT that can damage nearby vital organs, delivering TARGIT-IORT during the lumpectomy procedure seems to lower the likelihood of death if patients do go on to develop cardiovascular disease, protecting in a drug-like manner. This was the case even when EBRT was also given post-operatively, and is thought to be because the treatment changes the microenvironment in the lumpectomy wound.

The researchers say that delivering radiation immediately to the site where the tumour was can reduce the adverse effects of surgical trauma make the site less conducive for cancer growth and could have an ‘abscopal’ (distant) effect. This is where a treatment such as radiotherapy has a positive effect on tissue away from the operation site, which is increasingly recognised as a beneficial immunological action.

Previous studies have shown that the treatment has fewer radiation-related side effects compared with conventional whole breast radiotherapy, with less pain, a superior cosmetic outcome with fewer changes to the breast as a whole and a better quality of life.

“With TARGIT-IORT, women can have their surgery and radiation treatment for breast cancer at the same time. "

Lead author Professor Jayant Vaidya (UCL Surgery & Interventional Science) said: “With TARGIT-IORT, women can have their surgery and radiation treatment for breast cancer at the same time. This reduces the amount of time spent in hospital and enables women to recover more quickly, meaning they can get back to their lives more quickly.”

TARGIT-IORT is delivered immediately after tumour removal (lumpectomy), and under the same anaesthetic, via a small ball-shaped device placed inside the breast, directly where the cancer had been. The single-dose treatment lasts for around 20-30 minutes and replaces the need for extra hospital visits in eight out of ten cases.

Further tumour subgroup analysis also found that there was a significant overall survival benefit with TARGIT-IORT in patients with grade 1 or 2 cancer.

Professor Vaidya added: “These new results make it clear that the TARGIT-IORT is effective in all tumour subgroups of invasive duct cancer, the most common type of breast cancer. Our new online tool can help clinicians make a decision about additional radiotherapy (recommended in a small proportion of cases) for each individual patient. “The finding that fewer deaths are from the avoidance of scattered radiation and the possible abscopal effect of TARGIT-IORT is important and should fuel further research, opening doors to new treatments.”

MedAustron is becoming a reality in Wiener Neustadt

Currently there is a truly enormous hole in the ground in the city of Wiener Neustadt, Austria, but by summer 2012 MedAustron, one of the most modern centres for ion therapy and research in Europe,…

Artiste is a linear accelerator and CT scanner combined. At the German Cancer Research Centre, a team of scientists led by Professors Wolfgang Schlegel and Uwe Oelfke of the Medical Physics in…