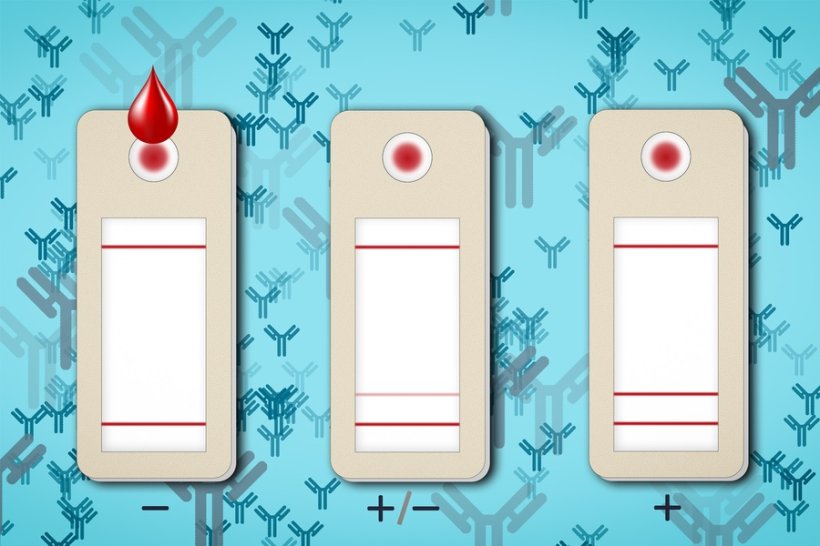 MIT researchers have developed an easy-to-use test that may be able to predict an individual’s immune response to SARS-CoV-2.

Most people in the United States have some degree of immune protection against Covid-19, either from vaccination, infection, or a combination of the two. But, just how much protection does any individual person have?

MIT researchers have now developed an easy-to-use test that may be able to answer that question. Their test, which uses the same type of “lateral flow” technology as most rapid antigen tests for Covid-19, measures the level of neutralizing antibodies that target the SARS-CoV-2 virus in a blood sample.

Easy access to this kind of test could help people determine what kind of precautions they should take against Covid infection, such as getting an additional booster shot, the researchers say. They have filed for a patent on the technology and are now hoping to partner with a diagnostic company that could manufacture the devices and seek FDA approval.

“Among the general population, many people probably want to know how well protected they are,” says Hojun Li, the Charles W. and Jennifer C. Johnson Clinical Investigator at MIT’s Koch Institute for Integrative Cancer Research. “But I think where this test might make the biggest difference is for anybody who is receiving chemotherapy, anybody who’s on immunosuppressive drugs for rheumatologic disorders or autoimmune diseases, and for anybody who’s elderly or doesn't mount good immune responses in general. These are all people who might need to be boosted sooner or receive more doses to achieve adequate protection.”

The test is designed so that different viral spike proteins can be swapped in, allowing it to be modified to detect immunity against any existing or future variant of SARS-CoV-2, the researchers say. 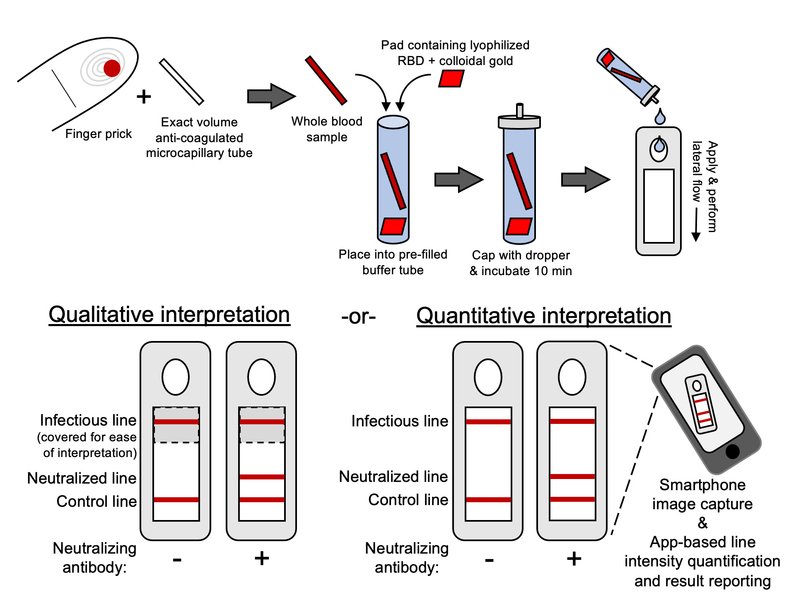 The test uses the same type of lateral flow technology as most rapid antigen tests for Covid-19. It measures the level of neutralizing antibodies that target the SARS-CoV-2 virus in a blood sample. Results can be interpreted qualitatively or quantitatively.

Li studies blood cell development and how blood cells become cancerous. When SARS-CoV-2 emerged, he started thinking about ways to help combat the pandemic. Many other researchers were already working on diagnostic tests for infection, so he turned his attention to developing a test that would reveal how much immune protection someone has against Covid-19.

Currently, the gold standard approach to measuring immunity involves mixing a blood sample with live virus and measuring how many cells in the sample are killed by the virus. That procedure is too hazardous to perform in most labs, so the more commonly used approaches involve noninfectious modified “pseudoviral” particles, or they are based on a test called ELISA (enzyme-linked immunosorbent assay), which can detect antibodies that neutralize a fragment of a viral protein.

However, these approaches still require trained personnel working in a lab with specialized equipment, so they aren’t practical for use in a doctor’s office to get immediate results. Li wanted to come up with something that could be easily used by a health care provider or even by people at home. He drew inspiration from at-home pregnancy tests, which are based on a type of test called a lateral flow assay.

Lateral flow assays generally consist of paper strips embedded with test lines that bind to a particular target molecule if it is present in a sample. This technology is also the basis of most at-home rapid tests for Covid-19.

Li did not have experience working with this type of test, so he reached out to two MIT faculty members with expertise in devising diagnostics based on lateral flow assays: Hadley Sikes, an associate professor of chemical engineering, and Sangeeta Bhatia, the John and Dorothy Wilson Professor of Health Sciences and Technology and of Electrical Engineering and Computer Science, and a member of the Koch Institute.

With their help, his lab developed a device that can detect the presence of antibodies that block the SARS-CoV-2 receptor binding domain (RBD) from binding to ACE2, the human receptor that the virus uses to infect cells.

The first step in the test is to mix human blood samples with viral RBD protein that has been labeled with tiny gold particles that can be visualized when bound to a paper strip. After allowing time for antibodies in the sample to interact with the viral protein, a few drops of the sample are placed on a test strip embedded with two test lines.

One of these lines attracts free viral RBD proteins, while the other attracts any RBD that has been captured by neutralizing antibodies. A strong signal from the second line indicates a high level of neutralizing antibodies in the sample. There is also a control line that detects free gold particles, confirming that the solution flowed across the entire strip.

To develop the reagents needed for the test, members of Li’s lab worked with the labs of Angela Koehler, an associate professor of biological engineering, and Michael Yaffe, a David H. Koch Professor in Science, who are both members of the Koch Institute. 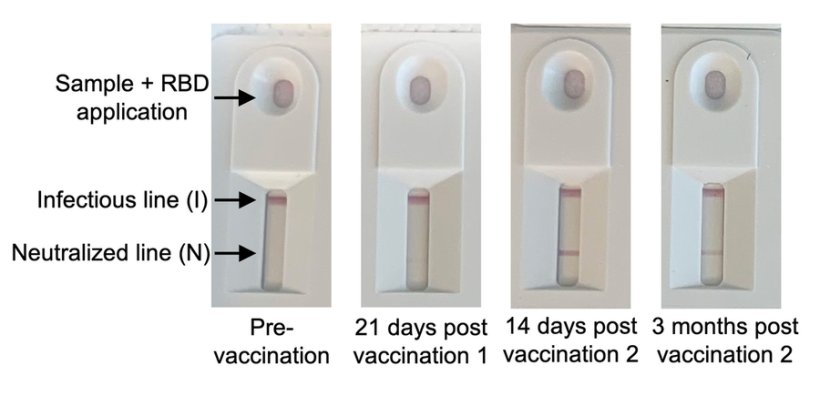 The new test can also reveal how antibody levels rise and fall over time.

Along with a testing cartridge, which contains the paper test strip, the testing kit also includes a finger prick lancet that can be used to obtain a small blood sample, less than 10 microliters. This sample is then mixed with the reagents needed for the test. After about 10 minutes, the sample is exposed to the test cartridge, and the results are revealed in 10 minutes.

The output can be read two different ways: One, by simply looking at the lines, which indicate whether neutralizing antibodies are present or not. Or, the device can be used to obtain a more precise measurement of antibody levels, using a smartphone app that can measure the intensity of each line and calculate the ratio of neutralized RBD protein to infectious RBD protein. When this ratio is low, it might suggest that another booster shot is needed, or that the individual should take extra precautions to prevent infection.

The researchers tested their device with blood samples collected in December 2020 from about 60 people who had been infected with SARS-CoV-2 and 30 people who had not. They were able to detect neutralizing antibodies in the samples from people previously infected to the virus, with accuracy similar to that of existing laboratory tests. They also tested 30 serial samples from two people before they received an mRNA Covid-19 vaccine and at several time points after vaccination. The level of neutralizing antibodies in the vaccinated individuals peaked around seven weeks after the first dose, then began to slowly decline.

Previous studies of SARS-CoV-2 and other viruses have shown a strong correlation between the amount of neutralizing antibody circulating in an individual’s bloodstream and their likelihood of infection.

The test could be easily adapted to different variants of SARS-CoV-2 by swapping in a reagent that is specific to the RBD from the variant of interest, Li says. The researchers now hope to partner with a diagnostics company that could manufacture large quantities of the tests and obtain FDA approval for their use.

The research was published in Cell Report Methods.