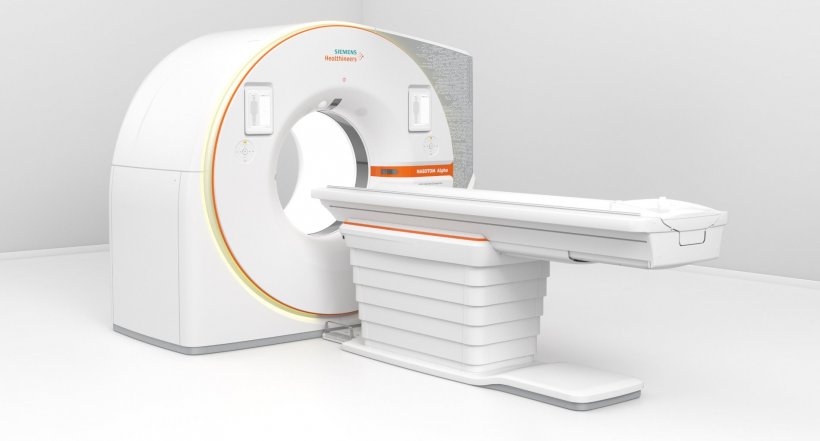 Heralding a new era of computed tomography – that’s the Naeotom Alpha as Siemens Healthineers announced upon the system‘s FDA 510(k) approval. In addition to the US authority the EU has issued the CE marking so the scanner can be launched in these markets. Wolber explains why the new technology is a game changer: “One problem of conventional CT scanners is the fact that the detectors can’t process all the information contained in the x-rays.” The new technology however allows every single x-ray photon to be counted thus yielding enormously increased data volumes. In a nutshell: higher contrast, clearer images and more clinically relevant information.

But how does this work? Put simply, the new technology uses the x-rays more efficiently. The detailed information is contained in the photons of a CT scan. Conventional detectors take a 'detour': they convert the rays into visible light which in turn is translated by a photo sensor into an image. “In this two-step process some of the information is lost”, Wolber explains. The new technology, in contrast, is taking the direct route – a particular semi-conductor converts the photons into electrical signals which can be digitally processed without loss of information. “The data culled in this way is a quantum leap”, according to the expert.

The new detector which enables this quantum leap is equipped with a layer of cadmium telluride single crystal (CdTe). Its production is complex as the crystals have to be grown in a special procedure. Siemens Healthineers gained the necessary knowledge in a partnership with the Japanese company Acrorad which Siemens Healthineers subsequently acquired. “We are very proud of the new CT system,” Wolber emphasizes and adds that “It is the result of more than 15 years of research and development.”

Left: Naeotom Alpha brings the first ever combination of dual source and photon-counting detector: Dual source temporal resolution allows us to scan patients at any heart rate. The addition of the photon-counting detector allows for spectral information and high-resolution. Bringing spectral imaging to the vessels enables us to peek behind the curtain of calcium.
Right: Different scan parameters as well as changes in the patient's habitus are factors which can cause inconsistencies of measurements and potentially influence the evaluation of tumor response during treatment. The standard monoenergetic images provided by Naeotom Alpha in every scan allow radiologists to eliminate sources of imprecision.

For the photon-counting detector to be able to play to its strengths, a new system concept was developed that can handle the new technological requirements. “Compared to current high-end CT scanners the new detector provides about eight to ten times more raw data,” says Wolber. One major challenge was developing a system which can convert this amount of data into images in an acceptable time frame – a task conventional systems simply cannot master. The developers came up with a technology they dubbed 'coupled coax': it transfers the data at a very high speed from the detector in the gantry to the computer that does the image reconstruction. In a next step the processing algorithms were optimized to be able to handle the increased data throughput.

Tumours can be seen much better thanks to the new technology. But also tiny fractures in the musculoskeletal system are now visible or the lungs are shown in much more detail

The potential of the new detector technology is currently being assessed at more than 20 sites throughout Europe. Wolber: “The purpose of these tests is show the actual added value the new CT offers in a hospital setting.” An indeed, so far the feedback from radiologists confirms the value of the innovation, Wolber reports: “Many clinicians are very surprised at the level of additional detail they can see now.” The increased spatial resolution shows anatomy structures that previous CT technology simply could not visualize. “This is for example an advantage in oncology as tumours can be seen much better thanks to the new technology. But also tiny fractures in the musculoskeletal system are now visible or the lungs are shown in much more detail. The new technology does offer real benefits.” This will above all increase diagnostic confidence: the optimised image quality means that the pathology can be assessed more reliably and fewer additional examinations have to be performed.

Lung images of a post-Covid patient with photon-counting CT. Photon-counting technology allows for simultaneous acquisition and visualization of detailed structures (center image) combined with functional information (image on the right). For comparison, an image acquired with conventional CT technology (on the left).

Either high temporal resolution as required in cardiac examinations or spectral image data? The additional computing power in the new CT scanner makes such decisions obsolete as Wolber points out: “Before, radiologists had to compromise. Now they get all data with each scan.”

Another plus: The fact that the analogue step of visible light is no longer necessary increases the so-called HU stability. The intensity of Hounsfield units is captured more reliably which not only enhances image quality but also opens the door for dose-reduced imaging.

As the first CT system to be equipped with such cutting-edge technology, the Naeotom Alpha will be deployed in specialised radiological centres with complex cases. On the long run, however, Wolber can well imagine the photon-counting detector to find its way into general clinical practice – and fully replace conventional CT detectors.

Sponsored • How to deliver more and better care at lower costs

Moving the needle in MRI productivity

In an industry where every second and every click counts, workflow inefficiencies consume as much as a third of the MRI procedure time. This is a key area of focus where technology advances can…