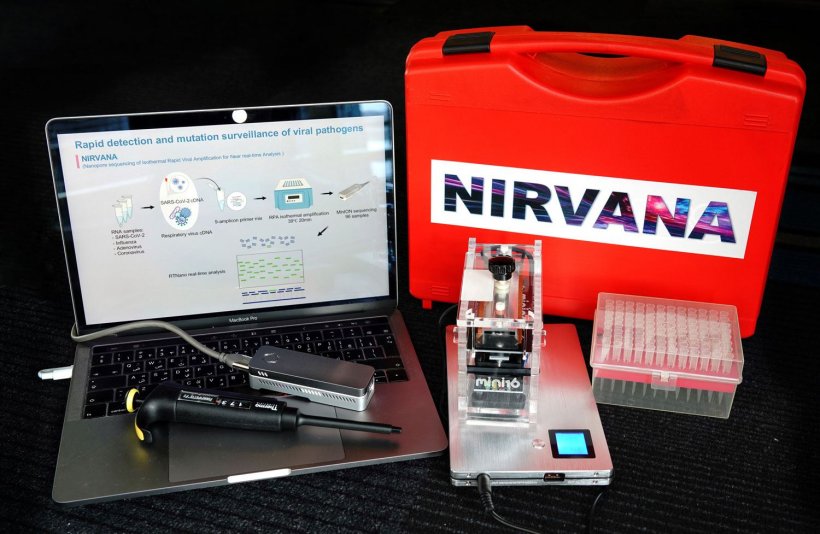 At the same time, they can sequence the virus, providing valuable information on the spread of Covid-19 mutations and variants. The new test, dubbed Nirvana, was described online by a multi-institution team of scientists in the journal Med.

“This is a virus detection and surveillance method that doesn’t require an expensive infrastructure like other approaches,” says Juan Carlos Izpisua Belmonte, co-corresponding author and a professor in Salk’s Gene Expression Laboratory. “We can accomplish with one portable test the same thing that others are using two or three different tests, with different machines, to do.” Around the world, more than 100 million people have been infected with SARS-CoV-2, the virus that causes Covid-19. A staggering 500,000 Americans have died from Covid-19 to date. Testing the population is key to stopping the spread of the virus. In addition, tracking the spread of new SARS-CoV-2 variants—some of which could respond differently to treatments or vaccines—is critical.

Today, the standard approach to determining whether a nasal swab is positive for Covid-19 is to run a polymerase chain reaction (PCR) test to detect genetic material from the SARS-CoV-2 virus. If the sample is negative, however, patients and clinicians don’t get any information on what might be causing the coronavirus-like symptoms—unless they run separate PCR tests, using different swab samples, for other viruses. And if the sample is positive for SARS-CoV-2, they don’t learn which Covid-19 variant a patient is infected with unless another set of tests is run; those require a large and expensive next-generation gene-sequencing machine.

Last summer, Mo Li, an assistant professor of bioscience at King Abdullah University of Science and Technology in Saudi Arabia, was pondering ways he could lend his expertise in genetic engineering and nanopore sequencing to combatting the Covid-19 pandemic. Li, who previously spent six years as a Salk postdoctoral researcher in the Izpisua Belmonte lab, wondered whether a gene-detection approach called isothermal recombinase polymerase amplification (RPA) coupled with real-time nanopore sequencing might be more useful—and faster, cheaper and more portable—than the current Covid-19 testing approach. He teamed up with Izpisua Belmonte to find out.

Unlike PCR, which cycles through lower and higher temperatures to separate DNA strands and copy them, RPA uses proteins—rather than temperature changes—to accomplish the same thing in only 20 minutes. The technology lets researchers copy longer stretches of DNA, and probe for multiple genes at the same time. “We quickly realized that we could use this technique to not only detect SARS-CoV-2, but other viruses at the same time,” says Li.

In the new paper, Li and Izpisua Belmonte describe a small, portable device that can screen 96 samples at the same time using the RPA assay. They call the method Nirvana, for “nanopore sequencing of isothermal rapid viral amplification for near real-time analysis.” The scientists designed Nirvana to simultaneously test samples for Covid-19, influenza A, human adenovirus, and non-SARS-CoV-2 human coronavirus. In just 15 minutes, the researchers report, the device begins to report positive and negative results. And within three hours, the device finalizes results on all 96 samples—including the sequences of five regions of SARS-CoV-2 that are particularly prone to accumulate mutations leading to new variants such as the B.1.1.7 variant identified in the UK.

Li and Izpisua Belmonte tested Nirvana on 10 samples known to be positive for SARS-CoV-2, 60 samples of unknown SARS-CoV-2 status, as well as samples of municipal wastewater harboring the SARS-COV-2 virus and others. In all cases, the assay was able to correctly identify which viruses were present. The sequencing data also allowed them to narrow down the origin of SARS-CoV-2 in positive samples; differentiating strains from China and Europe, for instance. “The design of this assay is really flexible, so it’s not just limited to the examples we’ve shown,” says Li. “We can easily adapt it to tackle another pathogen, even something new and emergent.”

With the small size and portability of the Nirvana workflow, it could be used for fast virus detection at schools, airports or ports, the researchers say. It also could be used to monitor wastewater or streams for the presence of new viruses. “The pandemic has provided two important lessons: first, test widely and quickly, and second, know your variants. Our Nirvana method provides a promising solution to these two challenges not only for the current pandemic but also for possible future ones,” says Izpisua Belmonte, who holds the Roger Guillemin Chair at Salk. Market analysis would be required to determine whether the initial cost of commercialization—and the constant tweaks to the test needed to make sure it detected new variants or new viruses of interest—are worth it, Belmonte adds.

POCT: Why the medical sector must tackle its single-use diagnostic waste

During the Covid-19 pandemic, the use of these single-use diagnostics, or point-of-care tests has exploded. This is having major environmental consequences, experts point out.