Thanks to new tracers, SPECT-CT is also expected to present new prospects for examination and treatment in the future and, if those promising approaches work, they could be ground breaking in the treatment of prostate cancer, for example. Among other questions, EH asked the Director of the Nuclear Medicine Clinic at Erlangen University Hospital, Professor Torsten Kuwert, why there is little talk of the SPECT procedure and whether this indicates PET is superior ‘The PET procedure is a relatively new method which, from a technical point of view, is certainly better than SPECT,’ Professor Kuwert explained. ‘The attention of the research community is therefore focused on this innovation, which can be seen by the number of habilitation treaties written on this subject. Nowadays PET only exists as PET-CT, which enhances the opportunities of application for this procedure. Although SPECT is also now available as SPECT-CT, for example, its use is largely limited to university hospitals in Germany, but the trend looks different worldwide because every other machine sold is a SPECT-CT, so there’s a trend towards a fusion of both procedures.’

‘SPECT-CT represents a clear improvement in diagnostic imaging. Just as in the case of PET-CT, two examinations are carried out directly after one another without the patient having to shift position. The nuclear medical CT image can be overlaid with a radiological CT image and the concentrations of a radioactive tracer, visible in a SPECT-image, can be correlated with the CT image. This results in two distinct advantages: first, concentrations can be characterised better than before; in the case of an iodine SPECT-CT, we can see faster whether a concentration in the neck is benign or malignant, i.e. whether it corresponds with a normal thyroid rest or for instance with a lymph node metastasis. ‘Studies have shown that the precision of diagnosis could the increased by up to 30% through this. Secondly, the changes can be better localised by overlaying the two procedures, for instance to see if they can be surgically removed. This was not previously possible because the resolution for nuclear medical images is much weaker and the tracers only show the disease process, but not the rest of the organs. Through the combination with CT, the SPECT-CT now also shows the anatomy and therefore delivers a significantly better effectiveness for many indications.’
PET-CT also shows the anatomy, so where is the boundary between SPECT-CT and PET-CT? ‘The difference is mainly with the tracers. Whilst we largely work with F-18- Deoxyglucose as a universal oncological tracer, there is no such substance for SPECT. Here we work with the classic nuclear-medical radiopharmaceutical products, such as iodine scintigraphy after thyroid cancer. Bone scintigraphy is also among the classic procedures where the conclusion can be clearly improved with SPECT-CT, and cardiac scintigraphy, where the procedure is used for the attenuation correction of images. Then, of course, there’s tumour scintigraphy – although this works with specific tracers for SPECT, such as the octreotide scintigraphy, which facilitates the detection of neuroendocrine tumours, or the MIBG scintigraphy to diagnose neuroblastoma. With SPECT in particular, there are some promising approaches for new tracers. In my view a new tracer for prostate cancer is simply ground breaking. This tracer, developed by an American company and already trialled in studies, can be used for diagnostic as well as therapeutic purposes.’
What does treatment with tracers mean in practice? ‘During therapy the organic, basic molecule is combined with iodine 131, which – put simply – allows us to treat metastasised prostate cancer with ‘radioiodine therapy’. Moreover, there are other radiotherapeutic products for prostate cancer, such as the alpha emitter that’s currently being trialled in a multi-centric study. All in all, more is happening now in the field of tracers than over the entire past decade. The problem with tracers is that they fall under the pharmaceuticals law and their market is much smaller than with other pharmaceutical products. However, the costs of clinical trials are on a similarly high level to those for a non-radioactive therapeutic agent, which obviously hinders developments in nuclear medicine significantly. Nonetheless, there are still reasons to be hopeful.’
Could there be a SPECT-MRI in the future? ‘It’s certainly conceivable, although the development costs of such a scanner also need to pay off. The examination time would be longer because the MRI sequence is definitely longer than that of a SPECT. Moreover, there is the difficulty of integrating the detectors into the magnetic field. For PET this became possible after a few years of development. However, it’s debatable whether we should continue to follow this path for SPECT because PET-MRI is already available as an alternative, and besides it’s possible to fuse the MRI data with the SPECT retrospectively. With SPECTMRI we can probably expect high acquisition and running costs whilst only being able to carry out a limited number of examinations due to the length of

99mTc-Sestamibi SPECT/CT can aid in the diagnosis of solid renal lesions, especially in cases where contrast enhanced CT findings are inconclusive, according to researchers from the Mallinckrodt…

2011 brought a second year for European and US scientists to meet up at the Annual Scientific Symposium on Ultra High Field Magnetic Resonance, held at the Max Delbrück Centre for Molecular Medicine… 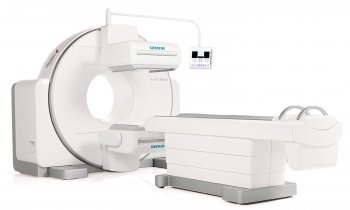 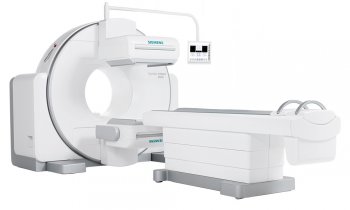