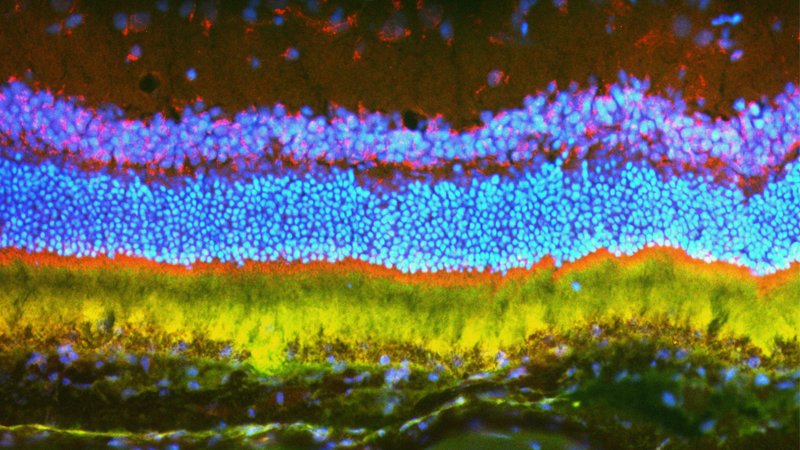 The research provides evidence of the potential value of nanoparticle-delivered gene therapy to treat wet age-related macular degeneration — an eye disease characterized by abnormal blood vessel growth that damages the light-sensitive tissue in the back of the eye — as well as more rare, inherited blinding diseases of the retina.

Many gene therapy approaches depend on viral vectors, which use a virus’s natural ability to carry genetic material into cells. However, viruses create an immune response, which prevents repeat dosing, and the most commonly used one for ocular gene therapy cannot carry large genes. “Some of the most prevalent inherited retinal degenerations are due to mutations in large genes that simply cannot fit into the most commonly used viral vector,” says Peter Campochiaro, M.D., the Eccles Professor of Ophthalmology at the Johns Hopkins University School of Medicine, and a member of the Johns Hopkins Medicine Wilmer Eye Institute.

To overcome such limitations, Campochiaro and Jordan Green, Ph.D., developed a new approach involving a biodegradable polymer that surrounds and compacts long stretches of DNA, creating nanoparticles that can enter the cells. This technology allows the researchers to convert the cells of the eye into minifactories for a therapeutic protein.

Next, the researchers set up a similar experiment, this time using the nanoparticles to shuttle a biologically relevant gene into the eye. They loaded the nanoparticles with a gene for vascular endothelial growth factor (VEGF), which is responsible for the growth of abnormal blood vessels in people with wet macular degeneration.

The researchers injected the eyes of 30 rats with the nanoparticles carrying the VEGF gene and determined the effects in the retina one, two and five months after injection. One month after injection, each rat tested had developed abnormal blood vessels under and within the retina, like those seen in patients with wet macular degeneration. The abnormal blood vessels were more extensive at two and five months after injection, and there was associated scarring under the retina similar to that seen in chronic untreated wet macular degeneration. “These results show that the genes delivered by nanoparticles stayed active within the cells for several months,” says Campochiaro.

Finally, to test a nanoparticle’s ability to deliver a therapeutic gene for the disease, the researchers used mice genetically engineered to develop a form of wet macular degeneration similar to that in humans. The researchers loaded nanoparticles with a gene that produces a protein that neutralizes VEGF.

Currently, physicians inject such proteins that block VEGF proteins into the eyes of people with macular degeneration, a treatment that helps control the overgrowth of abnormal, leaky blood vessels. But this procedure must be repeated frequently and is burdensome for patients and their caretakers.

Three weeks after injecting nanoparticles containing the gene for the anti-VEGF protein, the mice had a 60% reduction in abnormal blood vessels when compared to control mice. The same effect was seen 35 days later. “These results are extremely promising,” says Jordan Green, Ph.D., professor of biomedical engineering at the Johns Hopkins University School of Medicine. “We have the ability to reach the cells most significantly affected by degenerative eye disease with nonviral treatments that can allow the eye to create its own sustained therapies.”