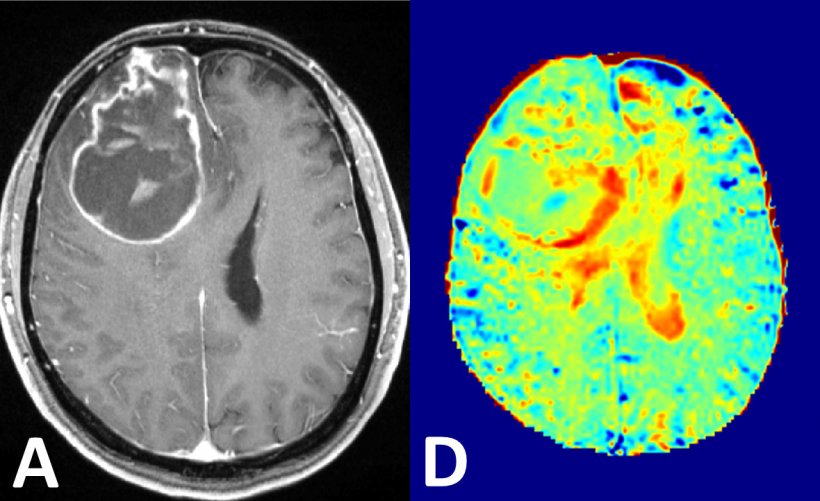 Dr Paech, you found a way to detect brain tumours using glucose. Could you describe your method?

‘Conventional MRI measures proton signals in water. Since about 60 percent of our body consists of water, a clear image can be generated. Contrast agents intensify the signals in the vessels and between the cells, albeit they do not enter the cells themselves. Glucose on the other hand is taken up by the cells and metabolised. Tumour cells need sugar to meet their high energy demand.

‘To visualise the much lower levels of glucose I, and my colleagues Patrick Schünke and Moritz Zaiss from the Division of Medical Physics in Radiology, have developed a method to selectively intensify the glucose signal. It’s based on the physical process of magnetisation transfer, which means the signal of the glucose protons is transferred to the body water measured during the MRI procedure. This effect is proportional to the local glucose level and thus maps the regional change in the glucose level.

‘After completion of the initial technical developments, we conducted a proof-of-concept study with a group of ten glioblastoma patients. In this study we could confirm increased glucose signal in the tumours.’

PET has long been used to visualise increased sugar metabolism in tumours. How does your method differ from those techniques?

‘PET uses radioactively marked glucose molecules. We work without radioactivity, which means there is zero radiation exposure for the patient. However, there is one difference to radioactive tracers: we don’t know yet whether our images contain metabolism information or, as in conventional MR images, only perfusion of tumour tissue and normal vessels. Thus, it’s very possible that we only see increased tumour perfusion, but not increased metabolic activity. At this point we are doing basic research which does not compete with PET procedures, but which is a discrete method.’ 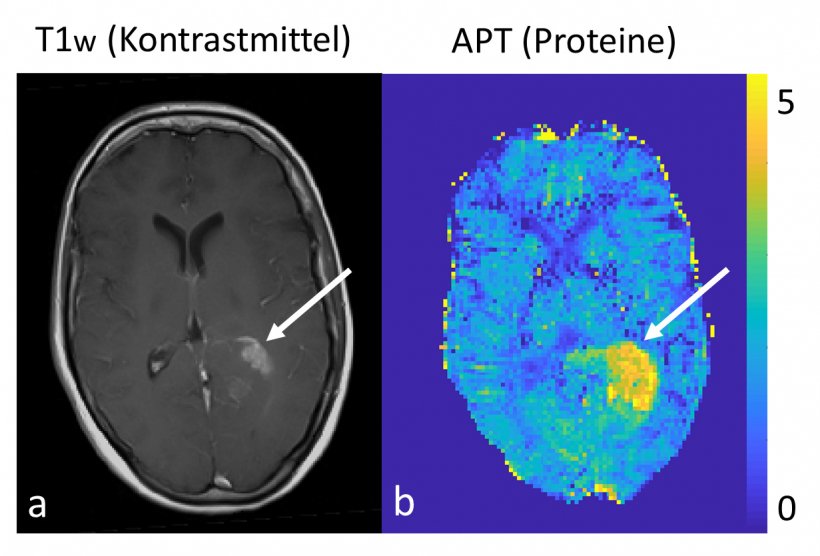 In a different study you conducted protein measurements in brain tumours. What were the results?

‘Our objective was the development of contrast-free 7-Tesla MRI and isolation of specific protein signals. In native sequences we examined glioma patients to find out whether there is a correlation with histopathology parameters such as IDH mutation status or MGMT promotor methylation status. We were indeed able to confirm strong correlation with IDH mutation status. just like our glucose MRI project, this approach uses a chemical transfer effect between proteins and the water in the tissue, the so-called chemical exchange saturation transfer – CEST.

‘Furthermore, we wanted to find out whether this protein signal correlates in some way, shape or form with the therapy response and patient survival, that is prognosis.

Article • Maps of the brain

Ultra-high-field magnetic resonance tomography with field strength of 7 Tesla is slowly but surely entering clinical routine. ‘Thanks to very high spatial and spectral resolution, ultra-high-field MR permits detailed views of the human anatomy and can show precisely the metabolic processes such as those in the brain,’ said Professor Siegfried Trattnig, from Vienna’s Medical University.

‘We found an inverse correlation of progression-free survival and overall survival of glioma patients with the protein signal. This means when the tumour shows a very high percentage of protein, patient prognosis is poorer. Thus, the protein signal seems to indicate tumour aggressiveness.

‘In a next step, we plan to check whether these results also apply to other tumours or organs, in particular breast and prostate cancer, because these tumours have a much higher incidence than brain tumours and are thus even more relevant to society at large.

‘We also want to find out whether these protein measurements can be conducted with less powerful MRI scanners. Currently these techniques can only be performed at 7-Tesla because the metabolite level is low and the measured effects are small. We profit from the strong magnetic field of the 7-Tesla scanner. We aim to transfer the method to 3-Tesla MR systems to make it more widely available. However, at this point it’s entirely unclear whether these low levels can be reliably measured at 3-Tesla.’

What other new MRI contrast agents are you working on?

‘We want to find MRI contrast agents that provide information that’s not provided by the currently available sequences, in order to contribute to a permanent improvement of patient care. X nuclei MR imaging is particularly promising. Normally, MRI measures the magnetic moment of the hydrogen nuclei linked to the spin. However, X core MRI measures the magnetic moment of other nuclei, such as the sodium nucleus, or certain oxygen isotopes that provide other physiological information. A conventional MRI scan does not yield this information because the level of these substances in the body in relation to the water is much, much lower. That means we need high-field strength.’

Dr Daniel Paech MD MSc is resident physician and researcher in diagnostic radiology at the German Cancer Research Centre in Heidelberg (DKFZ). He gained his physics diploma in 2011 and, in 2015 his medical degree exam at the University of Karlsruhe, Heidelberg and the Sorbonne in Paris. He is medical director of 7-Tesla MRI in Professor Heinz-Peter Schlemmer’s radiology department at the German Cancer Research Centre, Heidelberg.

Early detection of tumors is extremely important in treating cancer. A new technique developed by researchers at the University of California, Davis, offers a significant advance in using magnetic…