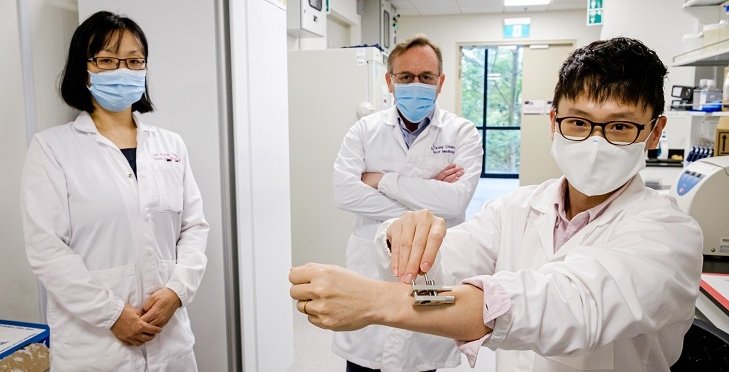 In a paper published in Science Advances, the researchers showed that bringing together two magnets so that they pinch and apply pressure to a fold of skin, led to short term changes in the skin barrier and specifically the formation of “micropores” underneath its surface.

In tests, they showed that these micropores, of about 3 micrometres in area, allowed drugs applied on the surface of the skin to diffuse through it more easily. Six times greater quantity of drug diffused through the skin of mice with the micropores compared to the skin of mice which did not receive the temporal pressure treatment.

Lead author of the paper, Dr Daniel Lio, who did this research as part of his doctoral thesis at NTU’s School of Chemical and Biomedical Engineering, Interdisciplinary Graduate Programme, said that while needles and microneedle injections damage the skin, micropores could pave the way towards painless transdermal delivery of drugs such as insulin. “Our research project was first inspired by the traditional Chinese medicine ‘tuina’ therapy where physicians rub and apply pressure on skin and muscle tissue and apply a topical ointment,” explained Dr Lio, who is now working at A*STAR’s Enterprise Group.

Healthcare in Taiwan: Between high-tech and tradition

Within a groaning 140-tonne particle accelerator a patient receives proton therapy, whilst down a few corridors, acupuncture needles are being placed and herbs mixed. Tradition and high tech walk hand in hand in Taiwanese healthcare. That’s what we learn during our visit to several facilities near Taipei.

Experimental results showed that nanoparticles and insulin were effectively delivered through the skin of mice, at molecular masses up to 20,000 daltons. This mass is 40 times the largest currently reported in the scientific literature for transdermal drug delivery (i.e. via patches), which is 500 daltons. The amount of drug delivered via the temporal pressure method was also comparable to the amount delivered by a microneedle patch – dozens of needles smaller than the width of a human hair made from biocompatible compounds, commonly used to deliver small amounts of drugs through the skin over time. Compared to conventional injection where the skin has to be penetrated and there is a risk of a hypoglycaemia effect – when the injected insulin acts too fast and the patient gets dizzy – the new method is able to slowly deliver drugs over time without breaking the skin, thus causing less pain.

In experiments, the team also found that with their method, cells in the skin layer (epidermis) were observed to have an increase in the number of “gap junctions” and a reduction in “tight junctions”. These junctions control the amount of molecules being delivered between the cells: if there is an increased expression of gap junctions, more molecules can be delivered across the cell barrier, while tight junctions restrict the extracellular movement of molecules. In the animal experiments, two magnets were used to apply pressure on the mouse dorsal skin for 1 or 5 minutes, depending on how fast the drug delivery is needed, before being removed and the drug is then topically applied like a cream. The team hypothesised that for drugs that need to be delivered more slowly or in smaller doses – 1 minute would be sufficient, while for drugs to be delivered faster, more micropores would be needed, therefore 5 minutes would be required. The drug was then left for 12 hours before the skin was imaged with fluorescent microscopy to see to what extent the drug had penetrated through the skin.

Every year, a lack of vaccination leads to about 1.5 million preventable deaths, primarily in developing nations. One factor that makes vaccination campaigns in those nations more difficult is that there is little infrastructure for storing medical records, so there’s often no easy way to determine who needs a particular vaccine. Researchers at the Massachusetts Institute of Technology (MIT)…

The team compared three types of skin: skin that received pressure treatment, skin which had not, and skin which had drugs delivered through microneedles. Skin that received pressure treatment had similar amounts of drug delivered through the skin to that found with a microneedle patch, while skin that did not receive the pressure treatment had significantly less drug delivered. Micropores were also observed to disappear a day after they were formed, which suggests that the skin cells have filled up the gaps. Prof Becker, whose research expertise is in tissue repair and regeneration, said their paper highlighted the potential to use this method which could alleviate the need for diabetes patients to inject insulin multiple times daily using conventional needles and syringes. “Patients who have to inject drugs daily, such as insulin, are constantly asking whether there is another way to deliver their medicines that doesn’t involve hurting or penetrating the skin. Our new findings hold promise for them and we hope that we can refine this method so that one day it may be possible to deliver enough drugs through the skin via a patch and to rid them of their daily injections,” Prof Becker added.

This multidisciplinary project, supported by the Skin Research Institute of Singapore (SRIS) – a collaboration between A*STAR, National Skin Center (NSC) and NTU, took two years and is continuing. It is also supported by multiple grants from various agencies, which include A*STAR, SRIS, and the National Medical Research Council. The team has since filed a patent for a pressure device, which looks like a vice-like clamp for the skin, through NTU’s innovation and enterprise company, NTUtive, and is currently carrying out further experiments to refine the drug delivery mechanism.

Covid-19 vaccinations that combine two or more distinct variants of SARS-CoV-2 could offer protection against current and future ‘variants of concern’, say scientists from UK and Austria.

A newly developed capsule that tunnels through mucus in the GI tract could be used to orally administer large protein drugs such as insulin.