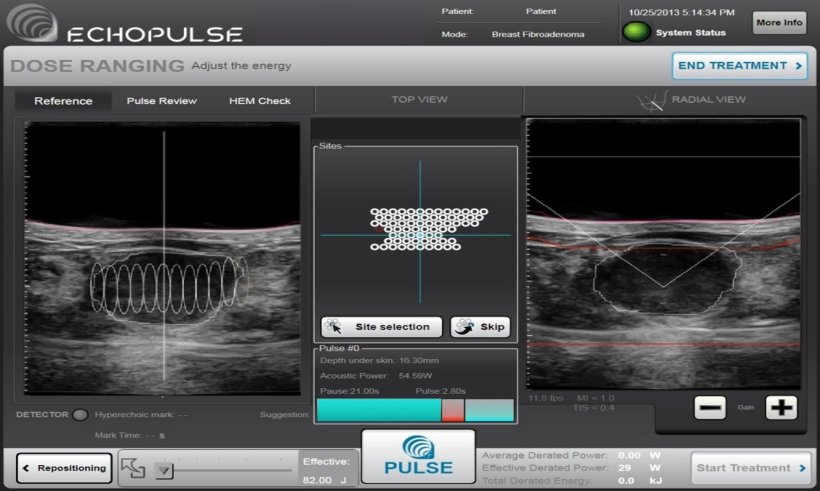 Image courtesy of Dr Brenin and the University of Virginia

The University of Virginia (UVA) in Charlottesville has been pioneering the use of FUS to treat multiple diseases. Breast surgeon David R Brenin, MD, has been collaborating with Patrick Dillon, MD, an associate professor of haematology/oncology, for the past eight years to investigate how FUS ablation can be used to treat benign breast tumours, early-to-late-stage breast cancer, and metastatic breast cancer. ‘This is an active field of research,’ commented Brenin. ‘There currently are four clinical trials underway at the UVA. Our approach has been a stepwise one, first treating benign breast tumours, specifically fibroadenomas.’

Fibroadenomas are one of the most common benign tumours of the breast, but they can be quite bothersome to patients, producing a mass in the breast and often causing significant pain and tenderness. If large enough, they can change the contour of the breast. The typical management of these tumours consists of observation or surgical excision. Many patients are worried about them and wish to have them removed. Currently the most common option is surgery, but transcutaneous FUS ablation offers the advantage of not leaving a scar.

FUS ablation significantly reduces the size of the tumour; UVA’s clinical trial of 20 patients reduced fibroadenomas at 12 months by a median 68.9%. For this procedure, the mass is localised with standard ultrasound imaging and degassed localized anaesthesia is injected around the tumour. The transducer head is positioned to allow optimal imaging of the mass. Targeting and treatment planning is performed in multiple planes throughout the mass. General anaesthesia is not needed. The entire patient experience is less than 2.5 hours, and patients may return to work or normal activities the following day. ‘A clinical trial which will enrol 100 patients who will undergo FUS ablation treatment is nearing completion,’ said Brenin. He hopes that the findings will persuade the U.S. Food and Drug Administration (FDA) to clear its use to treat benign fibroadenomas.

Unfortunately, breast cancer cells have lots of tricks up their sleeves to fool T-cells into thinking that they are not invaders

New novel immunotherapy and FUS treatments may offer a new way of treating chemotherapy-resistant and radiotherapy-resistant breast tumours. T-cells, a type of white blood cells that are created by a patient's immune system, can help kill cancer cells. To do this, T-cells need to move to the tumour, infiltrate into it, recognize that malignant cells are different from them, and attack them. ‘Unfortunately, breast cancer cells have lots of tricks up their sleeves to fool T-cells into thinking that they are not invaders. One such trick is to “tell’” a lymphocyte that a breast cancer cell is part of a patient's normal tissue,’ he explained. ‘Another is for the tumour to recruit certain types of white blood cells that have the ability to confuse T-cells as well.’

Anti-programmed cell death ligand 1 (PDL1) drugs prevent PDL1 proteins from “tricking” the T-cells, enabling them to kill the cancer cells. However, they are not very effective in treating patients with minimally immunogenic cancers, like breast cancer.

Brenin and Dillon initiated two randomised clinical trials, one for patients with early–stage breast cancer and the other for patients with metastatic breast cancer. Both are intended to determine if the combination of immunotherapy drugs and FUS ablation will be more effective than the drug by itself or FUS ablation by itself. They hypothesize that the combination of FUS ablation and immunotherapy drugs will decrease myeloid-derived suppressor cells and increase T cell activity, as well as be safe and effective.

Breast cryoablation is an emerging treatment for early-stage, localized breast cancer that destroys malignant tumours by freezing them. During the past decade, it has been increasingly utilized as an…