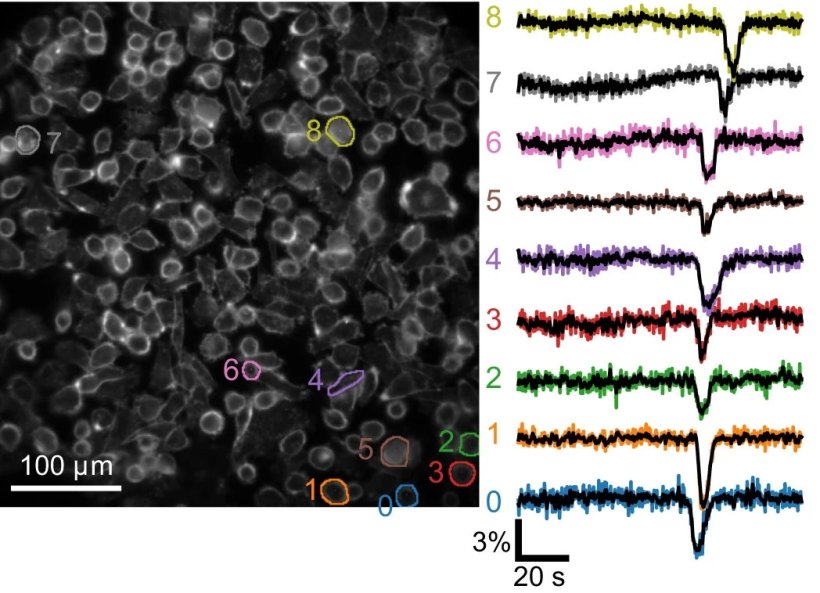 A wave of voltage fluctuations seen across the cells

When cells become cancerous, they undergo a series of bioelectric changes. For example, the layer surrounding cells, called the cell membrane, becomes more positively charged than healthy cell membranes. This new research, published in Communications Biology, found that as well as the membrane voltage being higher than in healthy cells, it also fluctuates over time – with breast cancer cells behaving much like neurons. The researchers believe this could indicate an electrical communications network between cancer cells that could in future be a target for disruption, creating possible new treatments. Co-lead author Dr Amanda Foust, from Imperial's Department of Bioengineering, said: "When healthy cells become cancerous, the changes they undergo can help them to grow and spread. We know, for example, that certain genes that control cell multiplication can switch off, causing uncontrolled cell growth. We don't yet know why the voltage of membranes fluctuates in cancer cells but our discovery and technology, enabled by the exciting collaboration of engineers and biologists, opens doors to further work that could help us better understand cancer signalling networks and growth."

To test the voltages, the researchers grew cells from eight breast cancer cell lines and one healthy breast cell line. They then recorded the voltages of their cell membranes with a microscope originally engineered to film electrical activity in brain cells, before using machine learning to categorise and characterise the signals. Unexpectedly, they found fluctuations in the voltage of the cancer cell membranes. Though more research is needed, the researchers suspect the 'blinking' and 'waving' electrical signals might be a form of communication between cells.

They added tetrodotoxin, a potent neurotoxin that blocks sodium channels to prevent the generation of electrical charge in nerve cells. Previous studies had shown that cancer cells rely on these sodium channels to become more invasive. They found that, similarly to its effect on nerve cells, tetrodotoxin suppressed the voltage fluctuations in cancer cells. The researchers say this could potentially indicate new treatment avenues for blocking cancer cell communication and behaviour.

Co-lead author Professor Chris Bakal, Professor of Cancer Morphodynamics at The Institute of Cancer Research, London, said: "This is the first time we've observed such rapid fluctuations in electrical activity within breast cancer cells. It looks like breast cancer cells have established a type of electrical language. We still don't know how complex the language is, but it could allow cancer cells to relay information about nearby nutrients or hostile environments across large distances, and ultimately promote tumour survival."

To further test their findings, they induced cancer in the healthy cell line before recording them again. They found that once these cells had become cancerous, the voltage of their membranes was also fluctuating. The level of electrical signals varied across cancer types. The more aggressive and untreatable cancer cell lines featured more frequent fluctuations, with signals sometimes appearing as a wave traveling from cell to cell.

Co-author Emeritus Professor Mustafa Djamgoz at Imperial's Department of Life Sciences said: "Of all the cells in the body, we usually associate 'excitable' brain or heart cells with electrical activity. Our research suggests a hidden electrical signalling network among cancer cells that might play a key role in cancer cell behaviour including communication with each other and other cells within the tumour. We know already that the spreading of cancer, the main cause of death from cancer, is facilitated by electrical activity." Professor Bakal added: "We think these networks may even allow cancer cells to form brain-like structures that allow cancer cells to act together as a single machine, rather than as individual units."

The researchers are now working to identify and unpick the potential links between cell membrane voltage and the behaviour of cancer cells, to see if they can be cut. Professor Bakal said: "If you can stop cancer cells communicating with one another, they could become easier to treat. It's not so dissimilar from a war. If you can stop a commander from relaying information to soldiers at the front, the battle becomes easier to win."

Dr Foust said: "We are now investigating the role of voltage in cancer cell behaviour. Do cancer cells clone themselves and multiply as their voltage fluctuates in a certain pattern, or break off to invade other body parts? Can we use this knowledge to interject at a particular stage of fluctuation to prevent cancer spread? These are key questions we hope to answer with our ongoing work."