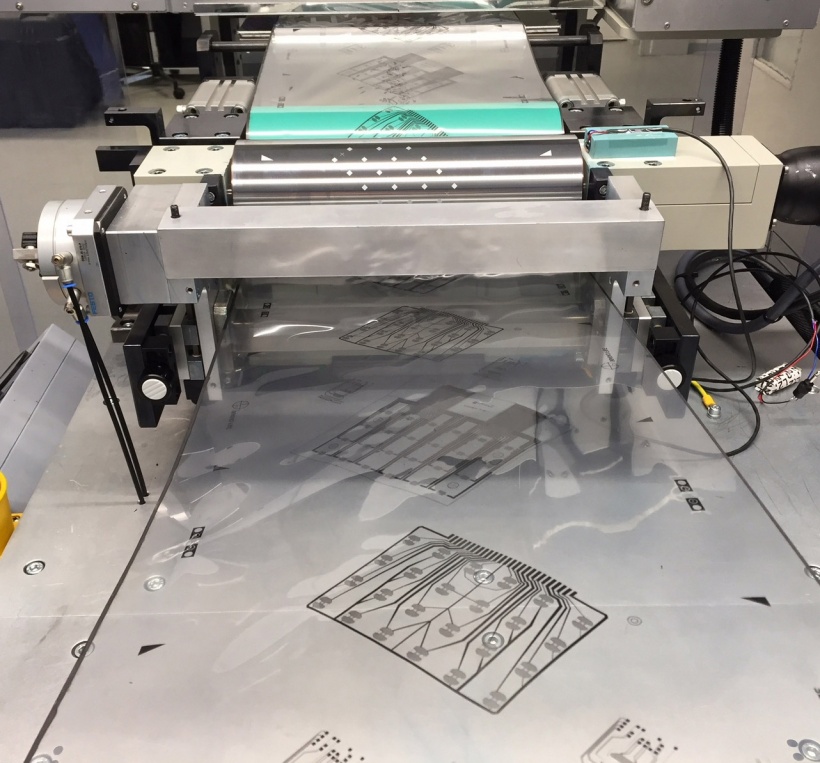 As a result, they are often not used. Cost factors for sensors that perform measurements electrically are the expensive electrode material and complex production. Fraunhofer scientists are now producing biosensors with graphene electrodes cheaply and simply in roll-to-roll printing. A system prototype for mass production already exists. Cell-based biosensors measure changes in cell cultures via electrical signals. This is done by means of electrodes which are mounted inside the Petri dish or the wells of a so-called well plate. If added viruses destroy a continuous cell layer on the electrodes, for example, the electrical resistance measured between the electrodes is reduced. In this way, the effect of vaccines or drugs (for example) can be tested: the more effective the active ingredient is, the smaller the number of cells that are destroyed by the viruses and the lower the measured resistance change will be. Also toxicity tests, such as on cosmetic products, can function according to the same principle and may replace animal experiments in the future. Another advantage: If biosensors are linked to an evaluation unit, measurements can be continuous and automated.

The preparation of the described biosensors is expensive and complex, though: the electrodes are made of a biocompatible and electrically conductive material, such as gold or platinum. The production of microelectrodes requires a complicated lithographic process. The result: The laboratories often do not buy these biosensors because of the high costs, and the examination of the cell cultures continues to be performed manually under a microscope. As an alternative to precious metals, however, graphene can now be used as a material for the electrodes. The advantages of the carbon material: it is electrically conductive, biocompatible and, if in the form of an ink, can be printed on surfaces.

Scientists at the Fraunhofer Institute for Biomedical Engineering IBMT in St. Ingbert in Germany’s Saarland region have made use of such a graphene ink. Together with industry partners in the M-era.Net project BIOGRAPHY, which is funded by the German Federal Ministry of Education and Research (BMBF), they have developed a printing process which makes it possible to produce large numbers of graphene biosensors in a cost-effective roll-to-roll process. "Our system prototype can print about 400 biosensors per minute on a continuous foil," Dr. Thomas Velten, Head of the Biomedical Microsystems Department at IBMT and Project Manager of BIOGRAPHY, says in describing the result of the development work. While the printing equipment and graphene ink are provided by the partners involved, the scientists at the IBMT have taken care of the design of the printing process. "In particular, it is crucial to adjust parameters such as the ink viscosity, printing speed, doctor blade pressure – a doctor blade wipes off excess ink – and well depth of the printing cylinder so that the printed structures correspond to the nominal dimensions," explains Velten. An interdisciplinary team of biologists and engineers from the IBMT have also developed a protein ink, which is printed directly onto the electrodes after the graphene. Velten: "It’s only thanks to the proteins that the cells adhere well enough to the electrode foil". A complicated process: the surface energies of the foil and ink have to be adapted to one another in such a way that the transfer of the ink from the printing cylinder to the foil takes place optimally. Particularly critical is the drying of the printed structures, since the proteins do not tolerate solvents or high temperatures. Only the right mix of ink ingredients and drying method ensures that the ink will dry quickly enough.

After the successful construction of the prototype, the practical tests of the printed biosensors will follow. Project Manager Velten: "We expect to be able to offer the industry a universal technology platform in no later than a year".

Where do clots begin?