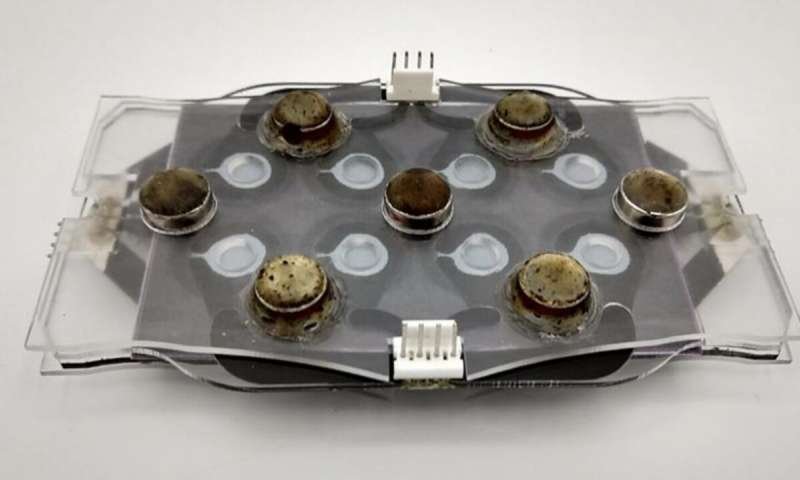 Researchers have developed a new device for faster testing of antibiotic-resistant bacteria.

Combatting the infections is no easy task, though. When antibiotics are carelessly and excessively prescribed, that leads to the rapid emergence and spread of antibiotic-resistant genes in bacteria—creating an even larger problem. According to the Centers for Disease Control and Prevention, 2.8 million antibiotic-resistant infections happen in the U.S. each year, and more than 35,000 people die from of them.

One factor slowing down the fight against antibiotic-resistant bacteria is the amount of time needed to test for it. The conventional method uses extracted bacteria from a patient and compares lab cultures grown with and without antibiotics, but results can take one to two days, increasing the mortality rate, the length of hospital stay and overall cost of care.

Associate Professor Seokheun "Sean" Choi—a faculty member in the Department of Electrical and Computer Engineering at Binghamton University's Thomas J. Watson College of Engineering and Applied Science—is researching a faster way to test bacteria for antibiotic resistance. "To effectively treat the infections, we need to select the right antibiotics with the exact dose for the appropriate duration," he said. "There's a need to develop an antibiotic-susceptibility testing method and offer effective guidelines to treat these infections."

In the past few years, Choi has developed several projects that cross "papertronics" with biology, such as one that developed biobatteries using human sweat.

This new research relies on the same principles as the batteries: Bacterial electron transfer, a chemical process that certain microorganisms use for growth, overall cell maintenance and information exchange with surrounding microorganisms. "We leverage this biochemical event for a new technique to assess the antibiotic effectiveness against bacteria without monitoring the whole bacterial growth," Choi said. "As far as I know, we are the first to demonstrate this technique in a rapid and high-throughput manner by using paper as a substrate."

Working with Ph.D. students Yang Gao (who earned his degree in May and is now working as a postdoctoral researcher at the University of Texas at Austin), Jihyun Ryu and Lin Liu, Choi developed a testing device that continuously monitors bacteria's extracellular electron transfer.

A medical team would extract a sample from a patient, inoculate the bacteria with various antibiotics over a few hours and then measure the electron transfer rate. A lower rate would mean that the antibiotics are working. "The hypothesis is that the antiviral exposure could cause sufficient inhibition to the bacterial electron transfer, so the readout by the device would be sensitive enough to show small variations in the electrical output caused by changes in antibiotic effectiveness," Choi said.

The device could provide results about antibiotic resistance in just five hours, which would serve as an important point-of-care diagnostic tool, especially in areas with limited resources.

The prototype—built in part with funding from the National Science Foundation and the U.S. Office of Naval Research—has eight sensors printed on its paper surface, but that could be extended to 64 or 96 sensors if medical professionals wanted to build other tests into the device.

Building on this research, Choi already knows where he and his students would like to go next: "Although many bacteria are energy-producing, some pathogens do not perform extracellular electron transfer and may not be used directly in our platform. However, various chemical compounds can assist the electron transfer from non-electricity-producing bacteria. For instance, E. coli cannot transfer electrons from the inside of the cell to the outside, but with the addition of some chemical compounds, they can generate electricity. Now we are working on how to make this technique general to all bacteria cells."

The research was published in Biosensors and Bioelectronic.

How the TB bacterium develops rapid resistance to antibiotics

For a slow-growing microbe that multiplies infrequently, Mycobacterium tuberculosis, the pathogen that causes tuberculosis (TB) has long puzzled researchers as to how it develops resistance to…