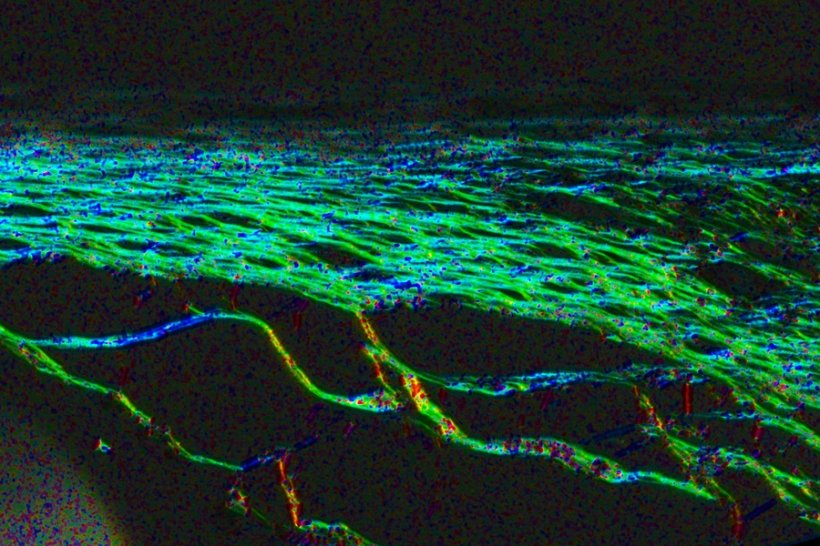 With a new approach, the scar tissue (pictured) that usually develops around medical implants has a more aligned architecture that allows drugs to pass through more easily.

Implantable devices that release insulin into the body hold promise as an alternative way to treat diabetes without insulin injections or cannula insertions. However, one obstacle that has prevented their use so far is that the immune system attacks them after implantation, forming a thick layer of scar tissue that blocks insulin release.

This phenomenon, known as the foreign body response, can also interfere with many other types of implantable medical devices. However, a team of MIT engineers and collaborators has now devised a way to overcome this response. In a study of mice, they showed that when they incorporated mechanical actuation into a soft robotic device, the device remained functional for much longer than a typical drug-delivery implant.

The device is repeatedly inflated and deflated for five minutes every 12 hours, and this mechanical deflection prevents immune cells from accumulating around the device, the researchers found.

“We’re using this type of motion to extend the lifetime and the efficacy of these implanted reservoirs that can deliver drugs like insulin, and we think this platform can be extended beyond this application,” says Ellen Roche, the Latham Family Career Development Associate Professor of Mechanical Engineering and a member of MIT’s Institute for Medical Engineering and Science.

Among other possible applications, the researchers now plan to see if they can use the device to deliver pancreatic islet cells that could act as an “bioartificial pancreas” to help treat diabetes. 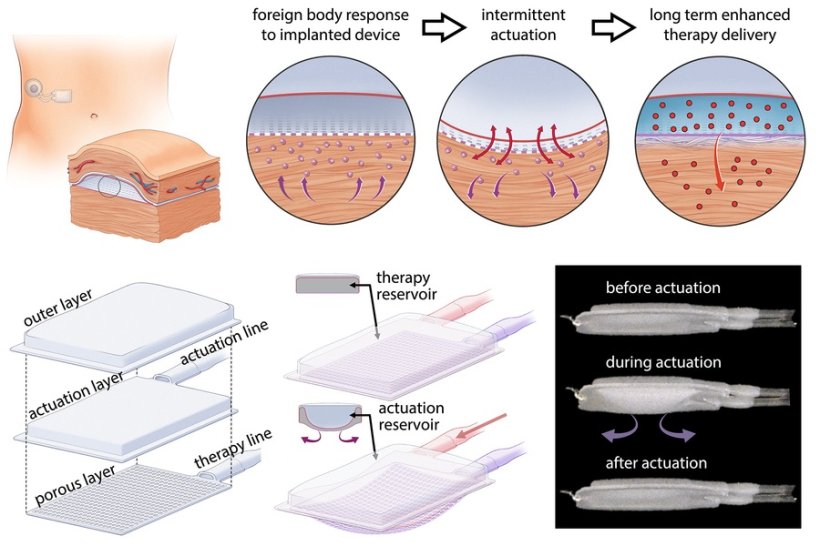 The drug-delivery system includes an actuator that repeatedly inflates and deflates the device for five minutes every 12 hours. This mechanical deflection prevents immune cells from accumulating around the device.

Most patients with type 1 diabetes, and some with type 2 diabetes, have to inject themselves with insulin on a daily basis. Some patients use wearable insulin pumps that are attached to the skin and deliver insulin through a tube inserted under the skin, or patches that can deliver insulin without a tube.

For many years, scientists have been working on insulin-delivering devices that could be implanted under the skin. However, the fibrous capsules that form around such devices can lead to device failure within weeks or months.

Researchers have tried many approaches to prevent this kind of scar tissue from forming, including local delivery of immunosuppressants. The MIT team took a different approach that does not require any drugs — instead, their implant includes a mechanically actuated soft robotic device that can be inflated and deflated. In a 2019 study, Roche and her colleagues (with Eimear Dolan, a former postdoc in her lab who is now a faculty member at the National University of Ireland at Galway, as first author) showed that this kind of oscillation can modulate how nearby immune cells respond to an implanted device.

In the new study, the researchers wanted to see if that immunomodulatory effect could help improve drug delivery. They built a two-chambered device made of polyurethane, a plastic that has similar elasticity to the extracellular matrix that surrounds tissues. One of the chambers acts as a drug reservoir, and the other acts as a soft, inflatable actuator. Using an external controller, the researchers can stimulate the actuator to inflate and deflate on a specific schedule. For this study, they performed the actuation every 12 hours, for five minutes at a time.

This mechanical actuation drives away immune cells called neutrophils, the cells that initiate the process that leads to scar tissue formation. When the researchers implanted these devices in mice, they found that it took much longer for scar tissue to develop around the devices. Scar tissue did eventually form, but its structure was unusual: Instead of the tangled collagen fibers that built up around static devices, collagen fibers surrounding actuated devices were more highly aligned, which the researchers believe may help drug molecules to pass through the tissue.

To demonstrate the potential usefulness of this device, the researchers showed that it could be used to deliver insulin in mice. The device is designed so that insulin can slowly seep out through pores in the drug reservoir or be released in a large burst controlled by the actuator.

The researchers evaluated the effectiveness of the insulin release by measuring subsequent changes in the mice’s blood glucose levels. They found that in mice with the actuated device, effective insulin delivery was maintained throughout the eight weeks of the study. However, in mice that did not receive actuation, delivery efficiency began to wane after only two weeks, and after eight weeks, almost no insulin was able to pass through the fibrous capsule.

The authors also created a human-sized version of the device, 120 millimeters by 80 millimeters, and showed that it could be successfully implanted in the abdomen of a human cadaver. “This was a proof of concept to show that there is a minimally invasive surgical technique that could potentially be employed for a larger-scale, human-scale device,” MIT postdoc Debkalpa Goswami says.

Working with Jeffrey Millman of the Washington University School of Medicine in St. Louis, the researchers now plan to adapt the device so that it could be used to deliver stem-cell-derived pancreatic cells that would sense glucose levels and secrete insulin when glucose is too high. Such an implant could eliminate the need for patients to constantly measure their glucose levels and inject insulin.

“The idea would be that the cells would be resident in the reservoir, and they would act as an insulin factory,” Roche says. “They would detect the levels of glucose in blood and then release insulin according to what was necessary.”

Other possible applications the researchers have explored for this kind of device include delivery of immunotherapy to treat ovarian cancer, and delivering drugs to the heart to prevent heart failure in patients who have had heart attacks.

“You can imagine that we can apply this technology to anything that is hindered by a foreign body response or fibrous capsule, and have a long-term effect,” Roche says. “I think any sort of implantable drug delivery device could benefit.”

The research appears in Nature Communications.

Due to their tissue-like mechanical properties, hydrogels are being increasingly used for biomedical applications; a well-known example are soft contact lenses. These gel-like polymers consist of 90…