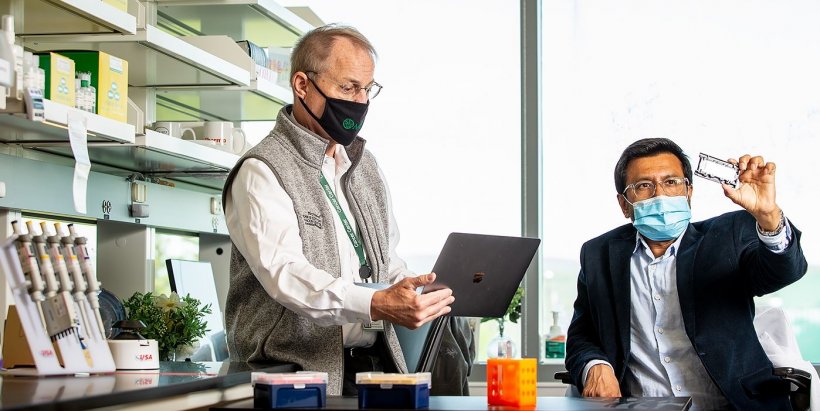 Not only are therapeutic options limited, but nearly half of PDAC patients who have their tumors removed surgically experience disease recurrence within a year, even with chemotherapy. For more advanced stages, approximately one-third of patients have a limited response to chemotherapy.

To help PDAC patients, Researchers at Dartmouth’s and Dartmouth-Hitchcock’s Norris Cotton Cancer Center (NCCC) are developing a prognostic and therapeutic epigenetic biomarker, the first ever epigenetic precision medicine approach to pancreatic cancer. Epigenetic therapy is therapy that can reactivate regulatory genes in chemo-resistant tumors to make the tumors responsive to chemotherapy. The discovery will address the pressing clinical need for treatment of this disease in which physicians are able to utilize a tailored approach, known as precision medicine, as a means toward better outcomes and quality of life for patients.

The team’s work is newly published in Nature Communications.

Led by NCCC Director Steven D. Leach, MD, and Senior Research Scientist in the Leach laboratory, Surajit Dhara, PhD, in collaboration with colleagues at the Memorial Sloan Kettering Cancer Center and Weill Cornell Medicine in New York, the team’s discoveries will help predict those patients who will benefit from traditional chemotherapy and those who may need and benefit from an alternative regimen.

Although there are nine FDA-approved epigenetic drugs, and more in the pharmaceutical pipeline, a means of distinguishing tumors that would benefit from this type of reprogramming therapy is still lacking. “We currently appear to be at the start of a new era in which epigenetic reprogramming will become increasingly relied upon to optimize therapeutic effectiveness in multiple tumor types,” says Leach. “With this work, we have pioneered a precision epigenetic treatment approach in PDAC, an approach that is now ready to be translated into the clinic.”

“We have a discovery and an invention coming from this work,” says Dhara. “By investigating all epigenetic elements that regulate genes in PDAC, we discovered that only about 1,092 elements are associated with chemotherapy resistance and early recurrence of this disease. Of those, 723 elements are silenced in chemo-resistant tumors and are optimally predictive.”

To translate this knowledge into the clinic, Leach and Dhara invented a technology platform that assesses gene regulatory elements as a means to predict chemotherapy response and the potential benefit of epigenetic therapy in patients with PDAC. The technology is DNA-based and can potentially be performed on fine-needle aspiration specimens collected from tumors at the time of diagnosis. Leach and Dhara have co-founded Episteme Prognostics, Inc.,--a precision medicine company developing therapeutic biomarkers for pancreatic cancer--in order to translate this work directly to the clinic as rapidly as possible.

Why do alterations of certain genes cause cancer only in specific organs of the human body? Scientists at the German Cancer Consortium (DKTK), the Technical University of Munich (TUM), and the…

A new way to target a mutant protein which can cause the deadliest of cancers in humans has been uncovered by scientists at Leeds. The mutated form of the RAS protein has been referred to as the…

With an overall survival rate of 9% for those diagnosed, pancreatic cancer remains exceedingly difficult to treat. However, the patient's primary tumor typically isn't what leads to death - it is the…