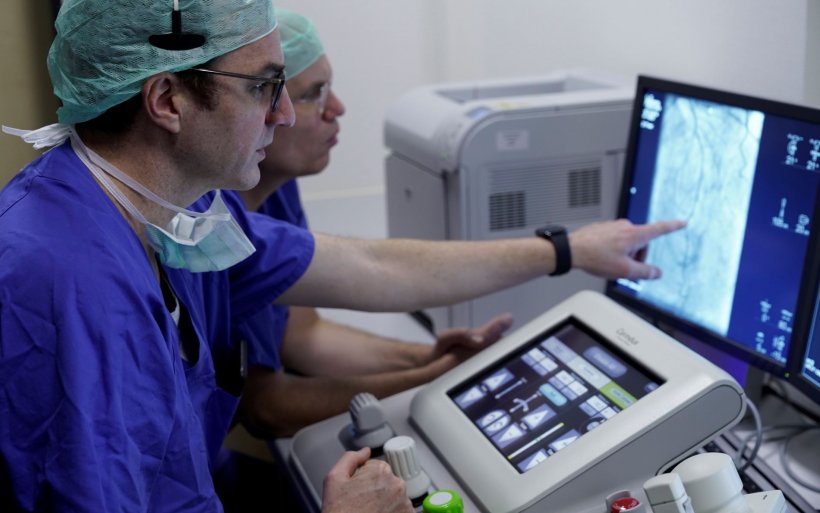 A couple of months later, the Corindus endovascular robotic system CorPath GRX was used to implant a vascular stent into an obstructed coronary artery – the first use of this minimally invasive procedure to be performed in a German hospital.

The precision-robot platform is currently the only robot-assisted system for cardiovascular and peripheral, vascular interventions that has FDA clearance and the CE mark. ‘We would like to expand our portfolio for therapy,’ explained David Winneberger, head of Global Marketing Cardiology at Siemens Healthineers. ‘Part of our strategy 2025 is the promotion of image-guided therapy to lower the treatment costs not only for our customers but also the entire healthcare sector.’

In Germany, Professor Holger Nef, Assistant Director of the Cardiology and Angiology department at the University Hospital Giessen, and his team were the first to benefit from the CorPath GRX. They used the Corindus endovascular robot combined with an Artis angiography system from Siemens Healthineers to implant a stent via catheter in a percutaneous coronary intervention. ‘I was surprised how intuitive and easy using the robot is, and how fast the procedure can be carried out,’ Nef said.

In a test installation, Nef and team have now treated three patients with the help of the CorPath; their objective is to treat 250 patients a year; they aim to establish quality standards for interventional cardiology. Despite the fact that the interventionalists have learnt a lot over the last 40 years, and although the equipment has improved significantly, the treatment of coronary artery stenosis is still susceptible to errors, depending on the various degrees of expertise among those carrying out the treatment. ‘The precise placement of the stent or the estimation as to the length of the stenosis very much depend on the experience of whoever is carrying out the treatment,’ observed Nef, who plans to carry out a study to illustrate this. Experienced interventionalists and those with less experience are to work manually as well as with robotic assistance. He expects to see big differences with manual PCI, but not with the robot-assisted procedure.

Doctors as well as patients benefit from CorPath. Because the robot is guided from a room outside the operating theatre, doctors are exposed to much less radiation. ‘Up to now, we’ve had to wear heavy X-ray protection aprons all the time,’ Nef explained. ‘This is the why literally all interventionalists suffer back problems. Brain tumours in the left hemisphere, as well as cataracts, are further problems observed among doctors carrying out this type of treatment, although the radiation exposure is fairly low, owing to modern equipment. All of this will now be a thing of the past.’

The potential is there

Nef sees further potential in using the robotic systems. Some steps, such as the insertion of wires and catheters, still must be carried out by support staff; however, this is a task which the robot could take over. Winneberger agrees. For him, the planning of interventions and the use of artificial intelligence are two important aspects that should also be researched further.

The question remains as to how exactly the angiography system ‘talks’ to the robot. How can such different systems be brought together? ‘This is actually not that simple,’ Winneberger said. ‘We have developed a new angiography system with a universal interface, a so-called third-party broker. In the future, angiography will see the use of many different devices and applications from different manufacturers. The third-party broker can connect all of these systems, including the robot, with one another.’

Does the Corindus takeover mean that Siemens will also manufacture robots? The answer is clear: ‘In the first instance, the production of robots will remain with Corindus. Everyone has their strengths: Corindus in robot-assisted vascular intervention, Siemens in image-guided intervention, so nobody has to reinvent the wheel. We have established close interfaces between the engineers in both companies to set the course for the future,’ the head of Global Marketing for Cardiology explained.

Initially, this future is to see further developments of the existing robot. It is conceivable that it could be controlled from a different hospital: ‘The procedure,’ Winneberger explained, ‘could then take place in a hospital with the doctor who carries out the intervention actually located many miles away,’

David Winneberger is Head of Global Marketing Cardiology at Siemens Healthineers. He has experience in both the industry and hospitals as well as in private practice. His comprehensive experience in medical devices, therapy, communication, management, product management and marketing enables him to motivate and lead teams and aim for and reach ambitious goals.

Professor Holger Nef MD is Assistant Director of the Cardiology and Angiology department at the University Hospital Giessen. He gained his medical degree in Freiburg and then worked in various roles at the Kerckhoff Clinic in Bad Nauheim, a specialist centre for heart, lung, vascular and rheumatic diseases, as well as transplants and rehabilitation. He is a recipient of the Becht-Research Prize, awarded annually by the German Heart Research Foundation for outstanding research in patient-centred cardiovascular research.