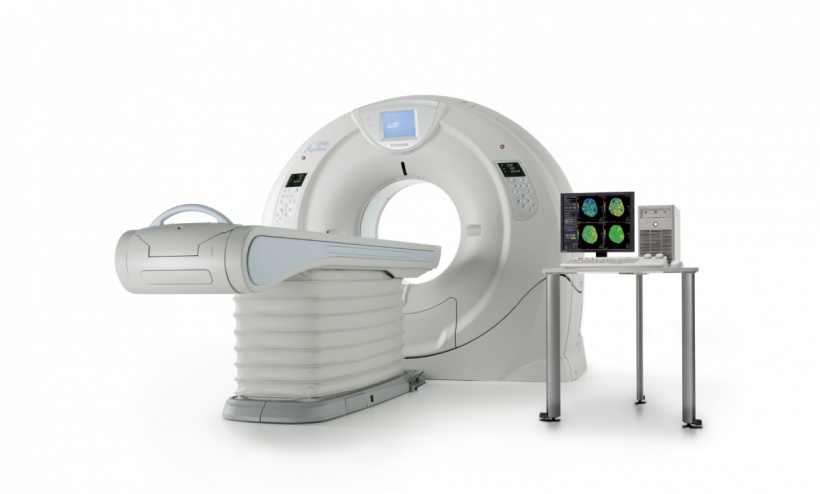 ‘This data is possibly the most powerful I can show about the Aquilion One with the PureVision detector,’ said Russell Bull MD, Consultant Radiologist at the Royal Bournemouth Hospital, Dorset, United Kingdom, where the study data was collected. Over a one-month period at the hospital, an unselected patient population was surveyed. The group included all patients, as well as those with atrial fibrillation and high body mass index.

The radiation dose of around 1mSv for an unselected population is amongst the lowest ever recorded for cardiac CT. ‘I would have been happy with 20% reduction in radiation dose compared to the previous survey,’ Dr Bull said, when presenting the BSCI findings. ‘In fact, there was a 40% reduction in dose. This is extraordinary as the Aquilion One was already a low dose scanner in the previous survey.’

Combined with the wide detector array of 16 cm., this CT scanner enables volumetric scanning, where entire organs can be captured with perfect temporal uniformity and completely free from z-axis misregistration at a rotation speed of 0.275 seconds. As a result Dr Bull said: ‘The image quality is actually much better, which has to do with the combination of the PureVision detector and the AIDR 3-D processing. We are seeing better images for 40% less radiation dose. With Aquilion One we can scan patients we wouldn’t even consider scanning on a conventional scanner.’

With this Toshiba CT scanner time can be added as the fourth dimension paving the way for high-quality dynamic volume applications, or 4D dynamic volume imaging,’ the manufacturer reports. ‘Each individual set of data, acquired in a dynamic volume, shows an exact moment in time, or the exact phase of contrast enhancement.

Dr Bull also added that, the ability to change the table speed on the fly with Variable Helical Pitch (vHP) is unique to Toshiba. This, for example, makes it easier for the technician to do a TAVI scan, because it saves time and contrast dose while reducing the patient’s radiation dose.

In addition, the radiologist noted, ‘We have no problems with patients who are unable to lie flat or have ridiculously high heart rates, or even atrial fibrillation. They can be scanned perfectly, showing coronary arteries at low dose. This really works. We can scan anyone.’

Profile:
Consultant radiologist Russell Bull joined the Royal Bournemouth Hospital in 2000, where a year later the UK’s first Toshiba Aquilion multi-slice CT was installed. The hospital has been the main UK reference site for Toshiba ever since. In 2009, the hospital again became the first in the UK to install the Aquilion One single rotation, single heartbeat cardiac CT scanner. Then, in 2012, a 128 slice Aquilion CxL was installed which also incorporates AIDR 3D technology. Dr Bull initially worked as a general cross sectional radiologist and started a cardiac CT service at Bournemouth in 2004, using a Toshiba Aquilion 16. For the past four years he has worked almost exclusively as a cardiothoracic radiologist, splitting his time between cardiac CT and MRI.

Mobile solutions for the COVID-19 frontline

With public health issues continuing to make daily mainstream news headlines across the world, it is clear how much change the healthcare environment is going through. Not only are there existing…

We are happy and excited to participate in the very first online ECR congress. Although we would have loved to meet you all in person at out booth, we are convinced that this online edition will be a…

Vitrea software is a multi-modality advanced visualization system providing comprehensive applications in a variety of IT environments – from single site to multi-site standardization. Vitrea…