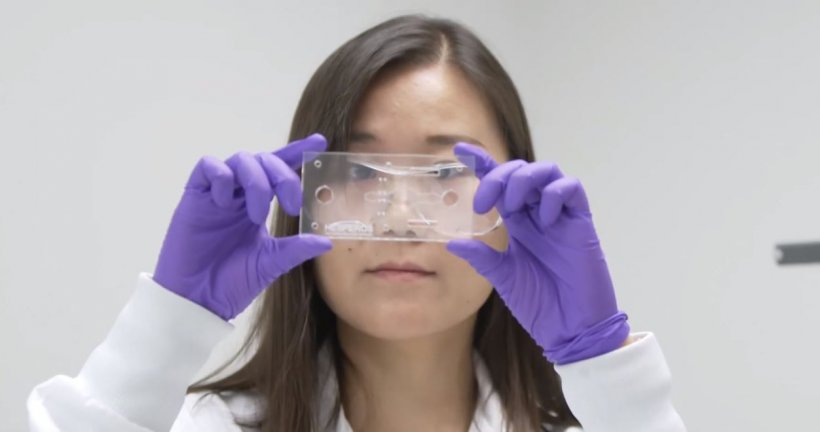 Professor Michael Shuler, who is one of the pioneers of this technology, outlined how it has evolved. Over the past two decades his group at Cornell University in New York has applied chemical reaction engineering principles to biological systems to develop conceptual tools to test hypotheses about cellular mechanisms. This work combines mathematical models of subcellular and cellular mechanisms with models of the whole body as a means to relate the rapidly increasing insight from molecular toxicology and pharmacology with human and animal physiology via body-on-a-chip devices constructed on a microscale using the techniques of nanotechnology. “My work has focused primarily on micro-physiological systems, or body-on-a-chip, where we try to emulate what happens in the body and use it in terms of drug development to determine which drugs may most likely be successful in clinical trials,” said Shuler, who is Professor of Engineering Emeritus at Cornell and CEO & president of Hesperos, Inc. in Orlando, Florida.

The technology integrates multiple analytic steps (such as measuring the time dependent concentrations of drug and metabolites as well as cellular activities) on a single chip with the physiological-based pharmacokinetic models mimicking the integrated responses of organs such as the liver, colon, heart or lung to predict outcomes and reactions of proposed new therapeutical approaches.

Weeding out the drug candidates

The body-on-a-chip technique can also be used for rapid analysis or screening, and while Professor Shuler believes the main application is within pharmacology, the technology can be applied to toxicology and even to determine the safety of cosmetics. Professor Shuler said: “At present, it is generally associated with pharmaceuticals and developing new drugs in clinical trials. A key question is how to decide which drug is best to take into clinical trials. About 10% of drugs in clinical trials are approved as useful. The rest are not, but it still costs a lot of money to go into clinical trials, particularly with those candidates that get to Phase III trials. So, if you could have a device which tells you which drugs in the human body are likely to fail and which are likely to succeed, there could be savings of hundreds of millions of dollars.

“The idea is to divide the body into different organ compartments and use the physiologically based pharmacokinetic model, in conjunction with a physical microscale model with organs represented by living cell constructs, to predict the efficacy of a drug (i.e.: ‘does it work on a critical organ?’) and determine the potential side effects. A whole-body model is needed because many drugs fail due to side effects even if they work on the primary target. The ultimate idea would be to have a system to improve the success rate of drugs in clinical trials.”

He said it is a fast-evolving field with major opportunities to improve the success rate for pharmaceutical companies in clinical trials. Professor Shuler, who was the first to demonstrate the feasibility of such body-on-a-chip systems, explained that while he focussed on the whole body on a chip looking at multiple organ systems and their behaviour, others have developed more specific systems for a single organ-on-a-chip, such as a detailed liver model for liver response, for example. “Our model is a physiological model which predicts what will happen in the human, and is being applied to different diseases – some chronic and rare diseases, although cancer is a big area of application,” he added.

With drug development, the technology can examine complications from drugs and how they may be affected by other medications patients are taking, before they are advanced to the clinical trial stage. “It may be helpful for some chronic diseases where it could take the cells from a body and expand or use them directly to test multiple potential treatments and see which of those treatments work best,” he continued.

While a drug may work well in the majority of the population, there may be a proportion of the population in which they do not, so a clinical trial can be designed to select a subpopulation in which the drug should be tested. “You can also build a system where you have representation of different types of phenotypes, people from different backgrounds and groups and see how the treatments will work,” he added.

Professor Shuler suggests an additional area where the technology may be applied is to support regulatory approval. In the future, he believes a strong application for the technology will be in personalised medicine, rare diseases, and immunological disorders where there are no robust animal models at present. “Having a human-based model is better for predictions than animal models. In some cases, for example for rare disease where there are no animal models, it becomes essential,” said Professor Shuler. “This kind of technology will have a major, or more immediate, impact because there is not a good alternative.”

Michael Shuler is Professor of Engineering Emeritus at Cornell University in New York, having been the Samuel B. Eckert Professor of Chemical Engineering at the Meinig School of Biomedical Engineering. He first joined Cornell in 1974, was Director of Cornell’s Nanobiotechnology Center (2010-2017) and has received numerous teaching, advising, and research related awards. He maintains a funded research program at Cornell, which focuses on applying chemical reaction engineering principles to biological systems, and is CEO of Hesperos Inc. which is based on his body-on-a-chip work.

Towards a clearer view of complex lab results

Identifying a single isolate in minutes

Debuting at the AACC meeting was the first free mobile application to help consumers decipher their own medical tests. Created for use on an iPhone, iPad and Android smartphone, the Lab Tests Online…