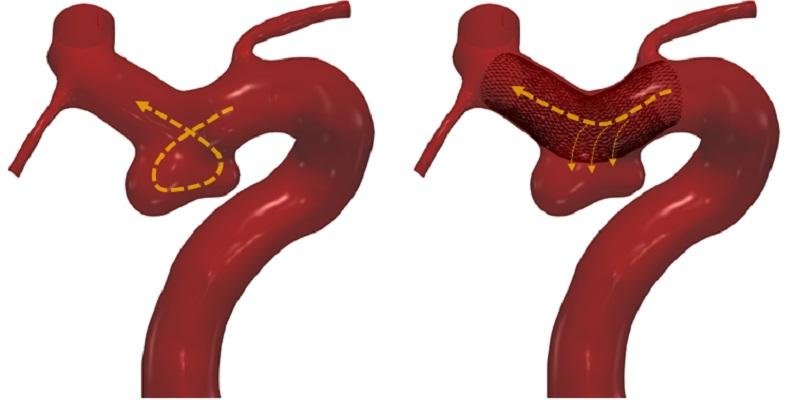 A (virtual) blood vessel with an aneurysm. Left: before the blood diverter is in place, blood flows into the aneurysm. Right: once fitted, the device directs blood away from the aneurysm.

Image source: The University of Leeds

The findings are proof of concept for what are called in-silico trials, where instead of recruiting people to a real-life clinical trial, researchers build digital simulations of patient groups, loosely akin to the way virtual populations are built in The Sims computer game. In-silico trials could revolutionise the way clinical trials are conducted, reducing the time and costs of getting new medical devices and medicines developed, while reducing human and animal harm in testing.

The virtual patient populations are developed from clinical databases to reflect age, sex and ethnicity but they also simulate the way disease affects the human body: for example, the interactions between anatomy, physics, physiology, and blood biochemistry. Those simulations are then used to model the impact of  therapies and interventions. The international research, led by the University of Leeds and reported in the journal Nature Communications, investigated whether an in-silico trial could replicate the results of three real-life clinical trials that assessed the effectiveness of a device called a flow diverter, used in the treatment of brain aneurysms - a disease where the wall of a blood vessel weakens and begins to bulge.

A flow diverter - a small, flexible mesh tube - is guided to the site of the aneurysm by a doctor using a catheter. Once in place, the flow diverter directs blood along the blood vessel and reduces flow into the aneurysm, initiating a clotting process that eventually cuts the aneurysm off from blood circulation, thus healing it. Without successful treatment, the aneurysm can burst, causing a bleed on the brain and a stroke.

To establish their  proof of concept, the researchers had to see if the results from their in-silico study agreed with the results from three previous major clinical trials into the effectiveness of flow diverters. The researchers built a virtual population using real patient data drawn from clinical databases, ensuring that the anonymised virtual patients closely resembled the patients used in real flow diverter clinical trials in terms of age, sex and aneurysm characteristics. The researchers then built a computational model that analysed how the implanted device would affect blood flow in each of the virtual patients. They were able to study different physiological conditions for each patient, such as normal and high blood pressure, and perform analyses on patient sub-groups, such as those with large aneurysms or aneurysms with a branch blood vessel.

The results of the in-silico trial predicted that 82.9% of the virtual patients with normal blood pressure would be successfully treated with a flow diverter. In the traditional clinical trials, the number of people who were successfully treated was 86.8%, 74.8% and 76.8% respectively, showing that the in-silico trial replicated the traditional clinical trials results. Professor Alex Frangi, Diamond Jubilee Chair in Computational Medicine and Royal Academy of Engineering Chair in Emerging Technologies in the School of Computing at the University of Leeds, who supervised the study, said: "The results demonstrate the huge potential of in-silico trials. We have shown that the approach can replicate the findings of traditional clinical trials - and they do that in a fraction of the time it normally takes, and at a fraction of the cost."

In the in-silico trial, the researchers were also able to adapt their computational model to investigate emerging scientific findings. By modelling the physics of blood flow and the biochemistry of blood clotting in aneurysms under different physiological conditions, they were able to identify sub-groups of patients at higher risk of stroke, with patients with large complex-shaped aneurysms at higher risk of a haemorrhagic stroke and patients with hypertension at higher risk of ischaemic stroke (a stroke caused by a blood clot). Being able to rigorously analyse medical device performance in this way will allow biomedical engineers to optimise the design of the device and reduce the risks associated with treatment.

Dr Ali Sarrami-Foroushani, Research Fellow in the School of Computing at the University of Leeds and lead author in the study,  said: "In-silico trials offer an opportunity to do virtual experiments that could explain concepts that are difficult to study in conventional clinical trials. The current approach to improve our understanding of new medical devices is slow, as conventional trials can easily take five to eight years, from their design to completion. In-silico trials could reduce this period to less than six months in some circumstances, making knowledge and therapeutic technologies safer and more promptly available to clinicians and patients.”

Older adults with mild cognitive impairment (MCI), often a precursor to Alzheimer’s, showed significant improvement with certain complex thinking and memory skills after exergaming, according to a…