Older adults with mild cognitive impairment (MCI), often a precursor to Alzheimer’s, showed significant improvement with certain complex thinking and memory skills after exergaming, according to a new study. The results could encourage seniors, caregivers and health care providers to pursue or prescribe exergames (video games that also require physical exercise) in hopes of slowing the debilitating effects of those with MCI, sometimes a stage between normal brain aging and dementia. “It’s promising data,” said Cay Anderson-Hanley, associate professor of psychology at Union College and the study’s lead author. “Exergaming is one more thing that could be added to the arsenal of tools to fight back against this cruel disease.” The study appears in the current issue of Frontiers in Aging Neuroscience. 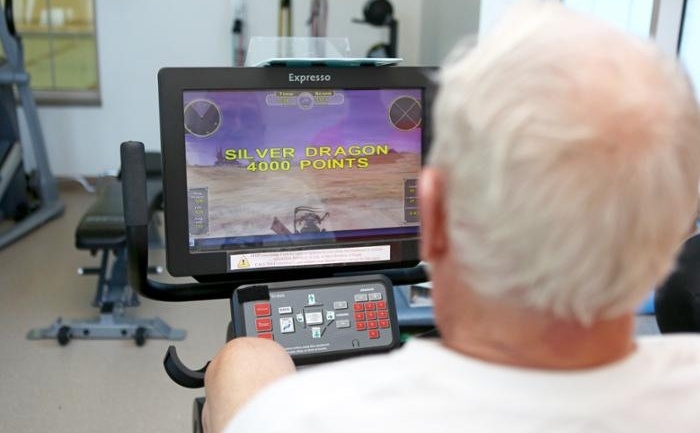 Chasing dragons and improving your memory at the same time? Exergaming might make it happen.
Source: Union College

Previously published research by Anderson-Hanley and others found that seniors who exercise using the features of interactive video games experienced greater cognitive health benefits than those who rely on traditional exercise alone. For the latest study, researchers wanted to target older adults diagnosed with or at risk for MCI. MCI is most common in people over age 55. By age 65, approximately 15 to 20 percent of the population shows signs of MCI, according to the Alzheimer’s Association. Researchers initially enrolled more than 100 seniors for the study, which was funded through a grant from the National Institute on Aging. Over six months, 14 (evenly split between men and women) persisted with regular exergaming. The average age was 78.

The first group of seven was assigned to pedal along a scenic virtual reality bike path several times a week. The second group was given a more challenging task for the brain: pedal while playing a video game that included chasing dragons and collecting coins. The special bikes were placed at a number of sites, including hospitals, community centers and independent living centers. The results were compared against data collected from a separate group of eight seniors who played video games on a laptop but did not pedal, and also a group from the previous research who only rode a traditional stationary bike with no gaming component.

The results suggest that the best outcome for brain health may result when we do both: move it and use it

At the end of the randomized clinical trial, participants in both the group that pedaled along a virtual bike path and those that chased dragons and collected coins experienced significantly better executive function, which controls, in part, multi-tasking and decision making. “Executive function is like the CEO of the brain. It is key to remaining independent in later life,” said Anderson-Hanley. “For example, it allows you to cook two things on the stove at once. It makes sure you don’t forget that you are boiling water while also having something in the oven.” Benefits for both groups were also seen for verbal memory and physical function, suggesting it may be worth the effort for seniors to incorporate exergaming into a daily exercise regime.

Anderson-Hanley acknowledged that further research with a larger sample size is needed to confirm the team’s findings. One of the challenges faced was getting older adults in the habit of going to the gym or another venue to exergame. The team is working on a way to have seniors stay home and upload a video game to an iPad that can be used with a stationary bike. In the meantime, the research suggests benefits of exercising while also stimulating the brain with some mental challenge, such as navigating a scenic bike path or interactively playing a video game. “The goal is to explore even more effective ways to prevent or ameliorate cognitive decline in older adults by tailoring accessibility and level of mental engagement in interactive cognitive and physical exercise,” she said. “The results suggest that the best outcome for brain health may result when we do both: move it and use it.”

Low levels of alcohol might actually be good for your brain

While a couple of glasses of wine can help clear the mind after a busy day, new research shows that it may actually help clean the mind as well. The new study, which appears in the journal Scientific…

To fend off dementia, take care of the thyroid

Older people with hypothyroidism, also called underactive thyroid, may be at increased risk of developing dementia.