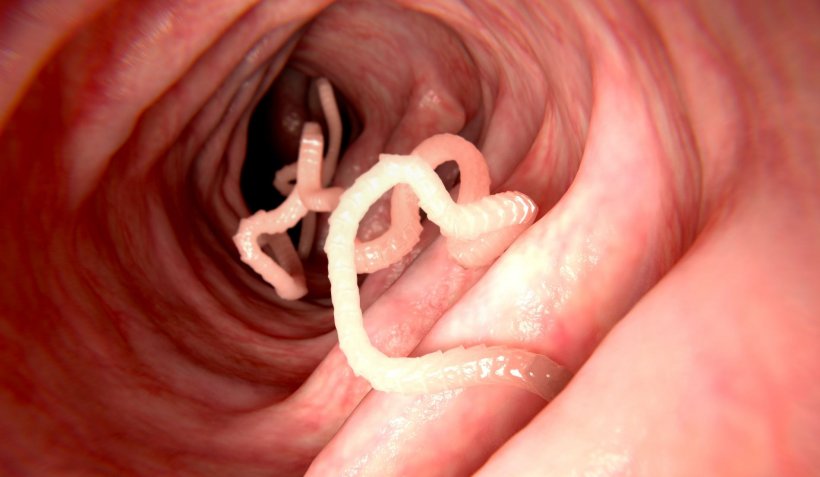 Niclosamid is designed for use against tapeworm infestations, but it might also be effective in patients infected by the coronavirus SARS-CoV-2

According to their report in Nature Communications, the researchers were able to identify four substances which inhibit SARS-CoV-2 replication in the host cell: spermine and spermidine, substances naturally found in the body; MK-2206, an experimental cancer drug; and niclosamide, a tapeworm drug. Charité is currently conducting a trial to determine whether niclosamide is also effective against Covid-19 in humans.

Viral replication depends on host cell machinery and the use of the host’s molecular building blocks. In order to avoid detection by the immune system, viruses also have to ensure that they can evade cellular surveillance systems. To do this, they manipulate various processes in the infected host cell – and every virus pursues a different strategy. This is why a team of researchers led by PD Dr. Marcel Müller of the Institute of Virology and Dr. Nils Gassen of the UKB’s Psychiatry and Psychotherapy Clinic and Outpatient Clinic have investigated the way in which SARS-CoV-2 reprograms host cells for its own benefit. Their key finding was as follows: The new coronavirus slows down the cell’s own recycling mechanism, a process known as autophagy. The purpose of this ‘auto-digestion’ mechanism is to enable the cell to dispose of damaged cell materials and waste products while recycling usable molecular building blocks for incorporation into new cellular structures.

“In our study, we were able to show that at the same time as using the cell’s building blocks for its own benefit, SARS-CoV-2 deceives the cell by simulating a nutrient-rich status, thereby slowing cellular recycling,” explains first author Dr. Gassen. As part of this work, the researchers undertook a detailed analysis of SARS-CoV-2 infected cells and the lung tissue of Covid-19 patients, studying cellular metabolism and the processing of molecular signals. “It is likely that SARS-CoV-2 uses this to avoid dismantling by the cell. After all, viruses are also subject to autophagic disposal,” adds the study’s last author, DZIF researcher PD Dr. Müller. He adds: “The same reprogramming strategy is also used by the MERS coronavirus, whose autophagy-inhibiting action we were able to demonstrate more than a year ago. However, there are other coronaviruses which, quite in contrast to this, induce autophagy. These mainly infect animals.”

When results from the study suggested that the recycling mechanism might be a potential target for Covid-19 therapy, the researchers tested whether substances which induce cellular recycling also reduce the replication of SARS-CoV-2 inside infected cells. Interestingly, the researchers found four substances which proved effective – all of them already in use in humans. These included the polyamine spermidine, an autophagy-enhancing metabolite which is produced in all human cells and by bacteria in the human gut. It occurs naturally in foods such as wheat germ, soya, mushrooms, and mature cheese and is freely available as a food supplement. When the researchers added spermidine to cells infected with SARS-CoV-2, this resulted in an 85 percent reduction in the numbers of virus particles produced. Similar results were produced by spermine, another polyamine which occurs naturally in the body. This derivative of spermidine was found to reduce viral replication by more than 90 percent in human lung cells and in a human gut model comprising clusters of cells known as ‘organoids’.

One of the main features of colorectal cancer is that there are considerable differences between the tumors of individual patients - at genetic level and hence in terms of the response to treatment too. Researchers from the German Cancer Consortium (DKTK) have developed a method that allows these differences to be identified more effectively.

“The obvious effects produced by spermidine and, in particular, spermine are certainly encouraging. For one thing, substances which occur naturally in the body are less likely to induce side effects,” says PD Dr. Müller. “Having said that, we worked with pure forms of these substances which are not suitable for medical use. Spermidine, in particular, has to be used at relatively high concentrations to achieve an appreciable effect in cell culture. Many questions therefore remain to be answered before we can consider polyamines as a potential treatment against Covid-19: When used in the body, will it be possible to achieve blood levels high enough to inhibit viral replication in the respiratory tract? And, if yes: would administration before or during the infection be advisable? Are there any side effects? Even so, our findings from cell culture are a good starting point for research involving animal models. Self-medication is not advisable, one of the reasons being that viruses also use polyamines to help boost replication; the correct dosage is therefore crucial. The same applies to fasting, which can stimulate the body’s autophagy process. Given that the body needs energy to mount an immune response, it remains unclear whether fasting is advisable in SARS-CoV-2 infected patients.”

Based on our data, I would consider MK-2206 as an interesting treatment candidate against Covid-19 which, after a careful analysis of risks and benefits, would justify further study in clinical trials

The third substance to prove effective against SARS-CoV-2 was the ‘AKT inhibitor’ MK-2206. The substance is currently at the clinical trial stage and undergoing testing for its tolerability and efficacy against a range of different cancers. In the current study, MK-2206 reduced the production of infectious SARS-CoV-2 virus by approximately 90%. It did so at plasma concentrations which had already been achieved during a previous study. “Based on our data, I would consider MK-2206 as an interesting treatment candidate against Covid-19 which, after a careful analysis of risks and benefits, would justify further study in clinical trials,” explains PD Dr. Müller.

The most pronounced antiviral effect was associated with niclosamide, which the researchers had shown to be effective against the MERS coronavirus during an earlier study. The tapeworm drug was found to reduce the production of infectious SARS-CoV-2 particles by more than 99 percent. “Niclosamide showed the strongest effect in our cell culture-based experiments. What is more, it has been licensed for use against tapeworm infections in humans for a very long time and is well tolerated at potentially relevant doses,” says PD Dr. Müller. He adds: “Out of the four new candidate substances, we consider it to be the most promising one. This is why we are now conducting a clinical trial at Charité to test whether niclosamide might also have a positive effect on people with Covid-19. I am delighted at this development. It shows how quickly findings from basic research can reach patients if research and clinical practice are closely interlinked and work together in an efficient manner.”

Double vaccination cuts risk of Long Covid in half

Adults who have received a double vaccination are 49% less likely to have Long Covid should they contract a Covid-19 infection, according to new research from King's College London. The scientists…

When a cell is infected, SARS-CoV-2 not only causes the host cell to produce new virus particles. The virus also suppresses host cell defence mechanisms. The virus protein nsP3 plays a central role…