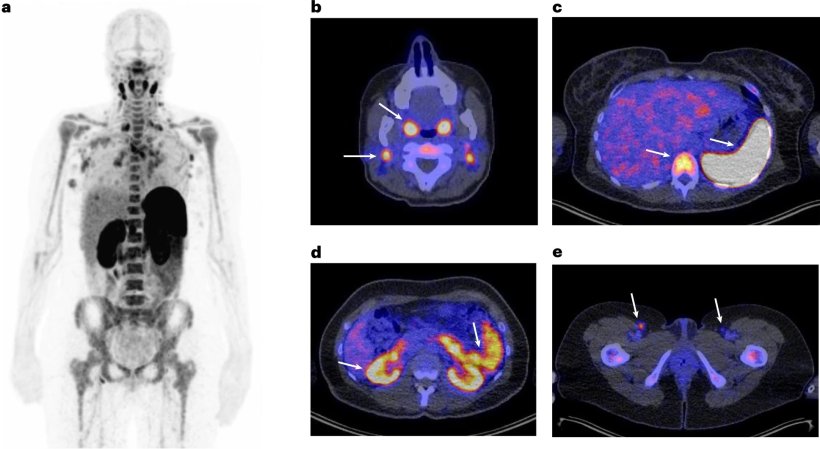 Scientists at the University Medical Center Groningen have performed whole-body PET scans using a radioactively labeled antibody tracer against immune cells, namely CD8+ T-cells, before and thirty days after the start of treatment with immune checkpoint inhibitors. After proving that the tracer binds to CD8+ T cells, the scientists showed that CD8+ T cell presence is both heterogeneous and dynamic. Insight into these dynamics might affect future treatment decisions. The results are published in Nature Medicine.

Our immune system evolved to clear away intruders like micro-organisms, but also cells that have changed beyond recognition. It can therefore attack tumor cells, but these have ways to silence T-cells that infiltrate the tumors. The discovery of pathways to remove this immune suppression has been an important breakthrough in cancer treatment. "Immune checkpoint inhibitors release the full power of T-cells on tumors," says Liesbeth de Vries, professor of Medical Oncology at the University Medical Center Groningen. However, the response of patients to this treatment is variable. De Vries says, "We would like to know early on which patients do not respond and maybe need some additional activation of their immune system."

To this end, she and a team of scientists from the Departments of Medical Oncology, Clinical Pharmacy and Pharmacology, Pathology and Medical Biology, and Medical Imaging Center of the University Medical Center Groningen, the Department of Epidemiology, Julius Center for Health Sciences, University Medical Center Utrecht, and scientists at Genentech, San Francisco, with Laura Kist de Ruijter as the first author, used whole body PET scans with a hemi-antibody (half of an antibody structure) directed against CD8+, a marker of activated T-cells, and labeled with zirconium-89.

We were stunned by the heterogeneity in response we saw, both within individual patients and between patients

Scans were made before and thirty days after the start of treatment. "Activated T-cells are everywhere in the entire body, but so far, our knowledge about their distribution was largely based on biopsies. We wanted to study the full picture," says de Vries. They collected tumor biopsies from their patients to confirm the accuracy of the PET scan results. "We compared the amount of radioactivity in the biopsies measured by autoradiography with staining for CD8+ cells. And we found higher tracer uptake in lesions with high CD8+ infiltration," notes de Vries. The observations show that tracer uptake is a good measure of immune activation. This result gave the scientists confidence to analyze the whole body scans. The upfront presence of CD8+ cells predicted the outcome for the patient. Findings during treatment were striking. "We were stunned by the heterogeneity in response we saw, both within individual patients and between patients," De Vries says.

Their study is the first to investigate this response in the entire body of patients treated with immune checkpoint inhibitors, but the outcome is complicated. De Vries states, "It was generally assumed that around 30 days of treatment there would be a clear-cut difference between responders and non-responders in CD8+ T-cell presence, but that was not the case. The response is much more dynamic, with a large spatial and temporal variation in the presence in tumor lesions of activated T cells."

This insight is important, as it becomes clear that immune checkpoint inhibitors can be effective in an increasing number of cancer types. "The field is rather overwhelming. These drugs are now being used not just as a last resort, but also evaluated to prevent metastasis or to reduce tumor size before an operation," says de Vries. Moreover, it can be considered to add other medicines to improve effects. Since this comes at the price of more side effects, more information about which patients will respond to immune checkpoint inhibitors is warranted.

A novel imaging agent can reduce the number of false-positive PET/CT findings among cancer patients recently vaccinated for Covid-19. This may mitigate the issue of tracer uptake in lymph nodes…

99mTc-Sestamibi SPECT/CT can aid in the diagnosis of solid renal lesions, especially in cases where contrast enhanced CT findings are inconclusive, according to researchers from the Mallinckrodt…