Vascular problems are a huge and fast-growing problem, because of the numbers of people with Type 2 diabetics, the most common form of the disease, which is related to overweight, lack of exercise, ageing and more. If vascular occlusive disease develops, blood flow is reduced, particularly to the lower limb. Then, Dr Reekers explained, there is minimal blood flow to the foot, making it very vulnerable to small skin defects, ulcers and abscesses that can result in big problems. ‘Most diabetics can also have another problem: neuropathy. With neuropathic disease your nerves die and you lose sensitivity; they have no feeling around the foot. So, if they have a little wound, or ulcer, they don’t feel it. Then the wound grows very rapidly, and you need a good blood supply to heal it. But, many with vascular disease don’t have enough bloodflow to heal that wound. Then they get an infection and then most of these patients end up with an amputation. And this can go very rapidly from an ulcer to an infection to an amputation; it can be within one or two weeks. That’s because the diabetic doesn’t feel much, and comes in late with severe problems.’

In the past, the therapy involved two things, Dr Reekers explained: ‘First, amputation (thousands upon thousands of diabetics have amputations every year); then there was revascularisation, to see to it that more blood goes down to the foot. This used to be done by vascular surgeons, who performed bypass surgery. That’s really major surgery and has average but not brilliant results. It is done in old patients with a lot of co-morbidity, and patients also have several other diseases, so the mortality from surgery is quite high. It’s an invasive operation with a dubious outcome; it is potentially dangerous to the patient.

What are today’s options?
‘We are interventional radiologists, trained to do minimally invasive vascular procedures, and we do percutaneous – that is, little more than a puncture in the groin and no more – revascularisation of occluded vessels. Instead of making a bypass, we re-open one or two vessels down to the foot. First, we do a diagnostic investigation like Ultrasound, CTA or MRI to see where the problem is. Then we do angiography, and then the revascularisation. The standard word for that is PTA, which means percutaneous transluminal angioplasty. The whole thing is, we revascularise the vessels down to the foot. The outcome – and there is quite a lot of science in this, good science – for the patient is as good as doing bypass surgery, but the big advantage is that it is minimally invasive, so you don’t need an anaesthesiologist and only a very short hospital admission. You can even do this in day care; it’s a very low risk procedure, so there’s hardly any morbidity and hardly any mortality. On top of this, PTA is still much cheaper than surgery. There are good trials now, which show that, if you do a minimally invasive procedure, as is done by an interventional radiologist, the outcome for the patient is equal to doing major surgery, such as bypass surgery.’

‘Revascularisation, the way interventional radiologists do it, is safer, cheaper, quicker and there’s quite a lot of consensus, also in the surgical community, that we should always try a percutaneous procedure first. The reason why we did not do that for many years is because we didn’t have the technology; in the last seven years the materials we need to do this improved dramatically. Balloon catheters were much better, much smaller, the wires much better, so we had a huge technology improvement, which made it possible for us to work very low in the lower limb region, going all the way to the foot. We couldn’t do that ten years ago because the devices we had were still too bulky. The problem is that not many people know that these kind of minimally invasive surgeries are equal to surgery and, as I said, cheaper and safer and much more patient-friendly. So that is my message at the ECR: Interventional radiologists can now really, really have and play an important role in the treatment of diabetic patients with diabetic ulcers based on vascular disease.’

How widespread is the use of PTA, and is special training needed for this procedure?
‘If you are a trained interventional radiologist, and we have a great many in Europe, you can do it. You don’t have to attend a special course because it’s just an extension of the techniques we used in the past. Due to the real development and improvement in the materials, and because people began to ask for it, PTA has developed to become a common method. Nowadays, most hospitals that provide interventional services may also have this to offer.
Are there factors that would exclude patients from this radiological treatment?
‘That’s the difference. In surgery, there are lots of contra-indications, for example, if a patient is too old, or has a cardiac problem, or if there is a contra-indication to anaesthesiology. In this minimally invasive procedure the patient does not need to be anaesthetised. Even an octogenarian or someone a 100 years old can still be done. For this treatment, there is no restriction at all.

Is this something similar to restenosis used in cardiology?
‘This is very, very important and interesting. There is of course a level of restenosis, but that is not the important issue. The problem that threatens a patient is the non-healing ulcer, as I said, which ends up with amputation. So the important thing is to heal the ulcer, and for that you need two things: enough blood going down to the foot, and the second thing is time. If you are able to improve the blood flow, let’s say for about three months, you will always see that the wound or ulcer will heal. When the ulcer is healed, and if then the revascularisation occludes by intimal hyperplasia, it is not an important issue, because we have achieved our goal – ulcer healing. So it’s not long-term patency; it’s not long-term durability; it’s ulcer healing. In our world, we call what we do a temporary bypass, with special emphasis on the word temporary.

‘The diabetes goes on, but that’s another thing, and not part of the interventional radiologists’ work. That is part of the diabetologists’ work, which is prevention of ulcers. If we can heal the ulcer, their task is to treat and educate the patient in a way that he will not have another ulcer again, because you get ulcers from wearing the wrong shoes, or walking without shoes on, or from little domestic accidents. So he will train the patient through an ulcer prevention programme. But first, when there is an ulcer, it should be healed. So, our task is to employ minimally invasive endovascular techniques to heal the ulcer. But, as I said, it is so new, because seven or eight years ago we were not involved; this was only a surgical area, and now it is becoming an area for minimally invasive treatment by interventional radiologists.

Along with paediatric radiology, interventional radiology will have a high profile at the 89th German Radiology Congress and 5th Joint Congress with the Austrian Radiology Society. Congress…

Embolisation – the blocking of vessels - is a key procedure in Interventional Radiology. It plays a steadily growing role in the treatment of various tumour lesions, with hepatic cellular carcinoma…

No white lab coats anywhere; instead men in hard hats, equipped with hammers and drills. The Düsseldorf University Hospital’s Cardiology Pneumology and Angiology Clinic is a construction site, but… 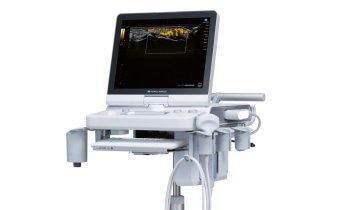