Ziehm Imaging, he emphasises, has just one focus: the development and production of C-arms. ‘It’s what sets us apart. Our customers really appreciate the fact that C-arms are our business; we make no compromises; we have to do it right. We don’t combine; we don’t share resources to do something totally different.’

In 2007, Ziehm Imaging began its move into the flat-panel market, because ‘It’s the higher, better technology,’ explains Timo Ihamäki. ‘You can store images even with image intensifiers, but they are big, bulky and there’s no foreseeable major development anymore. Flat-panel technology is evolving. It offers a better image because there’s a higher dynamic range, meaning you can see bone but, in the same image, you can still see the soft tissue -- with image intensifiers this may be difficult. It’s smaller, so it’s easier to position. It makes the procedure simpler. Image intensifiers detect the earth’s magnetic field for example, and there’s always distortion. A little bit, not much, but it’s there.

‘Also, if your image is square it’s never a perfect square. It’s not a huge amount of distortion, but it’s there. With flat-panels you don’t have to care about those things. Image intensifiers also have a lifetime, you sort of burn through them and then have to switch them -- and that’s expensive. With flat-panels there’s no known process that, just by exposing them with a lot of patients, can destroy them. However, it’s still relatively young technology, so there’s no long term experience as there is with image intensifiers.’

Ziehm Imaging’s competitors in the C-arm market include GE, Siemens, Philips, Shimadzu and Hitachi, depending, he points out, on the country, the application and the procedure. ‘We’re talking about low end or high end. If we talk about the low end, in Asia you have all the Chinese and Italian manufacturers – and there are many.’
Flat-panel technology offers many advantages, he says, although still more expensive than image intensifiers, but the price gap, he points out, is shrinking.

Whether in private or public hospitals, the main users of the Ziehm Imaging equipment are surgeons and radiologists, which interestingly depends on the healthcare systems in their countries. Timo Ihamäki’s sales responsibility lies in Northern Europe -- Scandinavia, Benelux countries, UK, Ireland. He explains that, for example in the Netherlands, all the firm’s C-arms are sold to radiology departments. ‘They own the equipment; they control it. But, in Norway, it’s the surgeons. If they want something, they buy it. My dealer there says he doesn’t even remember the last time he spoke to a radiologist. The surgeons call the shots. However, in Sweden it’s mixed.’

Radiation levels are inevitably a factor. ‘You have to follow the Alara principle – as low as reasonably achievable,’ he points out. However, whilst in the Netherlands rules are strict, across the border in Belgium it is ‘very liberal’, he adds. ‘Every surgeon has their own C-arm in the hallway, so Belgium is a good market for us -- as well as Holland, but very different.’

To date, Ziehm Imaging has four mobile C-arm models with flat-panel technology – including the new generation Vision RFD launched this year for hybrid theatres. Philips has one mobile C-arm. Siemens and GE have none. ‘I’m sure all the companies are developing something, but we have more models and more experience.’

Since the firm’s first unit was launched 2007 Ziehm Imaging has banked valuable experience. ‘You can develop one, make it work in the lab and bring it to the customer, but then how does it behave? Making hundreds work is a different story. We’ve now shipped about 300 units with flat-panels; 30% of our shipments are with-flat panels, so we’re a clear market leader there, because we have the experience and have crossed the critical points. People are now asking for it.’
One reason for this, he explains, is that: ‘You can do the same things with the flat-panel, but more precisely because there’s no distortion. In 3-D imaging, for example, if you use the image intensifier, distortion is always there and will always affect the end result – how much is arguable -- but you have to keep it in mind. With the flat-panel that one major source of error is gone.’

Couldn’t distortion be corrected by software, as with MRI? ‘You could do it but it wouldn’t be worth it. You bring some of the magnetic or paramagnetic next to it – that’s another story again. It would be too complicated because MRI units are fixed.’

About a third of all C-arms sold by Ziehm Imaging are digital. ‘It’s growing more and more, especially now with our latest model, the Ziehm Vision RFD hybrid edition. It’s like a hybrid operating theatre with different disciplines working together. Typically, you have a fixed system there, but what does hybrid theatre really mean? There are so many definitions for that buzzword, but basically it’s about bringing different people and equipment together. That’s what the RFD hybrid edition is targeted towards – it’s meant to directly replace or compete with the fixed C-arms that you need in hybrid theatres, because it’s powerful and you can do the same applications – and it’s less expensive.’

Think about a hybrid room, he suggests. It has to be much larger than a standard operating theatre and thus presents more expense and more physical work for nurses to clean -- an investment in itself for a hospital, he adds. ‘In a hospital in Germany the nurses said they hated having to clean this room. It’s big and the equipment is fixed there. With the mobile C-arm you can do the same thing in a smaller place and, if you don’t need it, take it out. If it’s wanted somewhere else, take it there and then you have your hybrid room there.’

The mobile C-arm is also automated for interventions. Using the SmartVascular button, the first image and landmarks are obtained and a signal is transmitted to the injector system to inject the contrast media. A cineloop is taken and, automatically, the DSA (Digital Subtraction Angiography).’

Recently, when a leading vascular surgeon saw this system, he said “I want that”, because, Timo Ihamäki says, it can do the same things as a fixed system, in less space and with less money. ‘When word got around that he’s getting one, vascular surgeons at two other hospitals wanted it as well. A group of our customers are also really keen. Hospitals that know their fixed system is going to break down don’t want to make the same investment, so they buy a mobile C-arm to do the same thing, for less money.

‘The “big boys” have the same technology, but they also have the fixed system and maybe don’t want to promote mobile C-arms. We don’t have that problem; we’re free to do it. We’re dedicated. We are C-arms; that’s what we eat and breathe. We have to do it right.’
That is what Ziehm Imaging has done since 1972, he points out, adding that when the firm was bought by Instrumentarium in 1998-’99, the buyer had a C-arm called Omega C, which was ditched ‘because Ziehm had a much better product’.

Later, GE bought Instrumentarium and Ziehm Imaging was sold. Today the firm is privately owned and independent and, he adds, ‘We’re really targeting the advanced applications. The customer who wanted the Ziehm Vision RFD hybrid edition, he only undertakes the difficult procedures in his internationally known hospital. If he says that a mobile C-arm can do the advanced applications, it’s a clear sign we’re on the right track. This is the way to go.’

Presentations and trials for hospitals

Ziehm Imaging dealers can give a presentation of the mobile C-arm, and when a hospital shows interest a C-arm can be delivered there, demonstrated and left for staff use for a week or two. ‘That makes the C-arm business a little more complicated. You have to handle a lot of logistics. But customers want to work with the real equipment,’ Timo Ihamäki explains. ‘Then he shows the green light.’

Sponsored • Flexibility and freedom of movement 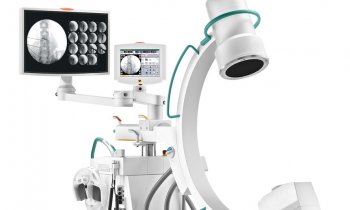 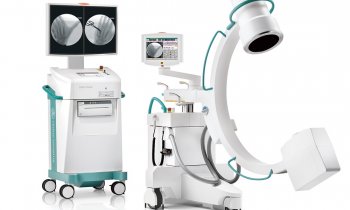 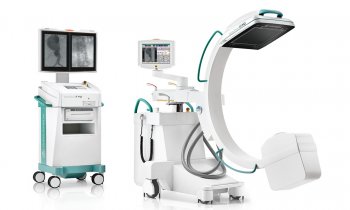