While Dr Pruvo is lobbying the government in Paris to buy MRIs, on a hill overlooking the capital at the Gustave Roussy Institute for Cancer, Dr Clarisse Dromain has developed a next-generation examination based on X-rays -- a more readily accessible technology for hundreds of thousands of women awaiting diagnoses.
Initially, Dr Dromain turned to a modified full-field digital mammography system to capture numeric data sets, rather than fixed film images, as the data can be processed by software to enhance contrast and improve visibility.
Key to the breakthrough is a high-performance scanner re-engineered by GE Healthcare with an innovative capability called Contrast Enhanced Spectral Mammography that separates the X-ray energy spectrum to reveal a new level of functional data, specifically the growth of new blood vessels feeding a tumour.
To highlight this vascular activity in a breast with a suspicious mass, Dr Dromain injects a standard iodine-based contrast agent.

The benefit of this new method, called Contrast Enhanced Spectral Mammography (CESM), reaches far beyond France, offering a faster and more affordable alternative to MRI breast examinations worldwide.
‘The clinical evaluations of this technology are very promising,’ said Dr. Dromain, who presented results from exams with 120 patients at the congress of the European Society of Radiology.
In an interview reviewing her findings, Dr Dromain explained that the potential for CESM ‘...is to eliminate, in many cases, a need for further MRI examinations’.

A CESM exam takes from five to 10 minutes, compared to 40 minutes on an MRI scanner, and it is a fraction of the cost, she said, adding that, in the majority of cases, confidence in the diagnosis is high enough that a patient can be told the results the same day. ‘In my own examinations of patients I’ve been able to see the spread of a cancer perfectly well with CESM, and follow-up exams with an MRI validated exactly the same indications,’ Dr Dromain said. Indications for CESM, she pointed out, are similar to indications requiring a breast MRI scan and CESM presents a potential to better characterise tumours where a combined mammography and ultrasound exam is inconclusive.

This new technique may prove to be most useful in routine clinical practice for the staging of cancers and the selection of patients for biopsy, she said.
Other potential clinical applications for CESM include monitoring breast cancer recurrence, verifying any response to anti-angiogenesis therapies, and localising catheter-based wires use for breast biopsies, because MRI-guided procedures remain difficult and very time-consuming, she explained.
For routine practice, CESM offers many advantages, being immediately available, without special scheduling of patients and it is well-accepted by patients happy to be diagnosed sooner. No special training of staff is required, because patient positioning and image acquisition are similar to a conventional mammogram, Dr Dromain concluded.

CESM is not intended as a screening modality representing a new capability that moves the widely accepted X-ray modality from the front-end of the patient pathway to a higher level of diagnosis in the clinical setting.
More than the combination of contrast enhancement with digital mammography, the innovation in CESM centres on the capability for spectral imaging integrated into GE Healthcare’s Senographe Full Field Digital Mammography system.

Picture the difference between a digital photo of a house and an infrared image of the same house that reveals the functional information of heat loss. The vessels in a tumour are not the same as normal blood vessels, and the contrast media rapidly leaks from the tumoural vessels, which is what is seen on the image, Dr Dromain explained.

Multiple image acquisition is the second significant modification of the CESM system, as it acquires images at different X-ray energy levels rather than the single view in traditional mammography.
One image acquired in the conventional mammography range of 26 to 32 kilovolt peak (kVp) provides morphological information describing the physical structures. One second later subsequent data is acquired using voltages in the 45 to 49 kVp range, capturing the diffusion of a contrast agent within the breast and revealing functional information.

These data sets are then combined, using a proprietary algorithm in the GE image processing platform with advanced features and high-performance viewing tools, to create a single recombined image for analysis.
‘There is a direct correlation between the recombined CESM image and a conventional mammogram, so it is very easy to compare and analyse, not only for radiologists but also for oncologists and surgeons,’ Dr Dromain pointed out. (See images for a comparison).

Hardware modifications to the scanner for the clinical investigation developed in partnership with GE include a rhodium filter to optimise image quality, which has now been integrated into the Senographe system at the Gustave Roussy Institute, and a specially modified filter to shape the high-energy X-ray spectrum to maximise sensitivity for the low concentration of the contrast agent.
Contrast enhancement introduces the essential technique distinguishing CESM from traditional mammography as an iodinated agent carried by the blood illuminates vascular function. ‘The contrast media accumulates, allowing us to see, and then to characterise the tumour pathologically,’ she said, ‘which is why we can consider the contrast media a marker for tumoural angiogenesis.”
Once a tumour reaches two millimetres in size, she explained, it needs its own blood supply to grow, ‘so tumoural angiogenesis not only tells us the nature of the tumour but also indicates the probability it will grow and metastasise’.

For a CESM exam, a woman with a breast abnormality suspected to be a cancer receives the contrast agent intravenously and waits two minutes as the solution diffuses throughout her body. After injection, her breasts are compressed in during the (as usual) uncomfortable mammography, and the spectral mammography images are acquired.
The total radiation exposure for the woman corresponds to a dose 1.2 times greater than a digital screening exam, ‘which, on our system, is already well below the dosage recommendation for screening,’ Dr Dromain added. The total duration of the exam is five to 10 minutes depending on whether the doctor wants to image one or both breasts.

‘To this point we have demonstrated the technique works, and now we need to establish the place of CESM in radiology. CESM,’ she said, ‘could well be the technology of the future.’
Dr Dromain foresees that regulatory approval based on clinical investigation at the Gustave Roussy Institute ‘…will open the possibility for other centres to gain experience and develop the techniques, such as exploring potentials of the contrast media, or even experiences CESM with 3-D with tomosynthesis’.

The limitations of mammography are well documented, yet it is still the gold standard in breast cancer detection - particularly due to the positive cost-benefit ratio. Due to prohibitive costs, MRI… 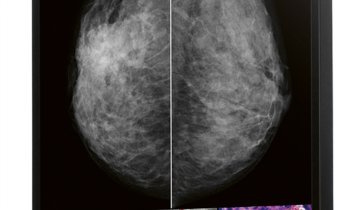 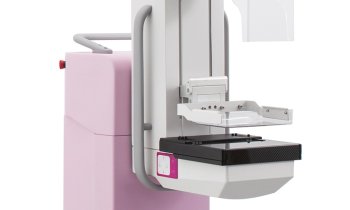 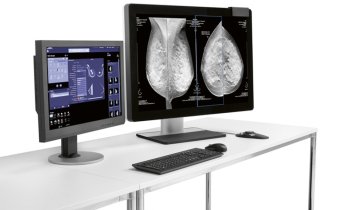