By 1914 Marie Curie had twice won the Nobel Prize and on the day in August that France declared war on Germany, she was celebrating the opening of the newly constructed Radium Institute on a Paris street named for her late husband, Rue Pierre-Curie.

The outbreak of the Great War immediately emptied the Institute as her male colleagues were mobilized. "The dominant duty imposed on everyone at that time was to help the country in whatever way possible during the extreme crisis that it faced," she wrote in the book Radiology in War published in 1919. "No general instructions to this were given to the members of the University. It was left to each to take his own initiative and means of action."

Madame Curie saw a duty she could perform in bringing the recently discovered benefits of x-ray to surgeons to find bullets and shrapnel as well as broken bones. In a first effort she led an drive to create new x-ray installations and train personnel in hospitals. These facilities were quickly overwhelmed by the slaughter on the battlefield, what German author and twice wounded soldier Ernst Jünger called the "Storm Of Steel" raining down from new machine guns and unimaginable artillery bombardments.

"During the rapid succession of events in August 1914, it was clearly proved that . . . grave failings appeared in the organization of the Health Service," wrote Madame Curie. The French public was shocked by accounts of so many lives lost in the effort to transport the wounded to distant hospitals. "My own attention was particularly drawn to this situation, and I soon found a field of activity which, once entered upon, absorbed the greatest part of my time and efforts until the end of the war, and even for some time thereafter," she wrote.

Calling upon supporters and benefactors, by October, 2014 Madame Curie outfitted two trucks to bring x-ray apparatus to field hospitals, powering the dynamo with the truck's engine. Rolling over the objections of the French military authorities she set out on the first of November for a hospital near Creil, 30 kilometers behind the front line fighting.

It is widely credited as the first use of x-ray in the field. By the end of the war 20 such mobile units, affectionately called "Petites Curies," were in service in addition to some 200 permanent posts that Madame Curie established. Constant improvements and changes were made to the improvised Petites Curies, and Madame Curie added to her renowned expertise in Chemistry and Physics the repair of truck engines and tires. A breakthrough that greatly aided the use of x-ray in the field came with the process developed by French radiologist Charles Vaillant that used treated paper to capture the images instead of glass plates.

Accompanying Madame Curie on that first drive to the front was her first assistant, her 17-year old daughter Irène, who would continue play a critical role throughout the war. When she was not working at her mother's side, she trained personnel, including American officers when they arrived in 1918.

Back at the Radium Institute, 180 women were trained by Marie and Irène Curie and qualified as x-ray technicians to operate the x-ray equipment. In a letter to the director of the French Health Services, Madame Curie wrote in December, 1914 that responding to a request from the Belgian Army, "I arrived at Furnes with a radiology car of which the equipment belonged entirely to myself and with which I worked in different locations."

Madame Curie and Irène worked night and day for a week in the area to help care for the stream of wounded. Calling her a tireless worker, a doctor reported that within a half-hour of arriving Madame Curie had established an x-ray unit in a school and began providing x-rays of every case they sent.

It is estimated that 1.2 million wounded were examined thanks to either the Petites Curies or the fixed x-ray units Madame Curie established, providing military doctors with roadmaps for injuries that enabled them to more rapidly locate and treat wounds. Some 900,000 exams were routinely performed during the last two years of the conflict. The effort, she wrote, "gave to radiology, as a method of medical diagnosis, a place corresponding to that which it is capable of offering, not only in time of war but also in time of peace."

Researchers from the University of Jyväskylä and the Central Finland Health Care District have developed an AI based neural network to detect an early knee osteoarthritis from x-ray images.

At the annual RSNA meeting in Chicago, Carestream launched a new series of digital X-ray detectors to help improve clinical outcomes, as well as enhancements to its existing product portfolio. 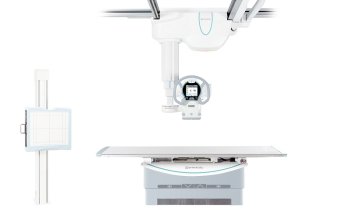