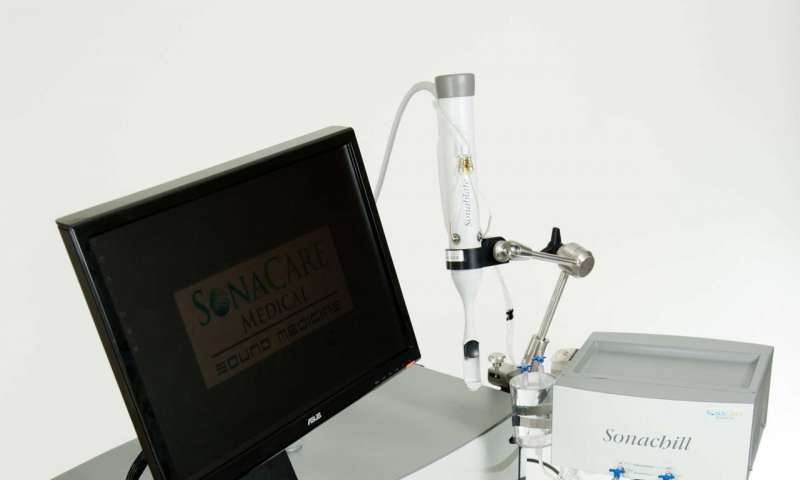 The study was funded by the Medical Research Council and SonaCare Inc., who manufacture the ultrasound equipment used in the procedure.

The research is the largest ever study of HIFU treatment used to target prostate tumours. The treatment is similar to a 'lumpectomy' for other cancers – where doctors remove only tumour cells, leaving as much healthy tissue as possible. The findings found that after five years the cancer survival rate from HIFU was 100 per cent. Approximately, 1 in 10 men needed further treatment. The cancer survival rate from surgery and radiotherapy is also 100 per cent at five years. The research also showed the risk of side effects of HIFU, such as urinary incontinence and erectile dysfunction, were lower than other treatment options, at 2 per cent and 15 per cent respectively.

Professor Hashim Ahmed, lead author from the department of Surgery and Cancer at Imperial, said: "Although prostate cancer survival rates are now very good, the side effects of surgery or radiotherapy can be life-changing. Some patients are left requiring multiple incontinence pads every day, or with severe erectile dysfunction." He added: "We need to now focus on improving the quality of life for these men following treatment. This latest trial of focal HIFU – which is the largest and longest study of the treatment to date – suggests we may be able to tackle the cancer with fewer side effects."

Prostate cancer is the most common cancer in men in the UK, with around 47,000 cases every year. Surgery and radiotherapy to the entire prostate are effective treatments but can lead to long term risk of urinary problems, like incontinence, of between 5-30 per cent. They also carry a risk of erectile dysfunction of between 30-60 per cent. Radiotherapy can also cause rectal problems like bleeding, diarrhoea and discomfort in 5 per cent of patients.

HIFU is a newer treatment, performed under general anaesthetic, which delivers beams of high energy ultrasound directly into the prostate gland, via a probe inserted up the back passage. There are no needles or cuts to skin. This allows a surgeon to precisely target tumour cells within the gland to millimetre accuracy, with less risk of damage to surrounding tissues.

In the new HIFU study, conducted on men with an average age of 65 and whose cancer hadn't spread, the risk of urine incontinence (defined as requiring pad use) at five years after the treatment was 2 per cent, and the risk of erectile dysfunction 15 per cent. The team say the results include patients with medium to high risk cancer. The scientists also tracked the number of patients who needed further treatment following HIFU, (such as surgery or radiotherapy), to treat any cancer cells that had returned. They found 10 per cent of patients needed further treatment by five years, which is comparable to number of patients needing further treatment after surgery or radiotherapy (5-15 per cent).

Spring can be felt, though many visitors of ECR 2015 probably only have time to enjoy the floral decorations in the conference center. The program of the conference is packed full of topics that…

The crucial role of radiology in prostate cancer diagnosis and therapy

Emphasising the crucial partnership of radiologists and urologists in the treatment of prostate cancer, Professor Arnulf Stenzl, Medical Director of Urology at the Tübingen University Hospital,…

Tissue removal is currently the only way to verify suspicious lesions in the prostate. It is also a key requirement before treating prostate carcinomas. The standard biopsy is performed with…