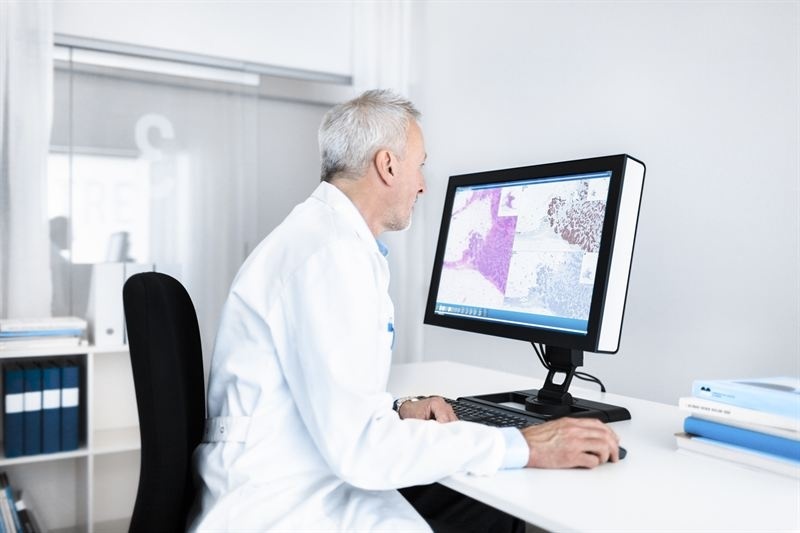 What was so enjoyable about the Sectra system was the confidence it instilled; you felt more in control of a slide on a screen than using a standard microscope.

Using a Sectra digital pathology system within his department at Salford Royal NHS Foundation Trust in north-west England, a pilot study highlighted how digital pathology speeded up diagnosis and workflow, and particularly had advantages within the context of the multi-disciplinary team (MDT) meeting.

With his neuropathology unit at the 728-bed Salford Hospital used to pilot the system by Sectra – which has an established track record in PACS systems for radiology – the benefits quickly became apparent; the digital system was used to navigate through a slide on screen. ‘We soon felt far more confident and at ease navigating through a digital image than the slide on the platform,’ du Plessis said. ‘I’ve been doing microscopy for 20-30 years, but it only took me 2-3 days to almost abandon one in favour of the other.

‘The digital screen was definitely my preferred first port of call and, for most of the cases, I was happy to do all reporting on the screen without having to look at slides under a microscope. What was so enjoyable about the Sectra system was the confidence it instilled; you felt more in control of a slide on a screen than using a standard microscope.’

Currently, his network is not fully digitised; for real-time diagnostic smears, surgeons send a sample to the lab and await a rapid stain and assessment, but digitisation will speed that up considerably and also facilitate wider information sharing over secure internet links, such as with neighbouring centres in Liverpool and Preston.

With storage space at a premium within the NHS, having everything digitised rather than on glass slides will avoid the expense of maintaining a large slide archive, either on-site, or with a commercial storage organisation off-site, and from a clinical governance perspective obviates theDrisk of slides breaking, being lost or misfiled.

The ultimate driver in having a hospital move to digital pathology, he said, is cost and time; more rapid turnaround and more efficient use of pathologists’ and lab staff time. This was particularly visible in MDT meetings, where previously slides had to be retrieved by support staff, carried to the meeting, shown on microscopes and then re-filed.

With images digitally available, they can be retrieved and easily displayed with a focus on specific areas of interest. ‘It rekindles people’s interest in histology because it’s done in such an efficient and quick way,’ he said. ‘You can show how a tumour has changed over time, with just a few clicks; you can’t do that with the microscope set-up.’

It enables the MDT to be linked to different centres, with second or third opinions, and the pathologist can marry images with radiology on the same platform.

‘It has boosted pathology, which has become a far more efficient partner in the MDT meeting,’ said du Plessis, adding that there are also work-life balance opportunities, with pathologists able to do some of the reporting at home, and there are also patient benefits in that a growing proportion of cases need to be double reported.

‘Neuropathologists tend to be in smaller units within a larger general pathology unit, so there might be only one or two people to look at a case,’ he pointed out. ‘Digital pathology allows units to link up and benefit from forums that can contribute to consensus diagnosis. Difficult cases can be quickly shared in a network that enhances diagnostic accuracy and reliability.’

This has huge advantages for the patients in terms of quality assurance, robust objective reporting, and less subjective vagaries of individual reporting. Significant benefits at his practice: ‘Our basic skills will remain the same, but I think we will become far more efficient. As said, it will bring us out of our dark backrooms, allowing for far greater cross talk than in an individual isolated practice and that will be of much benefit for patients.’

Pathology digitisation is inevitable du Plessis believes, concluding: ‘If a number of high profile departments implement digital pathology, word will spread about how beneficial this system is, then there will be peer pressure on other departments to conform.’

Profile:
South Africa born Daniel du Plessis gained his MB, ChB degree from the University of Stellenbosch, where he also studied anatomical pathology. Appointed consultant histopathologist at Tygerberg Hospital, in Cape Town, he then moved to the Walton Centre for Neurology and Neurosurgery in Liverpool, England, holding training and research posts from 1998 to 2003. Additionally, in 2002 he became a Fellow of the Royal College of Pathologists, with subspecialty accreditation in neuropathology. Appointed consultant neuropathologist at Salford Royal Hospital NHS Foundation Trust and the Greater Manchester Neurosciences Centre in 2003, he is now the Clinical Lead at the Department of Cellular Pathology, at the hospital, and an honorary lecturer at the University of Manchester Medical School.

The digital age in diagnostics dawns

Pathologists in Utrecht step away from the microscope as the first fully digital workflow goes live for primary diagnostics. ‘The whole world wants to stop by and see the show,’ said Paul van…