An innovative composition of the material based on eggshell-derived bioceramic provides increased strength and biointegration of implants. The results of the work were published in the international scientific Journal of Asian Ceramic Societies.

Polymethylmethacrylate (PMMA) is a synthetic polymer used by surgeons as a “bone cement” due to its self-curing and strength properties. But this material is bioinert by its nature, therefore it has a weak chemical and biological interactions with living tissues and hardly integrates with bones. Scientists are actively investigating PMMA in order to"optimize" it for wider application in various biomedical fields, for example, ensuring reliable fixation of artificial joints/implants, dental fixators, closure of cranial defects in various injuries, etc.

The team has solved this problem by modifying polymethyl methacrylate adding diopside, a material from the category of silicate bioceramics. It is known for such properties as lack of toxicity to living cells, biodegradability and the ability to stimulate osteogenesis — the formation of bone tissue on its surface. “Eggshells have health benefits such as bone mineralization and growth, treatment of osteoporosis and are therefore used as a bone graft. We have adopted a cost-effective approach to recycling biowaste to improve the quality of life for patients with bone disease. For the production of composites, diopside obtained from eggshells was used,” says Inna Bulygina, co-author of the study, iPhD student in Biomaterial Science at NUST MISIS. 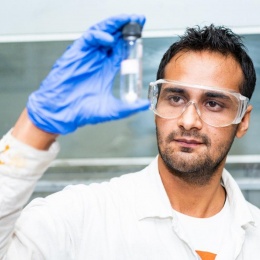 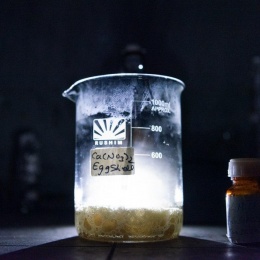 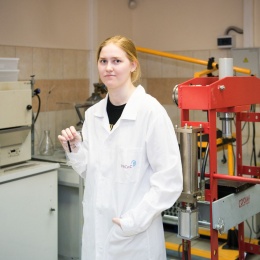 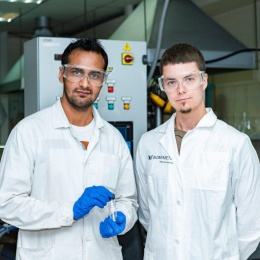 The developers proposed to optimize the material by adding bioactive ceramics to the PMMA polymer matrix. “As a result, we got a porous composite PMMA/diopside material, which was produced by the solvent casting method. During the experiments, we tried different proportions of diopside — 25%, 50% and 75%, ” added Rajan Choudhary, one of the authors of the development, PostDoc at NUST MISIS.

According to the scientist, the process of bone formation and resorption is known to be regulated by several agents, including growth factors, proteins and hormones. At the same time, various ions, such as phosphorus, calcium, strontium, magnesium and silicon dioxide, are involved in the regeneration, mineralization and metabolism of bones, and it is these elements that ensure the introduction of diopside into the composite. “The samples containing 50% diopside have shown the best result — they have demonstrated a 4-fold increase in compressive strength, and after 4 weeks of in vitro testing have shown a good ability to deposit bone minerals on their surface. At the same time, we have found that the mechanical properties of the obtained porous composites correspond to the properties of the spongy bone of the human body,” says Rajan Choudhary.

According to scientists, waste from agricultural and food industries can be used for the industrial production of surgical material. However, collection, cleaning and recycling will require separate waste collection. Currently, the developers are completing a series of laboratory tests of the samples obtained.

Researchers know that electricity can help speed up bone healing, but “zapping” fractures has never really caught on, since it requires surgically implanting and removing electrodes powered by an…