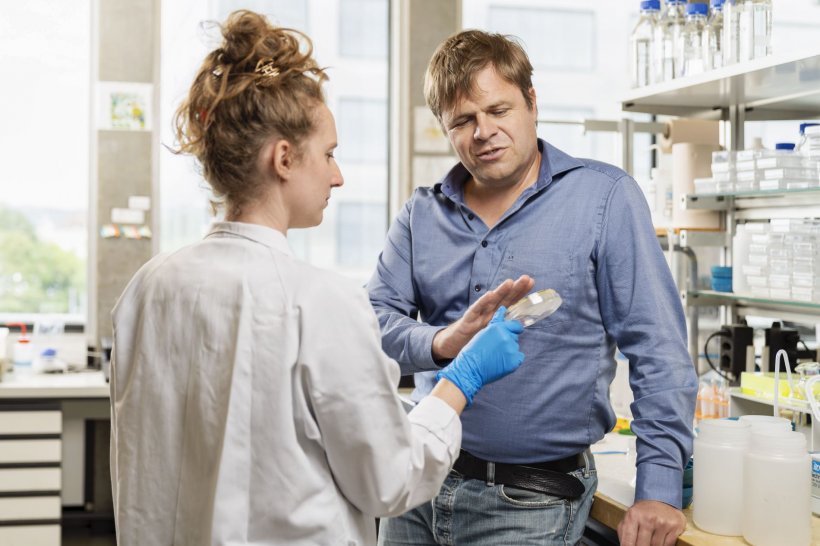 Sebastian Hiller, professor at the Biozentrum of the University of Basel, and his team clarified the amazing mechanism of action of the antibiotic darobactin

Researchers have now been able to elucidate the mechanism of action in a project funded by the Swiss National Science Foundation (SNSF) under the National Research Programme “Antimicrobial Resistance” (NRP 72). In a study published in Nature, the researchers describe how a deceptive manoeuvre enables Darobactin to work: its shape mimics a special three-dimensional structure normally found only in proteins produced by bacteria as building blocks for their outer membrane. The structure is the “key” for inserting the proteins into the outer shell at specific locations. Darobactin is a copy of this key. However, it does not act to penetrate the bacteria, but merely blocks the keyhole from the outside – like locking a door and then breaking off the key. As a result, the transport route for the bacteria’s shell components is obstructed and they die.

Similar mechanisms are already known in microbiology and are used by other drugs. The targeted binding structures, or keyholes, are usually quite large – at least in microbiological terms. In contrast, the target inhibited by Darobactin is very small and cannot be detected by conventional methods. At the same time, Darobactin is larger than most drugs and cannot get through the entry ports of the bacteria. “At the beginning, we were puzzled by this,” say Sebastian Hiller and Timm Maier of the Biozentrum of the University of Basel, the two principal authors of the study. Their teams immediately realised that Darobactin does not act inside the pathogens but rather on the surface. There it interferes with the function of a protein known as BamA, which plays a central role in the construction of the double-protective membrane. “But how exactly Darobactin interacts with BamA was completely unclear,” says Hiller. It was only by combining several methods that the researchers finally identified the mechanism of action.

They discovered that Darobactin attacks a true Achilles heel of the pathogens: it binds directly to the most important site of BamA, the so-called backbone atoms. Because these atoms hold the protein together and determine its shape, it is nearly impossible to change them – though changing them would be the usual way for the bacteria to fend off a new antibiotic. In fact, Darobactin retained its effectiveness against all pathogens, for which Hiller and his team conducted laboratory tests that simulate resistance. In other words, the pathogens failed to change the broken lock.

These findings are a decisive step towards medical application, says infection biologist Dirk Bumann, who also conducts research at the Biozentrum in Basel. As co-director of the National Centre of Competence in Research (NCCR) “AntiResist”, which like NRP 72 is funded by the SNSF, he closely follows activities in antibiotics research. “Identifying Darobactin’s mechanism of action is a major achievement,” he says, “because it will enable further targeted improvement of Darobactin and its development into an effective drug”. That gives a boost to the long-cherished hope of finding a new generation of antibiotics to fight many of today’s problem pathogens.

Antibiotic Armageddon in Europe by 2025