Because there are still too little incentives that facilitate women’s professional development, a leading Spanish neurosurgeon shared her experience to raise awareness in a course on diversity during the recent EANS meeting.

Only 5% of managing positions in neurosurgery are chaired by women in Spain. Dr. Idoya Zazpe is one of them, being Head of the Neurosurgery Department at Navarre Hospital Complex in Pamplona, close to France. “My parents worked very hard to give my sister and I an education. I studied medicine and became the first graduate in my family,” she said. She was also the first woman in her department when she started working at the Pamplona institution in 1999. Today, Zazpe is heading a very gender balanced team comprising three female consultants and three male consultants, as well as a few residents. In the meantime, Zazpe married husband Carlos Beaumont, an emergency physician working at the same hospital, and the couple had three children: Maite, currently 13, Ignacio, 11, and Amaya, 7.

Women are expected to be perfect professionals and also perfect mothers and wives. This stereotype promotes unreachable perfectionism and frustration in women

Although she is quite an exception in her field, she feels ordinary, “being a wife, a housewife, a doctor and a mother.” However, she admits to be luckier than most. “I could overcome many of the barriers preventing professional development in women. Unfortunately, many other women couldn’t,” she said. Social expectations for men and women are not the same and are usually higher for the latter. “Women are expected to be perfect professionals and also perfect mothers and wives. This stereotype promotes unreachable perfectionism and frustration in women,” she said.

Video • 'Women in Focus' at ECR

Getting to the top, staying feminine

Women continue to lead a rather marginal existence in medicine. Although there are now more female than male medical students, professorships and directorships are almost exclusively held by men. This imbalance was addressed with the lecture series ‘Women in Focus’ at the 2019 European Congress of Radiology (ECR).

Attitudes have changed radically in Spain over the last decades, with fathers increasingly taking on their share of family duties and landmark social achievements, such as the 12-week paternity leave. “My father did not change a nappy in his life and that was normal for his generation. But my husband shares duties as most men do. He spends as much or even more time with the kids than myself and has taken multiple paternity leaves,” Zazpe said.

Neurosurgery: a field with glass ceilings

Spain is also the European country with the highest number of women finishing medical school. 70% of medical students and 65% of residents and more than half of the consultants are women. Nevertheless, neurosurgery has not fully soaked up these advances yet, data published by the Spanish Medical Colleges Organization (OMC) in 2018 showed. Neurosurgery is the third most masculine specialty in Spain, with women neurosurgeons accounting for one third of consultants, 40% of residents, and less than 5% of managing positions in neurosurgery. “I only know three or four people with that job in my country, and there are 75 neurosurgery departments. That’s a clear example of a glass ceiling,” she said.

It is also said that child bearing discourages women from specializing in surgery and vice versa. It’s not just a Spanish situation: in the United States, only 50% of women neurosurgeons are mothers. 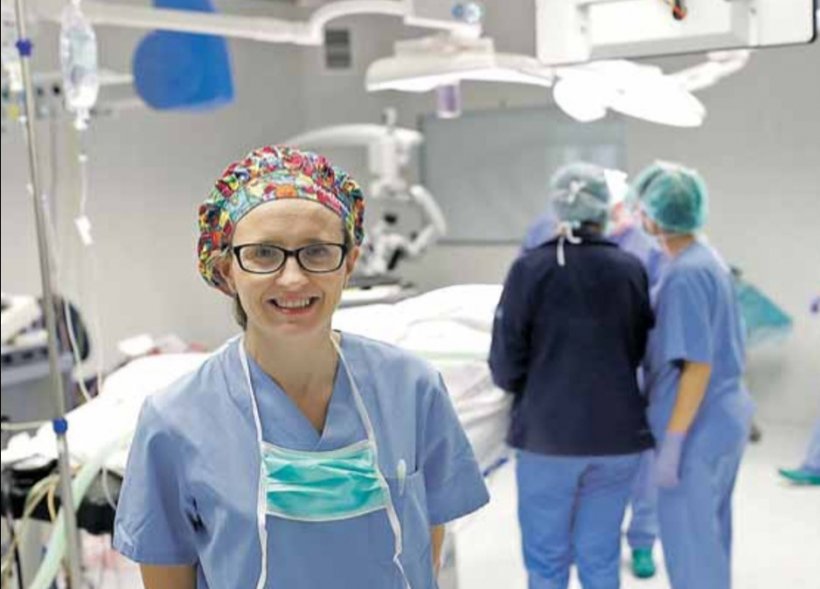 Having a child or a career in neurosurgery: Why not both?

Both childbearing and neurosurgery are very demanding tasks but they are not in any way incompatible, as her example shows, but women need incentives that they can have both. “We need to facilitate women’s professional development and aim at conciliating family and work for both men and women and society in general,” she said. More objective data that could be collected through surveys by EANS would be very useful to clarify situation of women and neuroscience in Europe and assess career disparities.

In the U.S., associations such as Women in Neuroscience (WIN) and Women in Neurosurgery (WINS) work to promote the professional advancement of women neuroscientists. Zapze notably received an award from the latter in 2018 for her work on being a woman and neurosurgeon, that she presented during the Congress of Neurological Surgeons. She remains confident that, in the near future, social advances will make such associations redundant. But until then, they are necessary to achieve social improvements, she believes. “Efforts should be made to eliminate obstacles that are related to economical situation, gender, disabilities and socio-cultural differences, and promote work life balance in order to guarantee equal opportunities.”

Balancing professional and personal life is a tough exercise, Zapze admitted. “I wouldn’t have done it without the support of my family and my husband. It’s hard for the family; it’s also a sacrifice for our kids. Very often, the first thing they ask when they wake up is if we’re on duty on that day. That’s very hard to hear,” she said.

Another issue to consider for women neurosurgeons who want to have a baby is radiation exposure. This additional worry is best kept under control by using a dosimeter while at work and talking openly with one of the hospital’s radiation physicians. Being fit, having a healthy lifestyle and being flexible are other keys to success, according to Zazpe. “My days are demanding so I have to take care of myself. I usually start in the morning with yoga and try to remain mentally flexible to be able to make last minute decisions, for example when children get sick and we have to work,” she explained.

In spring 2020, following the first wave of the Covid-19 pandemic, Spain experienced one the toughest lockdowns in the world, forbidding notably children to go outside for almost 8 weeks and closing schools within 24 hours on March 11th until they re opened on September 7th. As teleworking became the norm, physicians also took their practice home, leaving those with children to combine work and the education of their offspring without help. This radical change in the Spanish lifestyle, which has traditionally relied on grandparents’ support, has challenged many families’ already complicated schedules. “Lockdown has impacted work-life balance. Children were at home, operating sessions were reduced and I started working at home. We had open access to clinical database and used to do some consultation work and telling patients tests results by phone. We came more or less to “normal" again, for the moment,” Zapze said of her own experience.

But quoting Harvey Cushing, a pioneer of brain surgery known for his inspirational thoughts, she wants to remain positive. “The extraordinary nature of human often arises in adversity, Cushing said. That very much applies to Covid-19 times. We will come out reinforced after this pandemic,” she concluded.

Dr Idoya Zazpe is Assistant Professor at the University of Navarra and Chief of the Neurosurgery Department at the Navarre Hospital Complex in Pamplona, Spain. She is also Co-editor of the Spanish Neurosurgery Society Journal. Her areas of interest are neurosurgical oncology, skull base and endoscopic surgery.

Surgery in a wheelchair: breaking barriers in the OR and beyond

You don’t need to stand up to stand out. A few decades ago, a little boy believed he could tend to patients in spite of being in a wheelchair – and he did. During the EANS 2020 virtual meeting,…