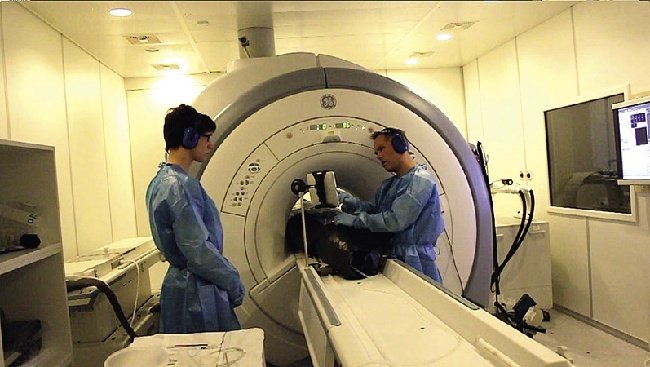 Martin Rube, from the Institute of Medical Science and Technology in Dundee/Scotland, ably sums up the layout and paraphernalia: ‘This conventional arrangement is cumbersome, slow, and produces risks as well as sometimes a less than perfect result. Advanced communication technology provides a much more convenient and safer solution.’

At the recent CARS 2013 congress in Heidelberg, he presented a rather different approach based on various wireless devices such as the iPhone, iPad, or trackpad, mouse and glass fibre connections. To avoid RF interference, the concept is optical transmission; a converter ensures the connection from the optical fibre endpoint to the devices and vice versa. Bluetooth, W-LAN or a WiFi router are networking technology options, with an aerial positioned in the MRI room. For interfacing, the group uses either real-time or a VNC (virtual network computing) client. Neither the real-time interface nor VNC client have clinical approval and therefore can only be used for research.

This setup allows for communication and wireless remote control of the MRI within the magnet room, while maintaining a sterile environment. It was created for research purposes in Dundee, and was also previously used at the University of Stanford Medical School in the USA. An additional version was created for mobile use at other sites and has already been tested in Frankfurt, Germany and Sheba Medical Centre in Tel Aviv.

In Dundee, the wireless approach (iPad) was used mostly in Thiel soft-embalmed human cadaver models, on abdominal percutaneous interventions such as liver biopsies, as well as for ablations. Dr Rube reports that a broad range of further possible applications exists, e.g. cardiovascular interventions. Interventions for which highly focused ultrasound (HiFU) is applied, e.g. in myomas ablation, the temperature and necrotisation can be monitored using MRI guidance. The Dundee group is developing this technique further for ablation of liver tumours under respiratory motion.

In Stanford, the arrangement was applied to visualise and monitor a respiratory motion signal and to manage the high-intensity focused ultrasound (HiFU) beam: the physician touches the region in the image on his/her mobile device to define the target for the beam. At that university, a 3-T MRI device from GE is used, as well as a tablet from HP.

The research group achieved its goal: the wireless setup allows the surgeon to set parameters and navigate directly from the patient table, Dr Rube explained. ‘This helps bring speed and quality to interventions. Our tests show that this setup works,’ he emphasised. ‘The challenge is now to convince scanner manufacturers that they should get the CE mark and FDA approval for this setup.’ The configuration, he said, also suited multi-modal environments very well, including, for example the combination of MRI with ultrasound.

‘We finally have tools to non-invasively study the human brain in normal subjects and diseased patients,’ says Professor Stefan Sunaert, Head of Translational MRI at the Department of Imaging…

Advancing magnetic resonance imaging (MRI) up the Tesla scale may sound good, but will it produce the results and patient safety radiologists actually desire? Faced with the question: ‘How many…