These multimodal data are then combined and permanently mapped onto one another, meaning that the high-contrast MRI images can still be utilized, in combination with the live ultrasound images, once the patient is no longer inside the MRI scanner. In other words, only one MRI scan is required at the beginning of the biopsy procedure. Afterwards, the biopsy can be safely performed under the guidance of a combination of real-time ultrasound images improved with MRI contrast.

When doctors discover a tissue abnormality, the next step is generally a biopsy in order to determine whether the suspected tumor is malignant or benign. As a rule, this involves a series of MRI scans, whereby the patient is repeatedly placed, in a supine position, within the confined tunnel of an MRI scanner. All in all, it is a time-consuming procedure. “At present, the patient is given an initial MRI scan and then removed from the scanner,” explains Dr. Marc Fournelle, scientist at the Fraunhofer Institute for Biomedical Engineering IBMT. “On the basis of this scan, the doctor now plans the needle path during the biopsy. The needle is then inserted a little way into the patient’s body, and a second scan is taken in order to monitor the position of the needle. The doctor successively advances the needle into the patient’s body, pausing after each step in order to conduct another MRI scan so as to check the position of the needle.”

In a project designed to shorten the time required for this procedure, scientists from Fraunhofer IBMT have now teamed up with fellow scientists from the Fraunhofer Institute for Digital Medicine MEVIS and from Saarland University Medical Center. KoMBUS aims to combine the virtues of MRI and ultrasound in an MRI-compatible ultrasound system. The idea behind KoMBUS is to reduce the process to one MRI scan, with all the planning for the needle path and the actual tissue biopsy being performed under ultrasound guidance. This improved procedure not only brings about an increase in patient comfort; it also allows saving expensive MR-scanner time and thereby reduces the costs of diagnosis.

The MRI-compatible ultrasound system produces ultrasound images in parallel to the MRI scan and maps one onto the other. In effect, this provides the physician with an MR image of the patient’s current breathing phase, despite the fact that the patient is no longer in the MRI scanner. This combination of high-contrast MRI images and live ultrasound images enables to plan the needle path without the need for repeated MRI scans. “Each time the patient breathes in or out, the positions of the internal organs shift,” Fournelle explains. “The physician must therefore plan and perform the biopsy in one and the same breathing phase. Otherwise, the organs will have moved as a result of the change in lung volume and there is a risk that the needle will be off target and fail to hit the suspect tissue.”

This new system from the Fraunhofer team simultaneously produces both ultrasound and MRI images over several breathing cycles while the patient is in the MRI scanner. An MRI scan is conducted for each breathing phase, with the result that low-contrast lesions are also visible when scanning with ultrasound by showing the corresponding MR image. Once the patient has been removed from the MRI scanner, the system employs special algorithms to identify the current breathing phase on the basis of the live ultrasound images and then searches through the recorded MRI datasets for the scan that corresponds to that precise breathing phase. For less-experienced physicians, this new system provides valuable assistance. Another advantage is that it reduces demand for MRI time, which is expensive and often oversubscribed. This new MRI-compatible ultrasound system marks a key step in the development of alternative MRI-guided biopsy methods, in that it reduces demand for MRI time without impairing the quality of care.

The system comprises an MRI-compatible monitor, two ultrasound transducers and MR-compatible multichannel ultrasound electronics. One of these ultrasound probes is for tracking patient motion. It is fastened to the patient’s body and generates live images of the movement of the inner organs. The second (handheld) probe can be used for real-time monitoring of the needle position following the MRI scan. Also included in the system is software used to plan the needle path, which was developed at Fraunhofer MEVIS in Bremen. This tells the user when the patient is in the ideal breathing phase and displays the MR scan corresponding to the actual phase. In addition, the software also proposes an optimal needle path, including the needle target and angle of approach.

Tests on a phantom model have demonstrated the proper functioning of the hardware-software combination. Proposals for clinical studies have now been submitted, and these are expected to get under way over the next few months at Saarland University Medical Center. In addition, the research team will be presenting an initial demonstration model of this system at the joint Fraunhofer booth (Hall 10, Booth G05) at the MEDICA trade fair in Düsseldorf from November 18 to 21, 2019. 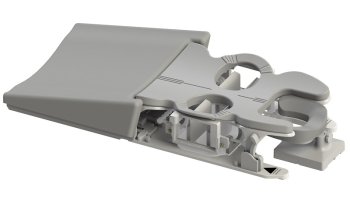